Lessons from a Labyrinth in Dublin

Lessons from a Labyrinth in Dublin April 4, 2019 Casey Tygrett

The day we went to Christchurch Cathedral, the day I walked the labyrinth, was warmer than we had expected.

My wife, daughter, and I were on vacation in Dublin, Ireland. The late March skies clouded and receded all day long, testing our trust of weather apps and local meteorologists. But the skies held and we remained dry all day.

It was a bucket list item for me to see the land from which I came, I suppose. It’s hard to tell where we really came from, isn’t it? Even with the Ancestry.com or 23andMe genealogy tools, it seems stories passed down from generation to generation are far more compelling than our genetic code.

Ever since a night in college where a long-lost family member called me and asked to meet, I held the story of my native roots in Ireland. The green rolling hills, the Celtic history of saints like Brigit, Patrick, and Kevin, created an urge to see this ancient and troubled place. 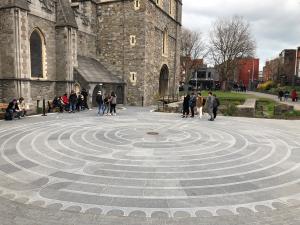 With a day to adjust to the 5-hour time difference, we walked towards Christchurch Cathedral. We listened as diverse accents and languages whispered through the crowd.

Buses and taxis raced to destinations both mundane and unique. People moved by with headphones and heads down, obviously Dublin natives headed to their normal Monday.

Christchurch rose on our left, some 8 feet below the level of the main street. Grey stones stacked for centuries, older than the country from which I came.

The structure itself is fascinating, but it was the courtyard and the labyrinth embedded in the concrete that drew my attention.

For the last 10 years, walking the labyrinth has been a beneficial spiritual practice for me. The labyrinth is a unicoursal layout. A maze is different. In a maze there are multiple paths you can take, including the correct path to the center. In the labyrinth there a single path into the center. The person walking then has one simple job. The walker releases control of the journey, knowing the path is set, and instead focuses on the relinquishment of control.

For those of us who are tasked with many different things at once, aka everyone, this is a helpful practice.

On the journey to the center, we let go of control in order to receive the power of grace.

Holley saw the glint in my eye and said, “Go head and walk.” I headed for the entry, so familiar in form but new in location. I had walked the labyrinth before, but never in the shadow of a 16thcentury cathedral.

As I walked, tourists cut across the courtyard; they cut across the labyrinth. We dodged each other: internally I was at work releasing some challenges but to them I was another body in a public space.

The path to me was a discipline, to others they had no idea what was beneath their feet.

Of course, this is how life works. While we purchase a gallon of milk or a pack of cigarettes, someone just behind us is having it out with the Divine. There are these little miracles that attend to us every day, if we are willing to stop and look.

Each step in the labyrinth is one of freedom.

Without control of where you’re going, you learn to lean into something else. Our days are typically filled with choices and actions, but to simply walk without choice – save to keep walking – is incredibly freeing. The only action required is the firing of neurons and the movement of one foot in front of the other.

Which brings us to another point. I’m all for mystery, the unfathomable nature of God. I walked a labyrinth in the country that basically saved Christianity (and possibly Western civilization) with its mystics like Patrick, Brigit, and Kevin. The Celtic Christian belief in the Trinity isn’t some disengaged theory, but a concrete thing.

The Celts would bring a new baby into the home, walking three times around the room towards the sun. Then, they would pass the baby three times above the fireplace hearth as a symbol of purification. A triad of water droplets drip, drip, dripped onto the baby’s forehead. The triune nature of everything said that the Trinitarian view of God was a view that dilated everything a person saw.

Sometimes life with God is mystery but most of the time it is putting one foot in front of the other.

Near the end of the labyrinth walk, near the center, I looked up to see two little girls sitting within the center of the labyrinth. They were having an impromptu picnic. Given the accents of their parents, they hailed from Eastern Europe.

These two little girls immersed themselves in the joy of crackers, cheese, and juice. At the center of the labyrinth, the place where we come fully stripped of control and ready to relinquish something. There, and only there, a picnic commenced.

Is there anything better to do when you are fully enmeshed in walking with God? Yes, sometimes we lament. Other times we confess. But when Jesus’ presence cast the strongest light, typically there was food involved.

At the end of my walk there were innocent little ones celebrating. Toasts with juice boxes and laughter hit the high note of the Divine, and I watched them in their glee.

My wife and daughter waited on a nearby bench.

We moved on to the next thing, the rest of the trip. It was wonderful.

But when we begin to realize we are all on some kind of holy amble around our world, something shifts. We see things differently.

We may realize we are walking across a path, ignorant of its goodness, and instead turn and pay attention.

Or we may need to toast with juice boxes knowing that the God-as-Three attends to each of us in joy.

May you find a labyrinth to walk, noticing the goodness of it all. In turn, may you toast to the life of relinquishing control and finding joy in the things right below your feet.

April 7, 2019 Rich Mullins and the Wideness in God's Mercy
Recent Comments
0 | Leave a Comment
Browse Our Archives
get the latest from
General Christian
Sign up for our newsletter
Related posts from Everything Becoming

For Auld Lang Syne
by, Christian Lingner As this holiday season came to maturity within me over...
view all General Christian blogs
What Are Your Thoughts?leave a comment
Copyright 2008-2020, Patheos. All rights reserved.