Rich Mullins and the Wideness in God’s Mercy

My wife-to-be and I sat in the living room of what would be our first townhouse. I opened the jewel case, not a jewelry case but the old-school plastic containers in which CDs live. I pulled out Rich Mullins’ Songs Vol. 2 and clicked to the track called “The Love of God.”

“This song gets me,” I said. “For whatever reason.” 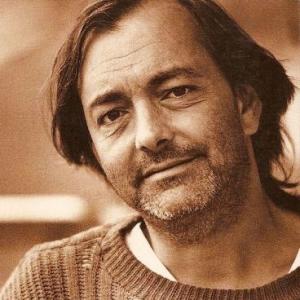 In the last few weeks Rich’s name has come up in a few different conversations. Many of us who know his songwriting and influence aren’t surprised that even 22 years after his death he still carries weight.

With songs like “The Love of God” and “Hold Me Jesus,” Rich was able to gather the experience of normal, flawed followers of Jesus in a way that helped us believe there was hope. The “original ragamuffin,” Rich was a man whose life exemplified the word “journey.”

One of the touchstone books of my life is my friend James Bryan Smith’s biography of Rich, An Arrow Pointing to Heaven. James paints the beauty and complication of Rich’s way in this world, from struggling with his own personal spiritual battles to finding his way in the commercial enterprise that is Christian music.

Rich Mullins’ journey is one that feels oh-so-familiar to so many. That’s why I believe his voice still speaks.

Many of my conversations about Rich today end with, “I wonder what Rich would say about_______.” The interest in Rich’s opinion on everything from church to politics to music in the present frame says something about his wisdom. His wisdom felt like that shirt we have in our closet. We’ve had it for years. It is well-washed and well worn, full of memories. It is comfortable now, only because we’ve put it through the wringer on more than one occasion.

Rich’s life and music is a gift to those of us who know the “wringer.”

One of my great hopes is that as the generations move forward, Rich’s voice and music continues to resonate. I remember talking with a friend who leads worship at their church, and I suggested one of Rich’s songs for communion. The song “Peace (A Communion Blessing From St. Joseph’s Square)” is one of the most moving reflections on the bread and wine, but I was surprised at my friend’s response.

“It just, well, it sounds dated.” I could tell it hurt my friend to admit this, but yes, there’s a ring to Rich’s music that comes from a period where reverb and synthesizers were as important as bright colors and enormous hairstyles.

While I understand somewhat, I am afraid.

We may have changed musical styles, but we have not outgrown the path of the ragamuffin. Perhaps now more than ever, the journey of faith has split the world into fanatics and the apathetic. In or out. With us or against us.

Rich was never one for the divide. Despite his faults and demons, he attempted to find where Jesus was and to join Jesus in whatever he was up to. This kind of journey leads to imperfection attempts, for sure.

It also leads to blessed, insightful moments where those watching get to see what revolutionary love can do in the life of an ordinary person.

I have my issues with Rich as well. I think the theology of “Awesome God” overemphasizes a wrathful, to-be-feared God which is at odds with the kind of God Rich obviously followed. Perhaps if he were here today he would edit his own theological history in that song as well.

Then again, haven’t all of us held beliefs about God that we’ve edited or left behind later?

Yet there is something compelling in songs like “Here in America” and, of course, “The Love of God” that still move me today.

As the CD played in our first apartment, Holley and I listened to Rich sing “There’s a wideness in God’s mercy/I cannot find in my own.”

I cried. We listened. Then we went on our own ragamuffin journey together.

May the way God revealed himself to Rich Mullins oh so many years ago not be wasted. May we remember the ragamuffin who gave his wisdom as generously as his finances.

April 4, 2019
Lessons from a Labyrinth in Dublin
Next Post

April 12, 2019 A TripAdvisor for the Soul
Recent Comments
0 | Leave a Comment
Browse Our Archives
get the latest from
General Christian
Sign up for our newsletter
Related posts from Everything Becoming

For Auld Lang Syne
by, Christian Lingner As this holiday season came to maturity within me over...

Glorify God with your Bodies: A Sexual Ethic...
Although my previous studies on sexual ethics help clarify sexual boundaries for...

A Psalm for our Yearning-for-Light-in-Darkness Selves
A couple of days ago, I sat staring at Psalm 90. Really,...
view all General Christian blogs
What Are Your Thoughts?leave a comment
Copyright 2008-2020, Patheos. All rights reserved.