We Become the Stories We Tell

We Become the Stories We Tell June 6, 2019 Casey Tygrett

The first big step in my spiritual formation came in a small church in southern West Virginia.

I remember the night clearly; the July heat pounding the concrete sidewalks, the blood red carpet and the faux-oak furniture in the sanctuary. 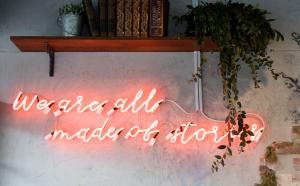 The message flying through the air was not new. Sin has wrecked humanity, and we all deserved death. Quite an opener, if you look at it objectively. But, then there was Jesus. The death and resurrection of Jesus meant we could be “washed by his blood” and made clean. We could be forgiven of our past sins, the sins tied to that desperate death-dealing older self.

The goal of life then followed. We are to grow to the point where we stop sinning. Then if we are discovered in a sinless and forgiven state when Jesus made His surprise return, then we would live with Him in heaven forever. The alternative was hell: a very real place of eternal conscious torment.

Of course, I’m giving language to these concepts now. I wouldn’t have understood eternal conscious torment at that point in my life.

I have written about this part of my life before, but I felt like bringing it up again. The reason being I came to an insight that reminded me about the power of story.

Specifically: we become the stories we tell.

The idea of sin or sinfulness isn’t new. I once heard someone say “The message of God punishing people with hell when they die is neither good nor is it news. Most people know what hell feels like because they’re living in it right now. What they need to know is the alternative.”

It is very important that you and I come to terms with the story we tell ourselves regarding sin. The theological tradition we grew up in has a hand in this. Many who come from a Reformed or Calvinist position illustrate sin as “total depravity.” Other evangelical strains refer to sin as “that which separates us from God,” indicating also that we each have a “sin nature.”

A sin nature is that part of us that is predisposed to act in disobedience to God. Can it be overcome, fixed, or at least put on “mute”? Depends on who you ask.

These definitions of sin and a whole host of variations have been presented as the standard belief of Christians throughout history. However, there are some exceptions.

Early church father Gregory of Nyssa once said, “Sin is refusing to grow.”

Celtic Christians thrived in Ireland, Scotland, and Wales during the 4th through 8th centuries. However, they did not hold to the belief in “original sin” or the idea that that we are all born sinful. In fact, some historians mark the decline of Celtic Christianity as beginning with the Catholic doctrines of the West (first Rome, then England) such as original sin being forced upon the Celtic world.

Let me pause here: my goal is not to exhaust the discussion on the theology of sin (also called hamartiology). My goal is much simpler.

We will become the story we tell ourselves about sin.

Growing up in a more fundamentalist, fire-and-brimstone tradition I remember hearing about the hope of heaven. I heard messages of grace and God’s love, but the volume knob appeared to be stuck at 11 when it came to sin and damnation.

The reason is natural. In the story of salvation Jesus forgave my past-tense sins but the present and future tense ones left me vulnerable to death and hell. I remember after becoming a Christian, every time a thunderstorm came up I would begin praying in fear, saying “God if there’s anything out there I haven’t asked forgiveness for, let’s do it now.”

The reality is that this is not a relationship that is sustainable.

Relationships based on fear tell the story of avoidance, self-protection, and placation of the other. This isn’t the story of Jesus & the Gospels. Instead, this is the story of early folk religions where if the god of rain wasn’t happy with your sacrifice, your crops would die from drought.

The story of sin was about keeping the Divine away from the “rage button.”

The bumper sticker story says that sin will always destroy us, which is true to a certain extent. Yet that is only part of the story. Being more than just “forgiven” means that God sees us as more than just mindless being that spend our days trying to keep him off antacids.

We are not just slaves, we are friends (John 15:15)
At one point we were darkness, but now we are light (Ephesians 5:8)
We have been created very good, and God has never gone back on that idea* (Genesis 1:31).

*(Which is why I don’t accept total depravity, but that’s another story).

What happens when we live by the bumper sticker is that we accept spiritual mediocrity. We self-limit ourselves by saying “Well, I’m not perfect” and then excuse our own lackluster approach to health, growth, and maturity. And honestly, it makes sense in light of the bumper sticker theology.

Ultimately, the moment that I truly began to love the Christian faith is when I realized that God – even God through Jesus – did not need placation from me or anyone else. Instead, the Divine longs for my growth.

Sin was failure to listen, to look for wisdom, or to operate in self-destructive ways. However, it didn’t end a “streak” of being on my “best behavior.”

In the cases where I choose not to grow (as Gregory of Nyssa so adequately put it), sin became a chance to learn. Instead of chiding or turning from me, God turned towards me. In the consequences of my actions and the consternation of my emotions, He taught me. Love and forgiveness were not the carrot on the stick, they were assumed.

Easily as drawing breath, the guilt fell away.

The story I tell myself now is that sin is what happens when I begin to believe that I don’t live this life with God. When I cease to believe that the journey of “everything becoming” is the best thing that could happen to me, then the darkness comes.

God then comes, not with a hammer but with a light. That is the story I tell about me, God, and sin.

June 1, 2019
3 Podcasts That Challenged Me This Month
Next Post

June 10, 2019 King David, David Lynch, and a Dragon Walk Into A Bar
Recent Comments
0 | Leave a Comment
Browse Our Archives
get the latest from
General Christian
Sign up for our newsletter
Related posts from Everything Becoming

Visualization of Inner Freedom: Releasing Ourselves from Self-Fastened...
Sports psychologists use visualization. So do shamans and spiritual directors. Visualization...

A Response to a Recent Ponder Anew Post
As professional musician and scholar, I'd like to address some of the...

Teaching Thanksgiving: Advocating for a Better Way
Last year, Ava came home from school on the last day before...
view all General Christian blogs
What Are Your Thoughts?leave a comment
Copyright 2008-2020, Patheos. All rights reserved.