Say It Ain’t Poe: When Fake Letters Say Exactly What Too Many Christians Think 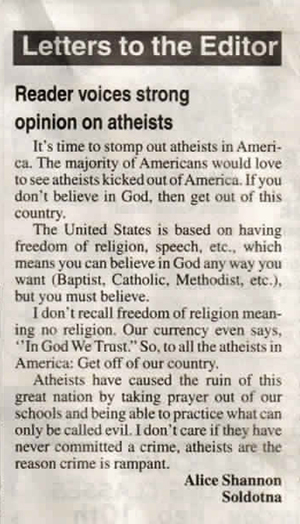 From time to time this editorial piece gets circulated in which a woman complains that atheists are what’s bringing America down.  It popped up again in my newsfeed recently and I have a couple of initial reactions:

1) A quick check with Snopes.com indicates that the woman to whom this letter is attributed did not actually write this letter.  In fact, once the newspaper that printed the letter dug around, they discovered that the same letter had already been submitted to another paper under a different name.  So you could file this under “hoax,” except…

2) It virtually quotes verbatim a list of points many of us have heard from real people so many times we’ve lost count.  Whether or not this letter was written in earnest, it verbalizes the earnest sentiments of thousands of people, maybe hundreds of thousands.  And it’s replete with fallacies and misunderstandings which deserve to be called out as often as it takes to rein them in.  Letters like this pass as believable precisely because they accurately reflect the feelings of so many people, despite their erroneous nature.

Poe’s Law states that “without a blatant display of humor, it is impossible to create a parody of extremism or fundamentalism that someone won’t mistake for the real thing.” This newspaper editorial illustrates Poe’s Law at work, demonstrating how easily parody and extremism can get mixed in together without noticing any difference.  But it’s precisely because this pseudonymous letter so handily encapsulates common tropes against the place of religious skepticism in American life that I feel it’s worth addressing each of its points directly.  Each one will come up again and again; in fact I’ll probably see each of them genuinely expressed by people I know at least once or twice before another 24 hours pass.

Here is a summary of the erroneous assertions this editorial mimics:

1. Atheists are un-American and need to leave the country.

2. The First Amendment only protects the religious.

I can’t tell you how often I hear these assertions made by people around me.  I live in Mississippi, and these sentiments resonate with a substantial portion of the population in my region of the country. Presidential candidates will even say stuff like this to cater to this crowd, and it works every time.  But all three assertions are demonstrably false, and I figure once in a while it behooves us to spell that out in print. So here goes.

Three Concepts Which Too Many American Christians Have Never Grasped

1) It is fundamentally un-American to discriminate against an entire class of people based on a religious difference.  Religious freedom plays a central role in a democratic society, and the only way to ensure that you are free to worship as you please is to ensure that everyone else can worship as they please (or by extension not to worship at all).  Religious pluralism is an essential component in a free society, and that means learning to put up with people who don’t belong to your religion.  You can disagree with them.  You can argue against the things they believe.  But they must remain welcome in your society because if they’re not then what’s to stop someone from ejecting you next?  If religion gets to be a required thing then who picks which one gets to rule them all?  Early in our country’s history we figured out that it doesn’t turn out well to establish one religion over the others in the public square.  Doing so never turns out well in the end.  Keeping church and state separate benefits both entities.

2) The First Amendment protection extends to the non-religious as well as the religious.  Just as it states the government cannot prohibit you from freely exercising your religion, so it also states that the same government cannot favor one over the others.  And if the Establishment Clause, as it’s come to be known, is to be applied consistently, then we must see that favoring religiousness over non-religiousness would equally constitute religious discrimination. It would signal favoring religion over non-religion, and that may serve one group but it does not treat all equally, which is the goal.  If you’re always taking government protections and applying them to yourself but not to people who are different from you, you’re not getting how this works. It’s incredibly egocentric and it makes you look foolish when you do that. 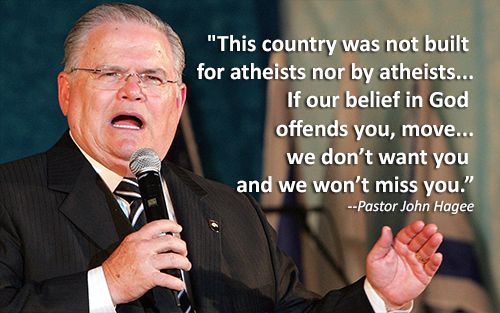 3) There simply isn’t any demonstrable connection between crime and the presence or absence of school prayer.  First of all, you cannot possibly ban school prayer.  Prayer happens whenever you like and no one is limiting that.  The only thing being limited is forcing everyone to listen to your particular religion’s prayers being spoken aloud for everyone to hear (something which Jesus explicitly discourages doing because it’s for show).  In order to be consistent, this would mean allowing the prayers and proclamations of all the other religions present getting their chance to do the same.  Are you prepared to let a Muslim crier sing the morning worship call in your town or at your child’s school?  Are you ready to have your child sit and listen to the principles of Satanism (and yes, that’s a thing) read aloud over the intercom?  Some cherished sayings of the Buddha, perhaps? Is that really what you want?

Second of all, if you really want to insist on establishing a connection between the crime rate of an area and its religiousness, I don’t think you’re going to like what you find out.  Those states which consistently score the highest on religious devotion also suffer the highest crime rates in the country.  If prayer stopped crime then that wouldn’t be the case.  But people around me have somehow gotten drilled into their heads that there is a direct correlation to school shootings and “taking God out of school.”  My response to that is:  If your God can be “taken out” of a place, he’s not very powerful.  Maybe you should find a bigger God.  Besides, shootings happen in churches, too.  Were they praying incorrectly?  Did God disapprove of their particular preacher and therefore remove his protection from them?  It seems to me you have to eventually decide that this facile connection between public prayer and crime isn’t what you think it is.  It’s mentally lazy and it lacks any statistical verification or causal connection whatsoever.

I realize most of my readers already know all of this stuff.  But sometimes it’s helpful to put it down in print just to get it said for the benefit of those who still haven’t thought these things through.  This is basic stuff—Civics and Government 101.  Our educational system has evidently failed to instill the general population with an adequate understanding of these basic principles, so it behooves us to spell them out as often as it requires to get these things said.  Maybe for our next lesson we’ll talk about how the president doesn’t really have any significant control over the price of gasoline…

January 28, 2015 Yes, We Talk About Being Ex-Christians. And That's Okay.
Recent Comments
0 | Leave a Comment
Browse Our Archives
Follow Us! 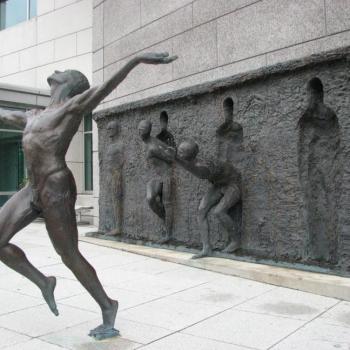