Why “It’s Better to Give Than to Receive” Is Really About Preachers February 24, 2015 Neil Carter 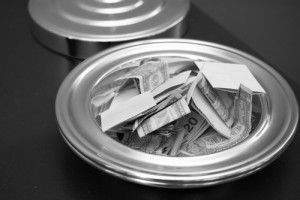 Have you ever heard a preacher say “It’s better to give than to receive” during a tithing sermon? Did you know that the verse he was quoting was actually calling for the exact opposite of what he was doing?

The Apostle Paul credited Jesus with this saying even though it appears nowhere else in the Bible—it never shows up in the gospels. What’s even more curious is that Paul almost never quotes Jesus. This is one of only two places where he does that (the other is in his retelling of the Last Supper, where he repeats a couple of Jesus’ lines from during the meal). Paul references things from the gospels so sparsely that many have argued he may not have been too familiar with them, or else he wasn’t particularly concerned with what was in them, which would be noteworthy in itself. I think it’s safe to say most preachers are equally unfamiliar with the context of this famous saying, and what it meant when Paul said it.

His Audience Was Preachers, Not Their Congregants

When Paul uttered those famous words “It’s better to give than to receive,” he was telling a group of preachers that they should follow his example by providing for their own livelihoods instead of depending financially on their congregations. Listen to what he advised this group of church leaders:

“I have not coveted anyone’s silver or gold or clothing. You yourselves know that these hands of mine have supplied my own needs and the needs of my companions. In everything I did, I showed you that by this kind of hard work we must help the weak, remembering the words the Lord Jesus himself said: ‘It is more blessed to give than to receive.’ ”

See, it had already become customary for some church leaders to solicit money for themselves from their churches, and Paul despised this practice (“I would rather die,” he once asserted). Some have suggested that this must have reminded him far too much of the sophists who mooched off of the wealthy class. Whatever the reason, he felt so strongly about this that during his last trip toward Jerusalem he summoned the leaders of the church in Ephesus and made his final words to them about this issue. “Work for a living,” he essentially told them. “Don’t mooch off your congregations.” Because it’s better to give than to receive.

Now fast-forward to today, in which preachers mount the pulpit at least one season per year (usually around budget time) in order to remind the faithful of their obligation to give to the church budget. Yet another layer of irony comes from the fact that the tithe is not even a New Testament concept. Like the dietary laws or the ceremonial washings and furniture of the Tabernacle and Temple, the tithe was an institution which fit a certain time and place and should have disappeared with the advent of the “new covenant.” In the Old Testament, people gave a tenth of their grain and meat and other measures of wealth in order that the priestly class might have a living. But with the birth of the church and the new covenant, that special priestly class was supposed to fade away, but it didn’t. Somehow the idea of a special class of holy men (not so much women) survived and carried over into the church, and along with it came a continuation of the practice of tithing in order to fund their living.

It would be many years before specialized buildings and furniture and other such expenses would become a part of the Christian faith (most would argue that was a product of the conversion of Emperor Constantine), and in time those things would come to consume the majority of the expenditures of most churches. Today, the largest portion of the budgets of most houses of worship goes to paying for the salaries of the staff members and the expenses related to the ownership and upkeep of the church facilities. Very little of what a church takes in actually goes to help the demographic most frequently mentioned in Jesus’ teachings: the poor.  According to a study done by the Evangelical Christian Credit Union, the typical evangelical church only gives about 1 percent of its budget for local and national benevolence projects (Note: Those original survey results can only be found via archive.org here because the ECCU has since pulled that link).

In fact, the place in the New Testament which is most often used to justify the survival of the tithe was in reality a reference to a special collection for those experiencing a famine in Judea. It wasn’t a collection to pay the salaries of local church leaders; it was a unique situation in which Paul was encouraging the Gentile Christians outside of Judea to contribute to the material needs of the Jewish Christians in that region as a sign of solidarity with them. He advised them to be orderly about their fund-raising so that he wouldn’t have to talk about money when he came to visit them later on. It had nothing to do with a tithe or with paying the salaries of ministers.

So to sum up, there was no tithe in the New Testament, and the apostle Paul quite adamantly encouraged preachers to get real jobs so that they wouldn’t be financially dependent on their congregations. That was what he meant when he told the elders from Ephesus that “It’s better to give than to receive.” So the next time a preacher tosses out that line from the pulpit, feel free to explain to him what he’s saying.

February 25, 2015 Here Is Why That Miracle Claim Does Not Impress Me.
Recent Comments
0 | Leave a Comment
"Probably current times."
skl What Makes People Long For the ..."
"I know. It's ridiculous. Even "he'll" triggers it!!!"
Joe Omundson Biblical Contradictions and Confusion: How Are ..."
"Prove that a soul exists without resorting to the Bible. And especially prove without resorting ..."
Traveller Biblical Contradictions and Confusion: How Are ..."
"Our immortal souls have supenatural power of "free will" free to believe anything for any ..."
Arka777 Biblical Contradictions and Confusion: How Are ..."
Browse Our Archives
get the latest from
Ex-Communications
Sign up for our newsletter
POPULAR AT PATHEOS Nonreligious
1