Phil Robertson: Let’s Use Cousin Phil to Our Advantage

“We can’t win an argument with Phil Robertson

because there’s no curing stupid.”

About Duck Dynasty’s Phil Robertson, who said such awful things (again)–can I say something?

From a tactical point of view, this guy is a gift to the atheists. Instead of engaging with him angrily, we would do well to stand back and let him continue to spill his vitriol. We don’t want to fight him. We want to put him on display and show him to the rest of the religious world, then pose the question—“Do you really want to be on this guy’s side?” BTW, Cassidy McGillicuddy shines the spotlight on him quite admirably here.

Don’t talk directly to Phil. He’s never going to understand that he’s crazy. Instead talk to the sizable number of Christians who are embarrassed to be associated with him. Make them answer up for allowing a guy like him to be their spokesman. Better yet, allow some Christians to bash him for us. I used to pray to have a nemesis in church like Phil–some loud, outrageous, duck calling character who didn’t like me. I’d let him speak all he wanted beca 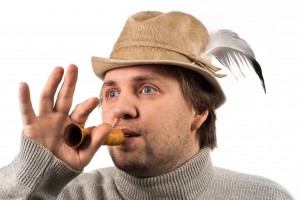 use it embarrassed my other enemies into silence. and then I looked like Pastor Nice Guy to the rest of the community–the voice of reason in the face of holy ignorance.

We’ve been talking lately about the Nones– the group of people who are already on the fence about religion. Want to nudge them a little further away from the church? Let’s show them this guy, shake our heads in bewilderment and ask, “Why would anyone want to be like him?”

Here’s the problem with fighting Phil: The more we respond with anger, outrage, and curses, the more confused our audience gets. They don’t hear the argument; they only see the emotional violence on both sides of the debate. People who are wounded, even traumatized, by religion will not be able to tell us from the guy who looks like Andy Griffith’s mutant cousin.

We can’t win an argument with Phil Robertson because there’s no curing stupid. But by using a softer voice than his, we can help people find healing from the trauma they’ve sustained from religion, which is one of our goals.

March 29, 2015
Three Years Ago I Left the Pulpit and Came Out Publicly as an Atheist
Next Post