When Your Child Is Terrified You’re Going to Hell

When Your Child Is Terrified You’re Going to Hell April 8, 2015 Neil Carter 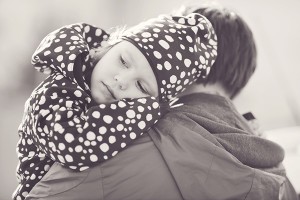 Two nights ago as I was working through the nighttime routines with my daughters I noticed that my youngest, who is seven, was clingier than usual. She’s been that way a lot lately because she still can’t understand why her mom and dad decided they can’t live together anymore. There isn’t any way for that not to be hard, but this particular night she seemed more upset than usual. She was whimpering at my side, so I squatted down beside her and asked her what was wrong.

She started crying big tears and said, “I can’t tell you; I promised [big sister] that I wouldn’t tell.”

Oh, hell no.  I don’t even have to ask, but I have a strong suspicion that I know exactly what this is about. The youngest just got baptized a couple of weeks ago and ever since then her church and her extended family have been showering her with talk of heaven and salvation and isn’t it great that we’ll all get to be together with our loved ones forever after we die?

Except not your father. He doesn’t believe any of this anymore. Your poor father chose to reject Jesus and now he’s not going to be with us in heaven. Isn’t that so very sad?  We should start praying for him now, and pray with all our might.

I pulled my third daughter aside and we had a long talk. Through her own big tears she explained that she didn’t mean to upset her little sister, but she had honestly told her that she was worried for my soul. I already knew it was on her mind because earlier that evening she told me in her most somber voice, “Daddy, I want you to know…I’m praying for you.” Yes dear, I know, thank you.  We’ve already had multiple conversations about this (I wrote about one of them here) but now it’s spreading to the youngest. For her, all of this is still new. It’s still a fresh wound.

What do you tell your children when they tell you they fear for your soul?

This is hard, folks, in case you didn’t know. There isn’t an easy solution.

People with no clue how delicate these matters are will chime in and assure me that I should just lay it all on them at once.  Just go full atheist on them.  They suggest I should just look at my children, who have no other people in their lives who think this way, and tell them flat out that it’s all bullsh*t.

Are you out of your mind?  Forgive me, but you have no idea what my world is like.  I know there’s a lot of debate between firebrands and diplomats and I can’t speak with authority about everywhere else, but I can speak with relative certainty about my own little corner of the world.  You won’t get anywhere burning your bridges like that.  And there is no way in hell I’m going to look into my little children’s eyes and ask them to ingest whole the idea that every single adult in their lives save for one is completely wrong about this vast network of ideas about which they are all gravely concerned. I am not interested in making my own children afraid of me, thank you very much.

In situations like this, if you do not speak the language of the ones you love, you will lose them.  You will lose their trust, and you will frighten them. They’re already frightened, in fact. At this particular moment they’re both in tears.  What they need most are words of comfort. They need words that will allay their fears without demanding that they try to put their own heads on backwards, attempting to suddenly see the world completely differently from how they were taught to see it.

So what did I tell them?  How did I respond?

I appealed to things they already believe, and I asked them to consider the implications of those things in a new light.

First, I reminded them that people can be wrong.  While I understand the importance of children needing to know they can trust the people who care for them, clearly we can make mistakes and we can be wrong about some things. They already think their father is wrong about God. So it’s not that much of a stretch to consider that others could be wrong about some of the salient details pertaining to heaven, hell, an afterlife, etc.  They have been taught that you must believe in God to go to heaven.  But what if they’re wrong?  What if they’ve misinterpreted how all of that works?  Certainly that’s a possibility that should be considered.

Second, I asked them to consider how good fathers treat their children, and to consider how that should affect their concept of God.  I think I am a pretty decent father to them.  They love me very much and they know that I would never hesitate to give them what they need. They know that I would do anything and everything in my power to prevent anything from harming them.  Nothing could keep me from caring for them or protecting them no matter what they chose to do with their lives, and they know it. Have they not been taught that God is an even better father than I am?

Never mind that I don’t believe I’m talking about a real person. They believe he’s real, so I’m working with what I’ve got, here.  They are seven and eleven years old. Some digs require a brush, not a shovel.

I asked my youngest, “Do you think there is anything you could do that would make me stop protecting you, even if you were the one trying to hurt yourself?”

“Do you suppose that I’m a better father than God is?”

She shook her head, then she smiled for the first time.

“Well then, what are you worried about?  Do you suppose that God cares more for you than he cares for me?”

“Then do you really think that he will let something like that happen to me, even if I tried to bring it on myself?”

She hesitated, then shook her head again.

“Even if you don’t feel you can trust me because I can be wrong, maybe you can decide to trust that God isn’t going to punish me just for not believing the same things as everybody else, because that doesn’t sound like a very good father to me.”

She dried her eyes and started to relax. I could see it pass over her little body.

We hugged and she clearly appeared to feel better.  I went into the other room and duplicated the same conversation with the eleven-year-old, who agreed to do her best to remain open about finding the right way to approach these contentious things. It’s going to take a lot of work, and clearly I am the only person in their lives who thinks this way, so most of the burden seems to be on me.  But it was a good conversation, and they soon were relaxed enough to fall asleep.

I’m sure there will be no shortage of people who think what I just did there was the wrong thing to do.  Why lead my own children on, accommodating a belief system I don’t think matches reality at all?  Am I not reinforcing for them the very things that I rejected myself, at great cost I might add?  Maybe I am.  I dunno.

What I do know is that minds don’t change instantly, and young children learn better when their education isn’t traumatizing.  They’ve already been frightened enough by well-meaning preachers and teachers who have taught them that they will be separated from me for eternity, all because I changed my mind about this one thing.  I’m not interested in further scaring them because their dad is trying to change them to become as damned as he is.

I’ll be honest with them if they want to know what I think about these things.  But I won’t require that they agree with me.  I only ask that they consider that people can be wrong, which is the first step to learning the value of critical thinking skills.

And of course, most of all, I’m just going to keep on being their dad.  I’m going to keep doing what I do, because in the end those relationships are what matters most to me.  I care not that my girls see their world the same way I do, I just want to make sure I remain in it for as long as I can.

The book they are being taught to trust says that compared to faith and hope, the greatest thing is love. The way I see it, if I can give them that, I’m doing alright in their book.

For more on the same topic, see also:

April 8, 2015 The Coin We Recognize.
Recent Comments
0 | Leave a Comment
Browse Our Archives
get the latest from
Nonreligious
Sign up for our newsletter
POPULAR AT PATHEOS Nonreligious
1

Nonreligious
How the Secular Therapy Project Helped Change My...
Ex-Communications 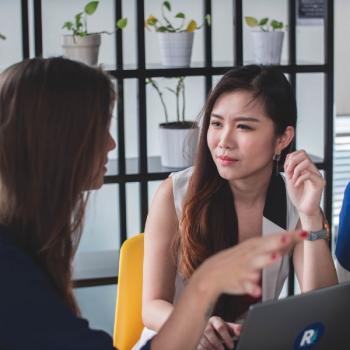