The Balancing Act of Compromise and Integrity

The Balancing Act of Compromise and Integrity August 31, 2015 Galen Broaddus

My colleagues Hemant Mehta and Matthew Facciani have started some interesting discussion, if even just in a small part, on the question of what an atheist (and I would add anyone who isn’t religiously observant) should do when asked to pray. This is an intriguing question to me because I think it is a useful foil for thinking about how we interact with religious people more generally and how our beliefs and stances should inform our interactions.

I don’t believe in god

now she’s gone forever, and I feel like I failed her as a daughter

It’s hard not to empathize even just a little bit, especially if you’re one of those people whose parents did not respond well when you told them that you don’t believe. (My own father once said that he considered my rejection of Christianity a “disappointment,” and I can’t help but take that at least a little personally.) When people have expectations and you don’t meet them – even when those expectations are not necessarily fair or realistic – that can lead to this kind of regret, which is unfortunate.

About this particular situation, Hemant said,

If the situation isn’t about me, I’m willing to push my atheism aside for a bit. It’s not like I’d “win” anything for standing firm.

I definitely would and I don’t see any argument as to why atheists should not do so in such a situation.

While I mildly agree with each statement, there are points in each that I think deserve further scrutiny.

Sometimes It’s About You When They Make It About You

For formerly religious people, there is often emotional baggage that comes with the departure. Granted, some people leave and then have no problem feeling comfortable (even if aware of the disparity between their beliefs and the messages involved) with religious practice, but this isn’t true for everyone. For some, these once-accepted practices have a very real and even sometimes physical effect on them, and so it cannot be accepted at something perfectly innocuous.

And of course, those religious people may or may not be aware of these things. My grandmother is in her ’90s, and while she knows that I’m not religious or a theist anymore, she likely doesn’t know exactly how I feel about religion since I left it a few years back. If she requested that I sing a religious song at her funeral (which hopefully won’t come anytime soon), she wouldn’t know about my apprehensions with religious songs. As such, I would have a hard time faulting her for that, and I might be moved to bite the bullet and comply for her sake. (More on why in a second.)

But if someone closer to me (like either of my parents) was aware of my feelings and wanted me to engage in some practice despite that? That isn’t simply a matter of what they want. It’s a matter of them respecting my own feelings on the matter. At the point where they are putting me in a situation where I have such a dilemma, they have made it, at least in part, about me, too.

That’s not to say that I don’t believe in compromise. I absolutely do – it’s hard to see how my own mixed-belief marriage would have survived to this point without it. But it’s also true that within that context, which is only one of many possible situations that require more careful consideration and deliberate action, compromise isn’t always the solution.

I don’t think there are any easy answers to this, but here are some questions that I think can guide one’s decision-making process when these situations come up:

These are somewhat variable and even subjective criteria, but they can still be useful. Consider these hypothetical situations:

Harold’s mother wants him to attend church with their family. She knows that Harold is no longer a believer, but she believes that she will be personally responsible for her son’s eternal fate if she doesn’t try to keep him in the fold. Harold doesn’t really care much about church in general; he simply had too many unanswered questions and got tired of getting up on Sunday mornings.

Mary’s husband wants her to attend services at a conservative Baptist church with their family. He knows that Mary has an almost visceral reaction to the hellfire-and-brimstone style of preaching, although he tries to assure her that this church won’t be like that.

I don’t think it takes much to conclude based on just these short descriptions that Harold’s mother is not making an onerous request and Mary’s husband is. Harold would lose very little personal comfort or integrity, and he would possibly alleviate some real pain of his mother’s by doing so. Conversely, Mary would likely suffer real harm in being exposed to a religious practice that she has strong negative emotions about, which very well might override the possible benefits to her husband by her participation.

When it comes to a sense of personal integrity, though, that can be something entirely different. For instance, if I was asked to pray at the deathbed of someone I loved (assuming that the person wanted an explicitly audible prayer and not merely a silent one), I would have a hard time with that request. Speaking to a being whose existence I deny or doubt is for me an assault against my own personal integrity: It is an act of lying to myself. For some people, this is a little lie and one easily exchanged, but for me, it is a deep insult to my own self-image and -esteem. I can no more help this than I can help my height; it is simply part of my personality and character.

Of course, I can’t discount the possibility that I might be willing to take a hit to my own sense of personal integrity if the odds were high. In that case, my compliance with such a request might be considered a supererogatory action: that is, one that is not obligatory but nonetheless morally good. As such, there are certainly reasons for an individual to decline such a request, even while it might be admirable for someone to override their own personal concerns and apprehensions for the benefit of another person.

There Are Often Other Paths

One final thought: I’ve been working off the assumption that the only options are compliance or non-compliance. But it’s also true that some problems may actually have a different path available. In some cases, you might find that you can honor the spirit of the request while also protecting your own personal integrity.

Let’s return to the situation at the beginning: A loved one (we’ll stay with the mother here) has summoned you to their deathbed in order to pray with them. You know that praying has a comforting effect on her, and she is in a situation where she needs that comfort. She’s asked you specifically because you hold a special place to her, so it’s not just a generic need but one that requires you in particular. But you feel as I described above: Praying to a god you don’t believe in would be acting out a lie, and it’s not a lie you’re comfortable with.

So you say, “Mom, you know that I don’t believe in God, and I wouldn’t feel right disrespecting your devotion by pretending, but I’ll hold your hand here while you or someone else prays.” And maybe that would be sufficient, and maybe it wouldn’t (YMMV*), but it would be a way to seek compromise without compromising your beliefs or integrity.

Someone asks you to say grace over a meal? Give a secular blessing, thanking those who provided and toiled over the food.

Someone asks you to sing a religious song for an important function like a wedding or funeral? Do what choral performers often do and treat the song as one from a different culture which you are singing dispassionately, without a sense of conviction for the meaning of the lyrics.

I’m sure there are even other ways to find a middle ground in many (although probably not all) situations. While sometimes you might have reason to deny these requests outright, such as if you suspect intentional manipulation, it may be worth your time to pursue these paths.

Have you ever been put in such a situation? I welcome your stories and input in the comments below.

Update (9/1): My friend and colleague Kaveh at On the Margin of Error has a response also worth reading.

*Your Mom May Vary.

August 29, 2015
The Happy Christian Marriage, Change, and the Core of Our Being.
Next Post 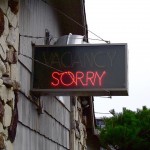