That time Pentecostals turned me into an atheist.

That time Pentecostals turned me into an atheist. September 9, 2015 Galen Broaddus

This guest post is by Dylan Walker, who blogs at SkeptimusPrime.net.

The journey from a staunch fundamentalist Christian who believed in young earth creationism to an atheist was one that took me a number of years, but there were a number of specific experiences along that path which caused me to ask hard questions about my beliefs and slowly begin to shift my perspective on things.

One of the first, if not the very first, of such events happened in the summer of 2000. I had just finished my third year of college, and after spending my first two summers at a stateside missionary training program called Kaleo, I was reading for something more challenging. The campus ministry I was involved in there had several overseas mission trips, but they had no more spots open on those trips. So someone I knew from the campus ministry recommended a group he had heard good things about, which had some openings.

I filled out an application and raised some money, and several weeks after college ended, I found myself on a plane to Calcutta, India, where I would stay for two months. There were a number of things I had to adjust to, washing my clothes in a bucket being one of the more memorable of them, but what led to my epiphany was something less mundane. The Christian traditions I was steeped in were a traditional fundamentalist one, Baptist, Methodist, and a few non-denominational churches, but the majority of the people in the group I ended up in were from a charismatic background.

For those unfamiliar with the differences between these groups, the traditional groups I was part of tended to follow a tradition that was at least superficially intellectual and tends to hold to the doctrine of cessationism (the belief that spiritual gifts have ceased). However, Charismatic Christian groups, like the Pentecostals, tend to a more emotional and expressive faith, and they reject cessationism, which means they believe in things like faith healing, laying on of hands, and glossolalia, otherwise known as speaking of tongues.

This led to some interesting situations during my two months in India, ones in which I, ironically since I was a fundamentalist, found myself defending the more reason-based position. For instance, one of our members got sick, and while I recommended bedrest and medicine, the others wanted to anoint him with oil and pray to remove the demons Satan had placed on him to prevent him from doing his mission work. (We had a rather vaulted opinion of our work.) I also had a number of awkward moments in prayer groups when people started praying in tongues, but if this had been the extent of it, I probably wouldn’t have been so shaken up by this trip.

The real watershed moment came in the second month of the trip. We took a week-long break in the middle of the trip to visit Darjeeling, and when we came back, we moved to a new place. Another missionary group was also staying there; they were also very Charismatic, and on one of our break days, I had a lengthy conversation with them. My experiences with my fellow charismatic missionaries had made me curious about their brand of Christianity in a way I had never been before, and part of me really wanted to experience things the way they did. Of course I had had spiritual experiences while I was a Christian, but theirs seemed more engaging or real somehow.

They told me it was actually pretty easy for someone to get the “gifts of the spirit” if they really wanted them, and at a certain point in the conversation, they convinced me that they could pray over me and give them to me. So a group of five or six people I barely knew gathered around me, laid hands on me, and started praying for me to receive the gift of glossolalia, and they prayed, and they prayed some more. I felt…nothing, absolutely nothing, other than their hands about my head and shoulders of course, but they started insisting that they could see that I had the gift now and I could start speaking in tongues when I was ready.

This whole thing probably took three to four minutes, which might not seem like long, but at the time seemed like an eternity, and all the while I still didn’t feel like anything had changed. Finally, the mix of peer pressure and embarrassment caused me to try to fake my “heavenly tongue,” mostly believing that these spirit-filled Christians would out my fakery right away. I was almost certain that the Holy Spirit would tell them that I was faking but thought it would at least bring an end to this awkward experience and I could retreat to my room and avoid them for the next week or two before we left.

So I found myself rather surprised when my new charismatic friends fell for my charade completely. None of them voiced even the slightest notion that I might be faking things, but there was no doubt in my mind that I was doing just that. I went back to my room after the experience feeling a bit drained. I remember having a conversation about the experience with one of the few missionaries from my group who was not a charismatic; he was a Calvinist who I’d had a few lively theological debates with since I leaned towards the Arminian side of that debate, but I hedged my feelings on the experience even then, not wanting to admit to myself what a letdown the experience was.

In the days and weeks following this experience, particularly after I was back in the U.S. and had time to process my experiences on the trip, I went back over those events a number of times, and there was one thing that really started to bug me. If those missionaries could be so convinced that their experience with their charismatic version of Christianity was real, while my personal experience indisputably told me that it was not, then how could I be sure of my own religious experiences?

As a religious studies major, I had known for some time that there were some chinks in the intellectual arguments for Christianity generally and even more so for fundamentalism specifically, but I felt I could safely ignore those because I had an experience with the risen Christ. I trusted that answers to my intellectual questions did exist because I already knew Christianity was true thanks to that experience, but now that I suddenly found myself doubting the reliability of said experiences, those questions didn’t seem so easy to put off.

I decided I needed more than just an experience, and the promise of answers on some far off day. For the next several years of college, and beyond, I began dig more into my beliefs to see if they held up to scrutiny. Understand, at the time I had no intention of leaving Christianity entirely, but I did start questioning some of the beliefs I already had doubts about. As I remember, biblical inerrancy was the first doctrine I rejected, but I’ll leave things there for now.

This piece originally appeared here and has been gently edited. 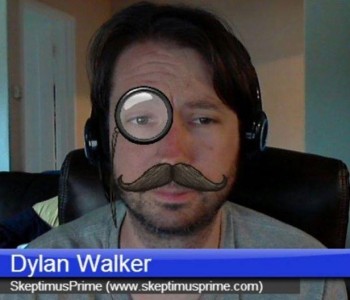 Dylan Walker graduated from Hendrix College in 2002 with a degree in religious studies with plans of joining the ministry, only to realize over the period of a year or so that he no longer believed in the Christian religion he had studied. He and his wife were married in March 2014, and they have now a one-year-old daughter. He has been blogging since 2011 and currently writes at SkeptimusPrime.net.

September 11, 2015 Plato's Cave and the Modern Science [Video]
Recent Comments
0 | Leave a Comment
Browse Our Archives
get the latest from
Ex-Communications
Sign up for our newsletter
POPULAR AT PATHEOS Nonreligious
1

'Joseph Masturbated In The Corner, Too'...
Laughing in Disbelief
Related posts from Ex-Communications

God Is Not to Blame for This
A younger friend recently told me she knows a number of guy...
view all Nonreligious blogs
What Are Your Thoughts?leave a comment
Copyright 2008-2020, Patheos. All rights reserved.