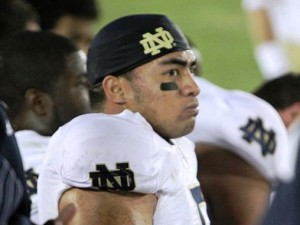 Notre Dame football star Manti Te’o claims to have been the victim of an elaborate hoax by a female who claimed to be dying from leukemia. News of her alleged death fueled the stories about him playing through tremendous heartache this season that helped elevate him into the national spotlight.

Kekua, 22 years old, had been in a serious car accident in California, and then had been diagnosed with leukemia. SI‘s Pete Thamel described how Te’o would phone her in her hospital room and stay on the line with her as he slept through the night. “Her relatives told him that at her lowest points, as she fought to emerge from a coma, her breathing rate would increase at the sound of his voice,” Thamel wrote.

Upon receiving the news of the two deaths, Te’o went out and led the Fighting Irish to a 20-3 upset of Michigan State, racking up 12 tackles. It was heartbreaking and inspirational. Te’o would appear on ESPN’s College GameDay to talk about the letters Kekua had written him during her illness. He would send a heartfelt letter to the parents of a sick child, discussing his experience with disease and grief. The South Bend Tribune wrote an article describing the young couple’s fairytale meeting—she, a Stanford student; he, a Notre Dame star—after a football game outside Palo Alto.

Did you enjoy the uplifiting story, the tale of a man who responded to adversity by becoming one of the top players of the game? If so, stop reading.

As bizzarre as it sounds, I find his story pretty believable. I’ve dealt with situations with teens who have become quite intimate with people they met on-line and communicated with only via text — who then turned out to be posers. Unfortunately, such predatory behavior is far more common than most parents know. Now mix in a big-hearted football player whose life is utter chaos on the hectic road to a national championship and all the publicity that comes with it — and I think it could happen. The question of whether or not it did remains to be seen. Some claim Te’o was in on the hoax to create some sympathy and grow his celebrity status. Oh, and his view of faith as an irrational leap disconnected from any objective truth may have contributed to the deception.

Faith comes by hearing and hearing by the Word of God. 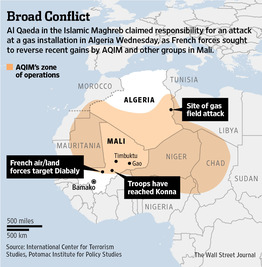 About 40 foreigners including several American citizens have been taken hostage in Algeria in Northern Africa. A militant group closely tied to al-Qaeda claims responsibility and retaliation for the French action in Northern Mali.

France’s top target, al Qaeda in the Islamic Maghreb, or AQIM, claimed responsibility for the Algeria kidnappings, calling it retaliation. The claim couldn’t be verified, although AQIM has its origins in Algeria and operates across a swath of Africa.

Defense Secretary Leon Panetta said the U.S. would take “necessary and proper steps” in the hostage situation, and didn’t rule out military action. He said the Algeria attack could represent a spillover from Mali.

Here’s the stark reality, al-Qeada never was about one man. Killing bin Laden wouldn’t stop an ideology that existed long before he came around. Read The Looming Tower: Al-Qaeda and the Road to 9/11

by Lawrence Wright to get the history of the group and understand why they and similar networks are not going away anytime soon. In fact, they seem to be expanding in places like Northern Africa. This event will prove a significant test for President Obama. It used to be that we would never permit such a thing to stand. After what happened in Benghazi, I’m not so sure. 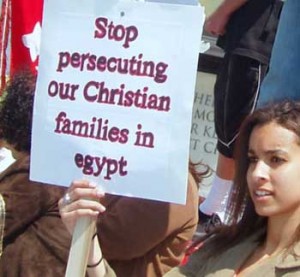 Under the new and oppressive Egyptian Constituion based on Islamic sharia law, a Christian mother and her seven children were sentenced to fifteen years in prison for converting to Christianity.

Samuel Tadros, a research fellow at Hudson Institute’s Center for Religious Freedom, said conversions like Nadia’s have been common in the past, but said Egypt’s new Sharia-based constitution “is a real disaster in terms of religion freedom.”

“Now that Sharia law has become an integral part of Egypt’s new constitution, Christians in that country are at greater risk than ever.”- Jordan Sekulow, executive director of the American Center for Law and Justice

“The cases will increase in the future,” Tadros said. “It will be much harder for people to return to Christianity.”

No surprises here. Under the new regime, we knew to expect such persecution of Christians. This case seems a little shady because the conversion seems to have been more a ruse to get an inheritance than one of genuine faith in Christ. So perhaps there is more to the story than we know at this point. But Islam is a religion primarily concerned with external appearances so such things matter greatly. Just remember that the US supported the rising of the Muslim Brotherhood and friends in Egypt that led to this nonsense. And then we re-elected the one responsible for that position.

What? Not everyone worships at the Western altar of Tolerance?

All of us supporters of gun rights would do well to remember that “A gun is a vain hope for safety.” (Ps. 33:17)

January 16, 2013
Will the Hobbit Inspire Your Own Unexpected Journey?
Next Post

January 17, 2013 Remember to Stop Being Afraid with Humility
Browse Our Archives
get the latest from
Evangelical
Sign up for our newsletter
POPULAR AT PATHEOS Evangelical
1

Should Christians Fight the Culture or...
Cranach
Related posts from FaithWalkers