In the latest issue of the Weekly Standard, I review a new biography of St. Nicholas and find that the culture, in Santa-izing him, has truly sanitized him. Whereas Santa is a secular icon, the real St. Nick was “against all forms ofpaganism, schism, and heresy”:

Granted, Nicholas is never seen resorting to violence against persons. Unlike the legend of his slapping the heretic Arius at the Council of Nicaea, English shows that on the only occasion when history records Nicholas encountering a heretic (a Marcionite prelate named Theognis), he won over his opponent through “a string of letters .  .  . patiently persuading him of what was right.” We are likewise told that the saint’s campaign against paganism was free of bloodshed: Rather than taking up “visible weapons,” he “armed himself with hope and firm confidence.”

Even so, Nicholas was no model of relativistic tolerance. As English observes, the record shows he “not only spoke against the gods and goddesses, he also destroyed their temples and sacred groves with his own hands.” Not for nothing do medieval frescoes depict him “red in the face with holy anger, toppling temple columns with his bare hands and then swinging an axe into the base of a sacred cypress.” The real-life Santa may indeed have had rosy cheeks; but with him around, no tannenbaum was safe. [Read the full review.]

Image: St. Nicholas destroys the Temple of Artemis, from the Church of S. Nicolo, the Lido of Venice, Italy, via the online gallery of the St. Nicholas Center.

November 29, 2012 The saints "rose above their violations through a deep conviction of divine love in their hearts"
Recent Comments
1 Comment | Leave a Comment
Browse Our Archives
Related posts from Feast of Eden 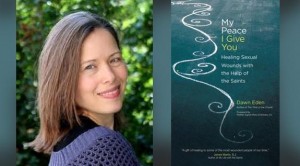 Catholic
"Learning that Catholics themselves were grieving over abuse...helped...
Feast of Eden

Catholic
Happy feast of The Saint Formerly Known as...
Feast of Eden
TRENDING AT PATHEOS Catholic