John Stott: Radical Disciple for the Care of God’s Creation

On a fine summer morning last July, the mail carrier brought me my copy of John Stott’s valedictory work, “The Radical Disciple: Some Neglected Aspects of our Calling.” Within hours, I heard the news that Stott had died at age 90.

We knew, followed and cherished John Stott for many reasons. Londoners knew him as the beloved rector of All Souls Church. Around the world, he taught Christians and seekers with his writings: more than 50 books in many languages, including Basic Christianity, The Cross of Christ and The Living Church. He was the chief architect of The Lausanne Covenant, a document which has come to define evangelical theology and practice throughout the modern world.

And his voice was heard far beyond the Christian church. In 2004, the New York Times wrote: “If evangelicals could elect a pope, Stott is the person they would likely choose.” The following year, Time Magazine ranked Stott among the 100 most influential people in the world.

But in the last years of his life, Stott grew concerned about “selective discipleship” among his contemporaries ” “choosing those areas in which commitment suits us and staying away from those areas in which it will be costly” is how he described it. “But because Jesus is Lord, we have no right to pick and choose the areas in which we will submit to his authority.”

And so at age 88, he penned his final work, by hand, focusing on eight areas that Christians often neglect as a way of avoiding costly ” or radical ” discipleship. They range from “Christlikeness” to “Simplicity” and even to “Death.” But they include one which gets almost no air time in contemporary American evangelical dialogue:

For Stott, care for the creation has nothing to do with deification of nature. On the other hand, it entirely rejects exploitation of the earth. Rather, it focuses on cooperation with God in conserving and nurturing the creation. “[God] has deliberately humbled himself to make a divine-human partnership necessary,” he wrote. “He planted a garden, but then put Adam in it ‘to work it and take care of it’ (Gen. 2:15).”

And what are the key areas today for disciples of Christ to cooperate with God in tending his creation? Stott lists three crucial trends:

1) Depletion of the earth’s resources, from wanton deforestation and habitat destruction to degradation of oceans and exploitation of fossil fuels

2) Excessive waste disposal, from thoughtless packaging and mindless consumerism, causing the average Briton to “throw out his or her body weight in rubbish every three months”; and

3) Climate change, the accumulation of greenhouse gases that threatens all the world’s ecosystems with “the specter of global warming, which may have disastrous consequences on the configuration of the world’s geography and weather patterns.”

This last item ” climate change ” deserves special attention in Stott’s call to discipleship. “Of all the global threats that face our planet, this is the most serious,” he writes. “One cannot help but see that our whole planet is in jeopardy. Crisis is not too dramatic a word to use.”

What should Christians do? Stott offers a short list: Support Christian environmental advocates and ministries; use sustainable forms of energy; switch off unneeded appliances; purchase necessities from companies with ethically-sound environmental policies; join local conservation societies; avoid over consumption; and recycle as much as possible.

But more important than any list of do’s-and-don’ts is Stott’s sense that creation care is essential to discipleship, however rare in the modern American religious landscape. He quotes his colleague Chris Wright in calling Christians to repentance:

“It seems quite inexplicable to me that there are some Christians who claim to love and worship God, to be disciples of Jesus, and yet have no concern for the earth that bears his stamp of ownership. They do not care about the abuse of the earth and indeed, by their wasteful and over-consumptive lifestyles, they contribute to it.”

Christians who want to follow Stott in “radical discipleship” will do well to remember who it is that owns this planet we call home: “To the Lord your God belong the heavens, the earth and everything in it” (Deuteronomy 10:14).

John Elwood is the author and publisher of The Clothesline Report that deals with the effects of environmental degradation and climate change.

Evangelical
Isn't Environmental Concern Based on Pantheistic Thinking?
The Earth is the Lord's

Evangelical
Isn’t “earthkeeping” just another expression for environmentalism?
The Earth is the Lord's 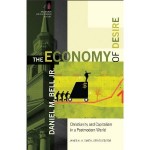 Evangelical
The Economy of Desire Christianity and Capitalism in...
The Earth is the Lord's

Evangelical
So What About the Book of Revelations?
The Earth is the Lord's
TRENDING AT PATHEOS Evangelical