Why Gardening is Fertile Ground for Mission

Why Gardening is Fertile Ground for Mission February 28, 2013 Alexei Laushkin

“The best place to find God is in a garden.  You can dig for Him there.” – George Bernard Shaw 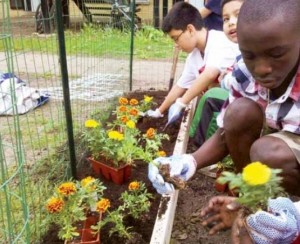 Over the past growing season, I have been managing a community garden in the ethnically diverse low-income apartment complex that I call home.  I live in this apartment complex as part of a group of friends from various local churches.  Together, we work with our neighbors to seek the welfare of our community.

Life is hard for our neighbors.  Most of them are either first generation immigrants or refugees from war-torn countries such as Somalia, Rwanda, Sudan, Iraq, and Burma.  Leaving behind everything and everyone they know, they move entire families into small one-bedroom apartments in an unknown country. They do this to stay alive, and with the hope that their children may one day have a future worth working for.

There are a total of one hundred and twenty apartment units in the complex, and the community garden provides us with an opportunity to grow healthy and sustainable food while developing love and respect for one another and the land.   This can be especially meaningful for many of our neighbors who come from agrarian backgrounds.

The planting season launched with lots of ideas, enthusiasm, and participation from all ages and cultures.  We ran soil nutrient tests with the help of a geology professor from nearby Wheaton College, and then found someone willing to donate a couple tons of sand to help improve the soil quality.  We also received generous contributions of tools and seedlings, and spent productive hours tilling the ground, building a fence, separating individual plots out, and laying down mulch.  The kids were especially involved and never seemed to run out of energy to help.  So we designated a kids plot and helped them plant a variety of veggies and flowers there.

I wish we could say that this is how well the rest of the summer went.  I wish we could report that the garden brought our community together in an unprecedented way—healing lives, restoring land, and producing basketfuls of vegetables for all to share.

To be honest, however, our reality has been unexpectedly challenging and my dominant sentiment towards the garden has often been one of frustration: frustration with those who signed up but never actually planted their plots; frustration with those who planted their plots but never watered or weeded them; frustration with the lack of sunlight the garden gets, which makes for some sorry looking tomato and pepper plants; frustration with the damage that strong storms over the summer have caused, especially when a gust of wind blew an upstairs window out of its frame and the glass shattered all over the kids plot; and frustration at the infamous “garden wars”, which broke out over petty disagreements about who got to water whose plot.  This particular conflict escalated to the point that an entire plot was destroyed in an act of retaliation, which led to the police being called out and a furious resident marching up and down the complex yelling down curses on her neighbors for three continuous hours.

Things became so exasperating that I started to question whether all the time, money and effort was really worth it.  After all, it would be far easier to simply walk across the street and buy the equivalent of our total harvest from the produce section at Jewel (a local grocery store).

But the more I think about it the more my frustration turns to wonder and gratitude.  With everything that went wrong this summer, the garden project should have failed.  Instead, while pushing through the discouragement—we even held an all-night prayer vigil in the garden after one particularly rough patch—we have begun to see modest but promising signs of healthy progress.  New friendships have begun to form, our piece of land is now in better shape in every way than when we started, many of the kids have come to love and protect their plots, and some families have harvested enough tomatoes, peppers, and cilantro from their plots in order to make some salsa.  The garden is not all that we hoped it would be.  But, against many odds, it has grown into something good.  And we will build on this year’s foundation in the seasons ahead, trusting that God will continue to accomplish his purposes through our weak but devoted efforts.  As Duane Litfin, President Emeritus at Wheaton College, once put it in a chapel message: “You have a plan.  God has a plan.  Yours doesn’t matter.”

Recently one of my young neighbors came to the door with a huge smile on her face and filthy hands from being in the garden.  “Look at what we grew,” she declared proudly, “it’s our very own cucumber!”  A simple cucumber may not be worth much in the eyes of the world, but in this case it was worth the world in the eyes of the little girl.

Our community garden efforts remind me that we are broken and sinful people living in a broken and sinful world.  It can be easy to look at the problems we face and despair.  But we press on by the power of the Holy Spirit because in Christ we have the victory over sin, and by grace we see hopeful signs that His kingdom is coming even now.

March 1, 2013 Young Evangelicals Speak Out On Climate Change
Recent Comments
0 | Leave a Comment
"The linked web address in this article is wrong. Two Rivers Native American Training Center ..."
Letha Stovall Healing the Land
"It won't take a huge 8 degree shift to cause serious harm to hundreds of ..."
Grotoff This Republican Agrees with President Obama ..."
"Cynically I'd observe that there are those who profit from the division. It wasn't that ..."
Bill This Republican Agrees with President Obama ..."
"My land isn't all the way healed from agricultural rape, but salvation is in progress.And ..."
Guest Genesis 9: The Forgotten Covenant
Browse Our Archives
get the latest from
Evangelical
Sign up for our newsletter
POPULAR AT PATHEOS Evangelical
1

Having Said That...There Are Times When...
Roger E. Olson
Related posts from The Earth is the Lord's