Does The Discovery of Earth 2.0 Mark The End of Religion?

Yesterday NASA made the announcement that they finally discovered something many have pondered: the existence of an Earth-like planet. The above illustration shows Kepler 452b, a planet somewhat larger than Earth but within the habitable zone of its star. Its year is almost identical to that of our own planet, and the amount of energy received from its sun is near identical as well– meaning if there’s life out there similar to our own, this is the kind of place where it’s happening. This discovery tells us two things: (a) Earth-like planets that host all the building blocks for life are probably relatively common in the universe, and (b) life may very well be relatively common in the universe also.

Discoveries like this are incredibly exciting, but are they bad news for God? Do they spell the end of religion? That’s precisely what scientist Jeff Schweitzer is arguing. In fact, he seems to think the discovery of extraterrestrial life would single-handedly strike down some of the world’s major religions if they were not re-written to accommodate such a discovery:

“I would like here to preempt what will certainly be a re-write of history on the part of the world’s major religions. I predict with great confidence that all will come out and say such a discovery is completely consistent with religious teachings. My goal here is to declare this as nonsense before it happens.”

How does Schweitzer prove that extraterrestrial life is inconsistent with religion? Well, he goes straight to the Hebrew book of Genesis:

“Let us be clear that the Bible is unambiguous about creation: the earth is the center of the universe, only humans were made in the image of god, and all life was created in six days. All life in all the heavens. In six days. So when we discover that life exists or existed elsewhere in our solar system or on a planet orbiting another star in the Milky Way, or in a planetary system in another galaxy, we will see a huge effort to square that circle with amazing twists of logic and contorted justifications. But do not buy the inevitable historical edits: life on another planet is completely incompatible with religious tradition. Any other conclusion is nothing but ex-post facto rationalization to preserve the myth…”

“Nothing in that mentions alien worlds, which of course the ancients knew nothing about. Man was told to rule over the fish on the earth, not on other planets. But god would have known of these alien worlds, so it is curious he did not instruct the authors to include the language.”

He goes onto argue that the omission of alien life would require anyone without a closed mind to basically wash their hands of the Bible:

“None of the 66 books of the bible [sic] make any reference to life other than that created by god here on earth in that six-day period. If we discover life elsewhere, one must admit that is an oversight. So much so in fact that such a discovery must to all but the most closed minds call into question the entire story of creation, and anything that follows from that story. How could a convincing story of life’s creation leave out life? Even if the story is meant to be allegorical, the omission of life elsewhere makes no sense.”

While Schweitzer begins the piece by saying alien life would be a problem for religion in general, his entire argument is based upon the creation account in Genesis, so what he’s really saying is it is a problem for the three religions who worship the God of Abraham and share that creation account (Christianity, Judaism, and Islam). But is he right?

No, he’s not. The discovery of alien life will not be the end of any of the three Abrahamic faiths, nor will it require all but the closed-minded to leave.

If I understand his arguments, it seems he’s arguing the following: if alien life exists but is not mentioned in the creation poem, such a creation account is either (a) factually wrong or (b) contains an omission which would prove it were not inspired by God.

The irony of the argument brings up an important point that I’ve seen not infrequently: some atheists and fundamentalists often insist on reading the Bible the same way, yet both sides think the other is stupid for doing so. And this is precisely what Schweitzer is doing: he’s taking a fundamentalist view of Genesis and arguing that it would all fall apart with the scientific discovery of extraterrestrial life. (In fact, he’s actually going one step beyond fundamentalism and arguing that if the creation account omits any information, it is wrong.)

Fundamentalist: This is what the text says. If it did not happen exactly the way it is recorded, it is not true. Therefore, it must be true.

Atheist: This is what the text says. If it did not happen exactly the way it is recorded, it is not true. Therefore, you’d have to be closed-minded to believe it.

It’s the same hermeneutical approach on both sides. It imports the same modern assumptions on how we tell history versus how ancients told stories, and assumes being “inspired by God” means the text must answer modern questions instead of ancient ones. Whether approaching it from the atheist side or that of the fundamentalist, it’s a rather unenlightening way to approach these ancient stories.

Our religion only falls apart if you hold Schweitzer’s assumptions: the creation account is a true account of creation and if something is omitted, the account is wrong. I don’t know many who actually hold to this position, so I would imagine the collapse of religion predicted would be relatively small.

In the end, I would be thrilled if they discover (as I already anticipate is true) that life is actually common in the universe. This will not shake my faith at all. This will not require me to become closed-minded an abandon the entire Christian narrative.

And as someone who loves asking questions about God, I welcome the opportunity. 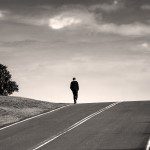 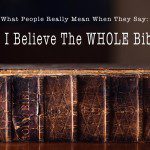 July 27, 2015 What People Really Mean When They Say "But I Believe The WHOLE Bible"
Recent Comments
272 Comments | Leave a Comment
Browse Our Archives
Follow Us! 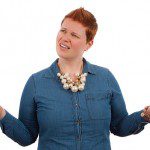 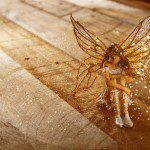 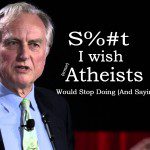