The Sins of the Child 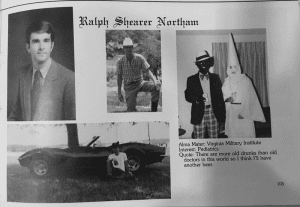 Virginia Governor Ralph Northam is facing calls to resign from both the right and the left after an offensive photo from his medical school year book surfaced Friday.  Presumably, he not only posed for the photo, but also selected the picture for inclusion in the yearbook, though he is now disputing that.

Gov. Northam has apologized, saying, “I am deeply sorry for the decision I made to appear as I did in this photo and for the hurt that decision caused then and now. This behavior is not in keeping with who I am today and the values I have fought for throughout my career in the military, in medicine, and in public service. But I want to be clear, I understand how this decision shakes Virginians’ faith in that commitment. I am ready to do the hard work of regaining your trust.” 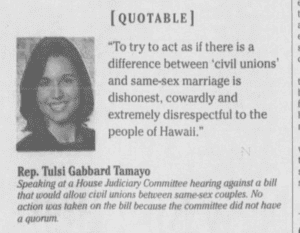 U.S. Representative from Hawaii and Presidential hopeful, Tulsi Gabard, is facing similar furor over past stances against marriage equality and working for her father’s organization, The Alliance for Traditional Marriage, which not only opposed gay marriage but also backed conversion therapy. Tulsi’s apology has been even more heartfelt than Gov. Northam’s.

“In my past, I said and believed things that were wrong, and worse, they were very hurtful to people in the LGBTQ community and to their loved ones,” said Gabbard. “Many years ago, I apologized for my words and more importantly for the negative impact that they had. I sincerely repeat my apology today. I’m deeply sorry for having said them. My views have changed significantly since then.”

And I’m not talking about the economy. I’m talking about personal growth.  As someone who is not just proud of being open-minded, but who embraced Islam in my early 20s after having been raised as an atheist, who went from accepting traditionalist approaches to Islam to being a champion of progressive ones, I worry about elected officials being drummed out of office for views they held as teenagers, and mistakes they made as young men. People can and should grow. Their opinions should evolve, or even change radically as they move through life. Rather than jumping all over politicians for waffling, we should applaud when they are open to new ideas and strategies, when they evaluate new information to revise former positions, and when they see that they’ve been wrong in the past and embrace new points of view.
This is, of course, a sound Qur’anic principle. In the 22nd chapter, Surah Al-Hajj, it says, “Have these people not traveled through the land with hearts to understand and ears to hear? It is not people’s eyes that are blind, but their hearts within their chests.” And again in the 39th chapter, Az-Zumar, “Verily We have coined for mankind in this Qur’an all kinds of parables, that haply they may reflect.”
So when a politician changes their stance as a result of personal growth, rejection of past mistakes or embracing new realities we should rejoice rather than berate them for being wishy-washy.
Real Growth vs Spin
Of course, all too often, when faced with a crisis, politicians (and all the rest of us) resort to spin. When we have made mistakes or held opinions we now see as regrettable or even reprehensible, our first impulse is to apologize immediately or deny, deny, deny. This is doubly true of politicians who are pressured to get head of the conversation and control the crisis before it goes viral on social media and the 24 hour news cycle.
Northman’s knee-jerk apology is a classic demonstration of why this impulse is so problematical. His immediate apology and admission of culpability is undercutting the credibility of his current assertion that he had never purchased the yearbook, didn’t know what was on the page, that neither of the men in the picture is him, and that it must have ended up on his yearbook page in error.
Even if it turns out he didn’t dress up like Jim Crow or a KKK thug, the public is left questioning the quality of his judgment and his decision making process. It’s evident that at least in this case he didn’t take time enough to ascertain the facts of the matter before throwing out an apology. It was a terrorized, oh my God, we have to get out ahead of this momentum before it becomes an avalanche. That’s hardly a way to handle a personal controversy, let along govern a state!
What’s worse, he has now admitted, that, gee, even though I don’t think it wasn’t me in that picture, I did black my face in 1984 to resemble Michael Jackson in a dance contest. Should 25-year old Ralph Northam have known better thirty years ago? Maybe. Blackface minstrelsy has always been deeply racist and patently so. Furthermore, it was thoroughly exposed and repudiated during the civil rights era. But it’s likely that young Northam didn’t associate his Michael Jackson costume with shuck and jive routines. Indeed, we continue to see white actors blacking up to play Othello almost to present day —  Anthony Hopkins for a 1981 TV production, Michael Gambon for a 1990 staging, and Ben Heppner in 2005 for the operatic version. I’m not saying that’s okay, especially given the history of racial exclusion in the entertainment industry, but I do think there are levels of offensiveness and degrees of blame. In the context of the kind of blatant and lethal racism we are seeing all over the country, taking out a democratic governor with a history of working hand in hand with his Black caucus over a 30-year-old sin seems like the barking up the wrong tree.
Having said that, Northam leaves a lot to be desired when it comes to convincing anyone he’s really gained much wisdom since the 80s. Growth comes from deep self-reflection, meaningful relationships, and life-changing experiences. If Northam wants us to believe he is truly committed to racial equality, apologies for something that happened decades ago aren’t enough. What’s his track record on issues of importance to African Americans like voter’s rights, police violence, and racial justice?

He could take a lesson or two from Gabbard, whose eloquence and deep honesty is remarkable as she apologizes anti glbt-bias she no long adheres to. Fundamental to the sea change in her attitudes,were two deployments to the Middle East with the Hawaii Army National Guard. While there,  she witnessed “the destructive effect of having governments who act as moral arbiters for their people. It brought me to a deeper understanding of the meaning of freedom in our country. We cannot afford to walk down that dangerous path of government overstepping its boundaries into the most personal parts of our lives.”

She also mentions the people in her life who helped her see things in a different light. ““I’m so grateful to my friends, my loved ones, both gay and straight, who have patiently helped me see how my past positions on these issues were at odds with my values, my aloha, and that they were causing people harm. That caused me to really deeply reflect and be introspective on the values and beliefs that I had grown up with what I was experiencing there,” she said. “And then coming back and eventually running for office again. And the conflict that I saw there, in standing for, believing strongly in, and fighting for these ideals of freedom and liberty that we hold dear in this country. It means that equality, that our laws, our government must apply that respect for every single individual. For people who choose to love or marry someone — whether they be of the same gender or not, that respect, and that freedom for every woman to be able to make her own choice about her body and her family and her future. So it was a process that I went through that changed my views in many ways and in many big ways to the views that I hold today.””

Even more important, she followed up that process with action. “Over the past six years in Congress, I have been fortunate to have had the opportunity to help work toward passing legislation that ensures equal rights and protections on LGBTQ+ issues, such as the Equality Act, the repeal of DOMA, Restore Honor to Service Members Act, the Employment Non-Discrimination Act, the Safe Schools Improvement Act and the Equality for All Resolution. Much work remains to ensure equality and civil rights protections for LGBTQ+ Americans and if elected President, I will continue to fight for equal rights for all.”

That is the kind of growth we need more of in our leaders. 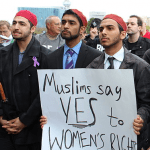 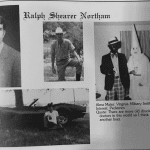 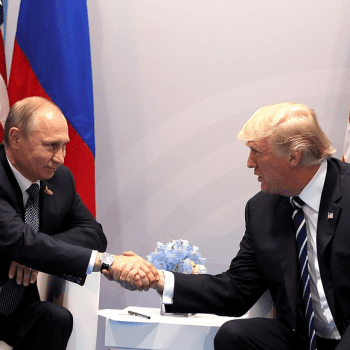