There’s a lot of stigma surrounding casual sex, making it out to be some awful thing that taints the lives of everyone it touches. I beg to differ.

As a scholar, I look for the research. Turns out, there’s been some, though it’s still a somewhat new area of study. My sex ed colleague Dr. Zhana Vrangalova has been studying casual sex, hook-ups, and consensual non-monogamy for a few years now, and also collecting and curating personal narratives about casual sex at The Casual Sex Project. Among other things, Dr. Zhana relays research finding that being in open relationships doesn’t lead to more STIs and that one-night stands are actually the rarest form of casual sex.

So when it comes to empirical statements we can make, more or less accurately, about casual sex, well, we’re starting to discover that casual sex doesn’t necessarily have all the terrible drawbacks people think it does. But as far as the subjective side of casual sex goes… how do we begin to evaluate that?

Here’s the thing: I don’t think that consenting adults doing sexual things with other consenting adults is inherently wrong or bad. How one goes about it matters: there’s a world of difference between pursuing casual sex when you’re single or ethically non-monogamous, vs. when you’re committed to a monogamous relationship.

If pursuing casual sex goes against your values, or violates your relationship agreements, then it might be bad… for you. Or it might be bad for you at this time in your life. I would argue that for folks coming from a religious standpoint, or whose belief systems have specific injunctions about certain kinds of sex, the cognitive dissonance is what makes casual sex feel unhealthy or unethical, not anything that is inherently the matter with casual sex.

As a secular Jewish atheist/agnostic, I don’t have the background in religious texts to say which ones pertain to casual sex. But from the shadowy depths of my memory, it seems that the Biblical prohibitions on sex focus more on adultery than on casual sex in general…and there seem to be redemptive possibilities for the people who have casual sex (didn’t Jesus hang out with sex workers?).

I know some religions teach the importance of virginity before marriage, and again I say: if you’ve decided that’s important to you, go for it. But if it’s being imposed on you – and let’s recall that virginity is a social construct anyway, and the hymen is a porous membrane that’s an unreliable indicator of penetrative sex having happened – then why not reevaluate it?

This is one reason why I like to advise people that if you can’t talk about it, you probably shouldn’t be doing it (obviously if you’re selective in who you talk to about sex that’s fine – it’s more that if you can’t verbalize what you want and what your standards are, maybe you should do some self-work to figure out what’s going on). If something runs so contrary to your values that you can’t figure out the words to express what you want, then you might consider talking to someone about it (spiritual, therapeutic, whatever floats your boat). I’m choosy about what I put online about my sexuality, for instance, but totally willing to have conversations about sex (the sex I’m having, as well as sex as a general topic) with people I know personally.

Again: having casual sex, or thinking about casual sex, or being friends with people who have casual sex… none of these things make you a bad person, or an immoral one, or an unethical one, or an unhealthy one. There are lots of potentially meaningful, vulnerable human activities that we do in uncommitted contexts that don’t draw the fire and shame that casual sex does, and this is because of the “specialness” that our culture affords sex. I think we can and should do better: we need to examine the meaning of sex in our lives, and have more nuanced dialogue around it, not less.

Anyway, I’d like to end with a friendly reminder that it’s not okay to judge consensual sex acts. Or, I mean, I guess you could… but then that makes you a rather judgmental person, and probably a hypocritical one too. 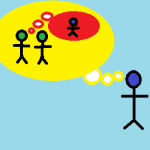 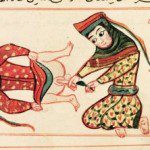 May 11, 2016 Binary Gender Is a Fiction (No Matter What Your God Says)
Recent Comments
0 | Leave a Comment
Browse Our Archives
get the latest updates from
Foxy Folklorist: Folklore, Culture, Sex
and the Patheos
Nonreligious
Channel
POPULAR AT PATHEOS Nonreligious
1