What follows are some Holocaust jokes and scholarly analysis thereof. They’re not nice, they’re not kind, but they’re definitely a part of human culture worth studying.

Another example of jokes that neglect the American role in the Holocaust is a cycle of jokes about the Eichmann trials.  Berger mentions that jokes “are good indicators of what is of interest to people at a given point in time and are often connected to news events, sometimes ones that are trivial and other times of major consequence” (Berger 1995, 163).  As this statement seems generally true (witness the large number of Michael Jackson jokes currently circulating), it is expected that the Eichmann jokes would be the most relevant, hence be in circulation, while the trial occurred.  One informant, who provided the first two jokes, says he probably learned them in school “when Eichmann was on trial in 1960.”  Although the informant is off by a year (Eichmann was tried in 1961), this elicitation of folklore criticism from a member of the folk provides us with proof that folklore does in fact correlate to current events.  These first three jokes were collected in 1965, which was not so far after the date of the trial that they might have faded into irrelevancy in the informant’s mind, while the fourth was collected in 1976, but first heard in 1967.  Three of these jokes treat Eichmann during the period of the trial and all of them assume that he is single-handedly responsible for the extermination of the Jews.

One day Adolph Eichmann was walking back to his cell and his guards handed him a letter.  He read it and fainted.  Do you know what was in the letter?  It was his gas bill for 1944.

This is an Eichmann joke.  Do you know what Adolph Eichmann’s sentence was?  $25 fine for burning trash.

Did you hear they let Adolph Eichmann go—he promised he wouldn’t do it again.

Shortest Book in the World: Jews I have Liked, by Adolph Eichmann

The first joke assigns personal responsibility to Eichmann by making it appear that he has paid out of pocket to gas the Jews; this assumption reflects the chain of command in Nazi Germany wherein everybody tried to shift his liability onto a person of higher rank.  The second joke mocks Eichmann’s death sentence by implying that he could provide monetary compensation for his crimes, and moreover, that his crimes were not really crimes at all, but rather a necessary disposal.  Both of these jokes hinge on the incongruity of linking human lives with money, a trait which probably appeals to capitalistic American tellers and audiences.  The second joke projects—on someone‘s account—the idea that the Holocaust was both good and essential.  The third joke plays on the claim that the Holocaust is completely unique in world history, thus unearthing serious concerns about an event’s ability to set a precedent.  This joke also implies that the legal system of “they” (presumably Israel) is weak and forgiving, perhaps a veiled jab at Jews.  The fourth joke in this cycle utilizes to a format often used to ridicule other
“authors,” and it projects onto Eichmann not only personal responsibility for exterminating Jews, but also a personal motivation, whereas his testimonies show that he was most likely more interested in advancing his own position.  It is as though the tellers of this joke need to believe that Eichmann committed the atrocities of the Holocaust for a reason they could identify with, rather than operating on an abstract level.

Facilitating mass executions is the theme of another subgroup of Holocaust jokes, those that deal with fitting Jews or their ashes into certain spaces.  Both of the jokes below have numerous analogues without substantial thematic variation in the Folklore Archives, so I have only provided one text of each:

Did you hear about the new German microwave oven?

How do you fit twelve jews [sic] into a Volkswagen?

Two in the front, two in the back and eight in the ashtray.

The first joke can be told with or without the “microwave” aspect of the oven, and the number of “seats” can vary.  Those versions told about a microwave oven provide us with a terminus post quem, or “point after which,” the joke had to come into existence, because the joke could not have been told like that before microwave ovens had been invented.  This is one way of knowing that a joke is still relevant—it adapts to incorporate new technology years after the original event.  A number of implications are present in the joke: Germans are scientifically pioneering, they are as a whole incapable of shedding old prejudices, and they openly advertise their genocidal agenda.  Though these assumptions are projections in the mind of the joke teller, they may also conceal jealousy over the Germans’ alleged technological capabilities.  The second joke also exists in numerous versions, the main point being that one can fit a lot of incinerated Jews into a vehicle.  Perhaps it is the incongruity of this image that makes it appealing, but there is also the possibility of a psychoanalytic interpretation, that this joke allows one to release unconscious hostilities toward Jews, Germans, or both.  Again, the Germans have shown themselves to be ingenious problem-solvers, a point which may aggravate unconscious jealousy of the Germans’ destructive innovations.

The best-documented Holocaust joke in the Folklore Archives involves a comparison of Jews to pizzas:

What’s the difference between Jews and pizzas?

Pizzas don’t scream when you put ’em in the oven.

What’s the difference between a German-Jew and a pizza?

What’s the difference between a Jew and a Pizza?

You don’t laugh when you put a pizza in the oven.

The first version displays the basic, most standard format, and it also the most recent version, collected in 1998, indicating that these jokes are still in circulation.  An incongruity theory approach to this joke would posit that the humor lies in the unexpected linking of a human being with a food.  A semiotic approach might take this line of reasoning further to point out that the oven is only a middle step in the logical development of a pizza, and to continue the parallel with Jews would imply cannibalism, which is (should be?) as taboo as the burning alive of a human being.  Psychoanalytically speaking, this joke could reflect oral hostility on the part of the hypothetical teller of the joke, or a fantasy of eating human flesh, both of which imply a regression to an earlier state of existence, the first to infancy, the second to primitivism (which are linked in Freud’s concepts, as ontogeny recapitulates phylogeny to him).  The second joke strengthens the link between Jew and pizza as edible matter, because they have a cooking time within fifteen minutes of each other.  The third joke is unique because of its undisguised antagonism to Jews; interestingly, the informant who reported it was also Jewish.  This could either be an example of a masochistic sense of humor, as Freud has suggested is present in Jews, or it could be a trait belonging to a trend of more openly cruel jokes such as dead baby jokes, which sometimes involve getting pleasure out of some aspect of killing or mutilating an infant.  Cannibalism is another trait present in many dead baby jokes, so perhaps this Jew-pizza association is a way of bringing up another taboo topic that generates anxiety.  Since cannibalism occurred in at least a few known instances in concentration camps, this joke could also address unvocalized concerns about that experience.  One projective fantasy might run as follows: if Jews were forced to eat Jews in the concentration camps, perhaps it became as normal/pleasurable as eating a pizza, thus being a Jew in the concentration camps wasn’t so deplorable a situation, or alternately Jews are recyclable and, like disease-contaminated cows, filthy for eating their own (for more on the folkloric connection between Jews and filth, see Dundes, Life is Like a Chicken Coop Ladder, 1984). 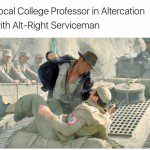 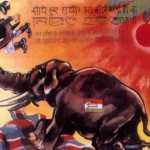 November 29, 2016 Dehumanized and Rationalized (5/6)
Recent Comments
0 | Leave a Comment
Browse Our Archives
get the latest from
Foxy Folklorist: Folklore, Culture, Sex
Sign up for our newsletter
POPULAR AT PATHEOS Nonreligious
1