A return to conference blogging…which is also about the return of the uncanny and the undead, appropriately enough, given that this year’s ICFA theme was Frankenstein!

Longtime readers know that ICFA, or the International Conference on the Fantastic in the Arts, is one of my all-time favorite conferences. I’ve been attending for over a decade and some of my favorite people come to it. It is truly an international conference, with a wide array of disciplines represented, and it’s got a creative as well as a scholarly component, and… yeah. I could go on and on about it.

Last year’s ICFA theme was Fantastic Epics. Despite being a folklorist I was woefully un-knowledgeable on the topic, so I studied up, rolled in knowing my stuff, and had a great time.

This year’s theme was “200 Years of the Fantastic: Celebrating Frankenstein and Mary Shelley.” 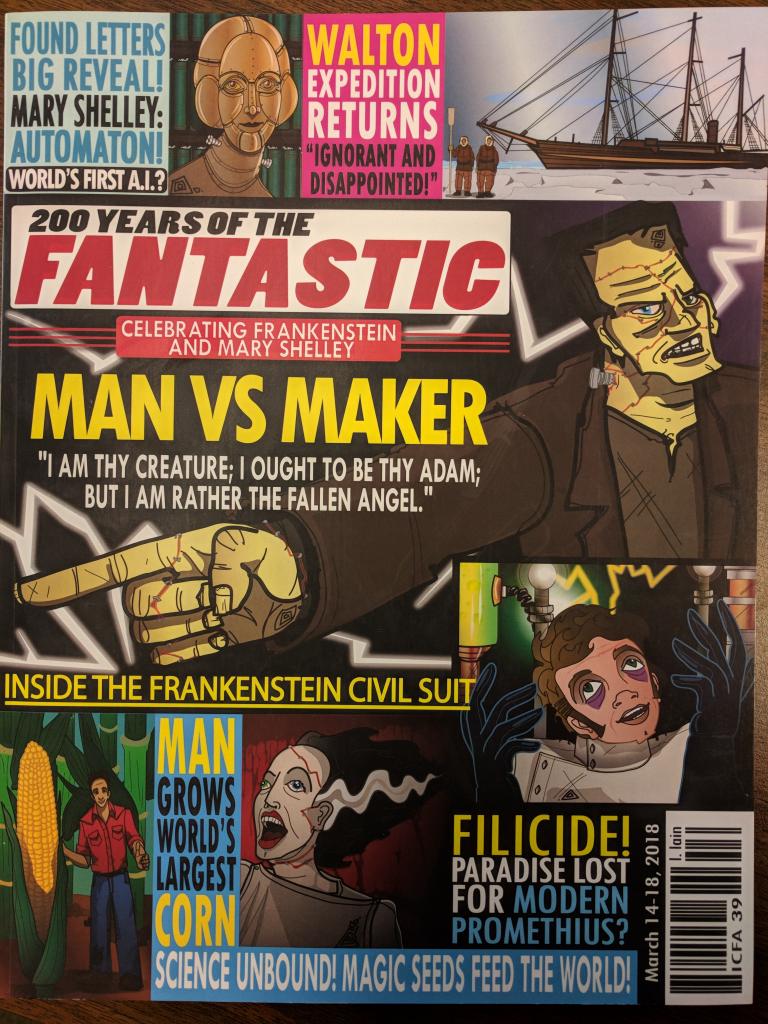 And… I’d never read Frankenstein. Somehow it’d never been assigned in the various English classes I’d taken, and somehow I hadn’t picked it up on my own.

Regardless, I agreed to serve on a panel on Frankenstein & Folklore, so I did some background research on northern European artificially created beings (like Ilmarinen’s metal wife in The Kalevala and the tupilak, a creature of bone and flesh, from Greenland Inuit folklore) and finished reading Frankenstein on the airplane to the conference. I recall saying some brilliant things at that panel but I’ve slept since then so I don’t quite remember (something about the flattening of fairy-tale characters and the flattening of characters in the novel? it escapes me now).

One other reason I adore this conference, of course, is that it’s in Orlando, which is always nice to visit after an Indiana winter. (as I write this in late March, in fact, there is A TON OF SNOW on the ground here in Indiana and I’m SO UPSET about this because WTF WEATHER)

To the right, you can glimpse the stylish program cover, which draws attention in a sensationalist way to the conflicts in Frankenstein that are still relevant today: genetic engineering, scientific exploration, and more. In many ways, Frankenstein paved the way for stories about mad scientific geniuses, male and female versions of monsters, and even intricate uses of frame narratives (I didn’t know, until I read the bloody book, that there are up to three and at time four nested narratives at a time in Frankenstein: the Arctic explorer Walton, and Victor Frankenstein, and the creature, and then the people in the hut whose story he learns – this is a very sophisticated story, and I had no idea based on the pop culture versions I was familiar with).

I also gave a paper on Lost Girl, a TV show I’ve been poking at on and off for a few years now. I really want to publish something on it, but my thoughts remain scattered. I’ve researched folklore and folk narrative in the show, gender and sexuality in the show, how science is represented in the show, and now, in keeping with this year’s theme, monstrosity in the show. I have so many ideas and no clue where to go with them in a cohesive fashion, arg!

(one friend suggested I write a book on Lost Girl; I basically laughed in her face because academic publishing is awfully exploitative unless you stand to gain something else from it, such as tenure)

One unexpected thing that happened at the conference was that I got an idea for an article on Frankenstein. I haven’t even begun to poke at the lit review, to see what’s already been said on the gender/sexuality topic I want to explore, but I’m sure there’s tooooons out there already. Luckily I found a collaborator who already works on Frankenstein and agreed to coauthor the paper with me, so that’ll make things easier on that front. And no, I’m not going to say what the topic is because I think it’ll be a hot topic and I don’t want anyone to poach it.

Another unexpected thing is that I fell in love with the writing of Carmen Maria Machado. Folks had been telling me to read her book Her Body and Other Parties and I… just didn’t get around to it.

But I saw Machado read a story from the book during one of the author readings that ICFA features during every open slot in the schedule. It spoke to me so much that I left the room in tears, and immediately went to buy a copy so Machado could sign it for me. I’d never felt so seen, so represented, in a short story before.

To the right is a pic of Machado winning the prestigious Crawford Award for Her Body at the ICFA Banquet. Her dress was killer, and her message about the timeliness of sci-fi/fantasy representations of the Other was quite needed, in my view.

I saw some great author readings, by folks whose work I admire like Max Gladstone and Theodora Goss (they’re both wonderful, read them when you get the chance!). And I hung out with author friends like Shveta Thakrar and Fran Wilde, though unfortunately I missed their readings (there are more I’m not naming here; this post could so easily turn into a list of fun friends/acquaintances I look forward to seeing every year whose work I also enjoy, or am looking to get into). Maaaybe someday I’ll submit to do an author reading at ICFA; for example, my poem “The Witch’s House” just went live at Liminality.

I didn’t live-tweet the conference as much as I’d’ve liked because my phone bricked early on, and I had to scramble to get a loaner (but luckily a friend came through for me). The hashtag was #ICFA39 if you want to check it out, though. Of course I recommend checking it out.

I saw some great papers about disability in sci-fi/fantasy, medical history as seen in sideshow “freaks” on display (including their preserved corpses), serial killer husbands in fairy tales and fairy-tale-inspired romance novels, and “Beauty and the Beast” intertexts in young adult fantasy fiction.

Overall, it was great seeing the new Fairy Tales & Folk Narratives division flourish. We sponsored a number of paper sessions and panels that helped fill the schedule with our oh-so-good scholarly content. It feels great to know that we’re building an institutional home for fairy-tale & folk-narrative scholars.

I didn’t get to as many papers as I would’ve liked, in part because this semester is freaking killing me and I needed a lot of sleep. I wasn’t as emotionally fucked up as I was last year at the conference, still feeling all the recent divorce feels and “holy shit I just put all my things in storage to move across the country and teach my dead mentor’s class at UC Berkeley feels,” but this year has had plenty of its own challenges.

On the whole? Coming to ICFA still feels like coming home. I have old friends I adore, and every year I meet cool new people who quickly fall into the category of good friends I haven’t known as long.

Further, the relevance of the conference is inescapable, as much as we study stuff that could be glibly dismissed as escapism. Speculative fiction continues to demonstrate that what we classify as “fantasy” has just as much relevance to reality as what’s classed as “normal” fiction. It shows us the limits of what is deemed possible, and who is deemed human. And the political events of the last few months alone illustrate just how much these categories are still under debate.

April 21, 2018 The #TriangleSCI Proposal On Risk in Sexual Scholarship I Desperately Want to Write
Recent Comments
0 | Leave a Comment
Browse Our Archives
get the latest from
Foxy Folklorist: Folklore, Culture, Sex
Sign up for our newsletter
POPULAR AT PATHEOS Nonreligious
1