Obviously I love belly dance; I teach it, I direct a troupe, I perform it, I blog about it, and my costume collection is…let’s just generously say it’s getting to be quite extensive. But I have some concerns about who the community is really for.

Recall that someone who’s “cis” (short for cisgender) identifies with the gender they were assigned at birth. Combine it with “het” (short for heterosexual) and you get cis het: a term I don’t believe is offensive, but rather, one that can be applied to describe a huge chunk of the population.

My concern is that belly dance is primarily by and for cis het women. We make it safe for us, and goodness knows women could use more safe spaces in this misogynist, sex-negative culture, but in doing so, who do we risk excluding?

There are, of course, men who belly dance. I’ve met some of them, and danced with them, and they’re pretty awesome. They’re very much in the minority, and my impression is that when they enter the belly dance community, they do so respectfully. They get that this is mostly a space for women, and they’re not here to intrude, they’re here to enjoy the dance and the community, just like we are.

See also: That Time Someone Called the Police on Me in Belly Dance Attire

However, I worry that some of the rhetoric found in the mainstream belly dance community might exclude people who aren’t cis het women: women who are attracted to women (whether they identify as bisexual, lesbian, queer, pansexual, or other), trans women, non-binary folks, women who weren’t assigned female at birth for whatever reason (such as having an intersex condition), and more.

As a folklorist studying belly dance, I know that we can talk about its origins in terms of legends, or narratives that are told as true in their communities. And I’ve heard many renditions over the years of this origin story: that millennia ago, the women of nomadic tribes in the Middle East and North Africa used something rather like belly dance in birthing rituals, both to condition their muscles to help them deliver smoothly, and to encourage the woman giving birth.

It’s a nice story, but as with many sources from oral tradition, it’s damn near impossible to verify.

Pair that with the language that many belly dance teachers employ to get their students thinking about moving their hips and loving their curves, and you might begin to see why this could feel exclusionary to someone who lacks female reproductive anatomy, or has a vexed relationship with it, or doesn’t occupy a body thought of as “feminine enough” (which might be true whether you’re a cis woman or not – the double-bind of idealized femininity in a patriarchy sucks for everyone like that).

Not all women have uteruses, or want to use them to grow a new life if they do. Not all women have curves, or prominent hips. Yes, there are some skeletal differences between most men and most women, but we shouldn’t emphasize those if it means being exclusionary to our students.

Does belly dance has some connection to concepts of a feminine divine? It does for some people, though the historical reasons for it are somewhat convoluted and difficult to trace. If nothing else, contemporary neo-pagan beliefs and practices offer plenty of room for such meaning-making, and I don’t have a problem with that.

What I do have a problem with is the assumption that there’s something essentially feminine about belly dancing that necessarily connects to a feminine divine. Sometimes that works for me, but mostly it doesn’t.

I’ve heard other teachers refer to a certain raised-arm position as “goddess arms,” but I don’t use terms like that when I teach because I don’t want to alienate people who don’t identify with that kind of femininity (or divinity, since I’m also an atheist and I want atheists as well as religious believers to feel comfortable in my classes). 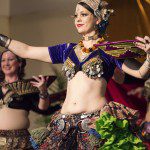 October 22, 2016
How I Got into Tribal Belly Dance
Next Post 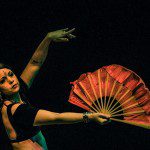 October 24, 2016 Is Belly Dance for Cis Het Women? Part 2
Recent Comments
0 | Leave a Comment
Browse Our Archives
get the latest from
Foxy Folklorist: Folklore, Culture, Sex
Sign up for our newsletter
POPULAR AT PATHEOS Nonreligious
1