In the wake of yet another mass shooting, I’ve seen men on Twitter suggesting that we legalize sex work in order to give these poor sexless dudes an outlet so they don’t go on shooting sprees. But this is just as bad as the enforced monogamy nonsense from Jordan Peterson, and it relies on women’s bodies and emotional labor to build peace.

I’ve been done with Jordan Peterson for a while, thanks in large part to his blatant misogyny and his bad ideas (and poor use of anthropological concepts and case studies) such as enforced monogamy. That is, he arrived at the idea that monogamous pair bonding makes men less violent… and thus, to curb male violence we should encourage women to be there for men to mate with or whatever.

Just… ugh. As I’ve written, sex might be a resource that people choose to employ in their lives, but women, women’s bodies, and women’s emotional labor do NOT exist in convenient resource-form for men to exploit and use. If for whatever reason you believe this – and I get that we receive a lot of cultural conditioning along these lines – then you’ll want to examine your beliefs about who gets to be fully human and entitled to emotional, social, and/or sexual care from others.

Why am I bringing this up? Because, as @CardsAgstHrsmt tweeted, there are whole bunches of men on Twitter suggesting that if we just legalized sex work, and seemingly-under-sexed men had more access to sex, maybe we’d end this spate of violence. The sad thing is, I don’t even know which mass shooting inspired this bunch of tweets. 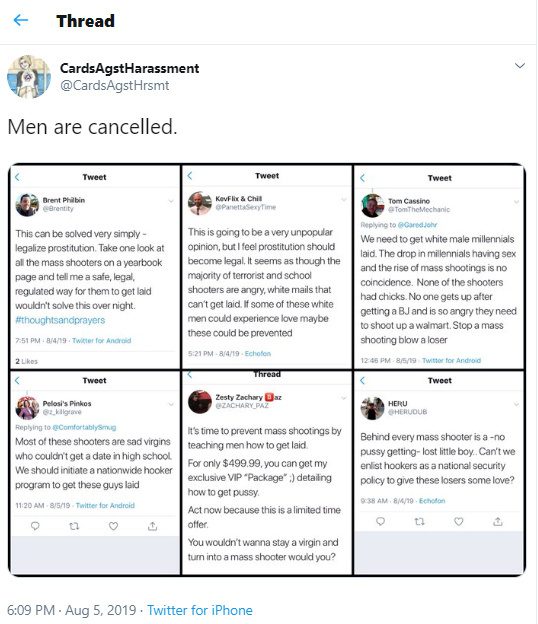 I’ll transcribe the tweets for anyone for whom that’s helpful:

So, why am I comparing this to Peterson’s enforced monogamy idea? Well, it’s exactly the same at the heart of it: both ideas posit that men become violent when denied (easy) access to sex (aka the sex partners they find desirable), and hence we should remedy the root cause of this violence by making sure (the right) women are sexually available to men.The main difference is that Peterson is encouraging men to play inside the lines of acceptable monogamous behavior, and try to find a woman to wife, whereas these other dudes are saying that the burden of reforming potentially-violent dudes should be shunted onto sex workers.

While divergent in which women each idea thinks should selflessly sex up and hence reform shady men, both ideas share some key flaws. They ignore what the women in question want, and assume that either as wife/girlfriend material or as savvy sex workers, these hypothetical women will acquiesce and fuck these violent men, without any thought to their desires. These ideas both ignore the fact that many of the mass shooters have a history of domestic violence – so clearly they DID have access to female companionship in some form. And clearly it did not “fix” them.

Moreover, based on what we know of the domestic violence history of violent men, these ideas reveal a lack of care for women’s welfare. It’s like, sure, just go ahead and use women as a flesh shield to try to keep men’s violent impulses at bay, that’ll go great for the women, right?! The idea of enforced monogamy suggests it’s fine to throw all (heterosexual) women under the bus, while the Twitter crowd narrows that down to it being acceptable to throw sex workers under the bus (sadly not a new idea, and also one that should be unpalatable to, like, everyone).

Both ideas are horridly sexist and misogynist, in that they classify women as a subspecies of human that owes their male counterparts social, sexual, and emotional labor (which I explain more here). Both ideas are a terrible reminder of how alive and well misogyny is today, which is why I’m kinda obsessively reading about it. Both ideas instrumentalize sex and dehumanize women, both in terms of making women into caregiving sexbots and in terms of not giving a shit about how this might impact said women.

Having been in relationships with abusive men, let me assure you: these men were not waiting for the right angelic woman to come along and point the way towards sublime peaceful pair-bonded living. They were looking for paths to continue getting their way and keep controlling/abusing others. Women do not exist in order to reform men, whether the women are considered heteronormative wife/girlfriend material or whether they’re sex workers taking on clients.

So, even though it might appear worlds apart to suggest that sex workers should take on the burden of being companions to potentially-violent men, or that women should be nudged in the direction of monogamy to help soothe these same men with pair-bonded sexytimes, they rely on the same horrific misogyny at their core. And I hope that if you see these ideas, you’ll challenge them, because again, it’s beyond disappointing to realize that you’re being reduced to mistaken and outdated ideas about the magical healing powers of your genitals and gender rather than being perceived as a whole human being and I’m fucking sick of it. 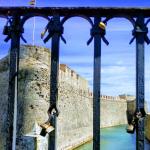 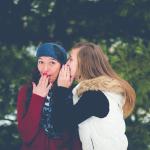 August 13, 2019 There Is No Such Thing as Toxic Femininity
Recent Comments
0 | Leave a Comment
Browse Our Archives
Follow Us!