American anthropologist Ruth Benedict once said, “We do not see the lens through which we look.” So it’s always impressive when someone manages to do just that…and terrifying when it turns out to be an authoritarian religious perspective.

As I’ve written, one of the ways to uncover worldview is by studying folklore…but we also get glimpses of worldview through institutional and elite facets of culture alongside the folk ones. Examining schooling systems, print culture, and official religion can yield insights into a group’s core values, and this too is a worthy project.

That’s why I recommend reading this Autostraddle post: I Was Trained for the Culture Wars in Home School, Awaiting Someone Like Mike Pence as a Messiah.

It helps illustrate why Pence is being hailed by so many as a savior, despite his obvious shortcomings (including fun things like him being a cigarette truther, advocating gay conversion therapy a.k.a. torturing teens through electrocution, creating a huge HIV crisis in Indiana, and doing terrible things to reproductive rights).

The level of indoctrination the kids coming from the religious right have experienced is terrifying. For example:

As students, we were taught critical thinking skills but given only a narrow view of what was acceptable to argue for. We were, after all, being trained to take over the country for Christ, literally. We knew how to perform logical gymnastics about abortion, Christianity and any evangelical talking point you could throw at us.

When we showed up to city council, local political party meetings and tours of the Capitol we asked intelligent questions, were respectful and had a vested interest in how our local political machine ran. We impressed every government official and staff member with our questions, earnesty and demeanor. In short, we were sneaky and polite Trojan horses; we had an agenda. Yes, even as 15-year-olds. It was forcefully handed to us by the adults in our lives who had been preparing for this since before we were born.

It takes courage and reflective awareness to articulate so much about the culture you grew up in, and the values that were promoted in so many ways, through both official and unofficial culture channels. Go read the whole thing if, like me, you’re preparing to engage. 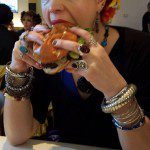 January 30, 2017 I've Stopped Weighing Myself and I'm Pleased as Punch
Recent Comments
0 | Leave a Comment
"Oddly, my own experience of college as a student was that with a few exceptions, ..."
Jim Jones What Do I Even Write About ..."
"Its what you do that matters not what you say. with that being said freedom ..."
Brianna LaPoint The U.S. Has Never 100% Upheld ..."
"Depending on what speech and whose speech."
ounbbl The U.S. Has Never 100% Upheld ..."
"Kneeling? Like in a photo people kneeling in front of photo of an ex-convict? BTW ..."
ounbbl It’s Not Free Speech Oppression If ..."
Browse Our Archives
get the latest from
Foxy Folklorist: Folklore, Culture, Sex
Sign up for our newsletter
POPULAR AT PATHEOS Nonreligious
1