When we talk about snakes and feminine sexuality, there’s more to it than the dreaded vagina dentata!

On even a simple level of projection, informant data would be useful in order to try to determine the tellers’ attitudes toward snakes and spouses.  For instance, it would be helpful to know whether the narrators of tales with snake husbands were men, women, or both, as for tales with snake wives.  Fanny Hagin Mayer’s collection of Japanese folktales lists informants for some of the tales, but includes only names and ages—there is no mention of occupation, level of education, or even gender (for those scholars who are not well enough acquainted with Japanese to know the naming system).  There have been suggestions that folktales are primarily a women’s art (Muhawi and Kanaana 1989), in which case certain tale roles, for example those valuing women’s actions and positions, would make sense.  Kawai remarks of the snake wife tale, “It is the woman who is active in the marriage, the work, and the divorce.  The man is always passive….it becomes clear that they are stories of women” (1982, 113).  If these are stories of women, are women telling them, or part of the audience, or completely excluded from the tradition?  However, lacking access to Japanese language archives, it is impossible to pursue the weighty issues of context-related meanings further here.

Forced to give up on anthropological particulars, it is possible to turn to symbolic interpretations that can legitimately offer broad theories because they draw on multi-cultural specifics.  In addition to menstruation linking women and snakes, as seen above, “woman’s menstrual cycle and ability to bear children emphasize her link to the natural world” (Leavy 1994, 222).  Serpents fit into this paradigm because they, too, are part of nature, not civilization.  Other ethnographic evidence amounts to the perception of menstruation as a “phase—symbolized as the new moon or the serpent’s skin,” essentially a “fertile death,” which will be “part of a continuous process of change which will bring new life” (Cardigos 1991, 60).  Here too are snakes associated with the symbols of women’s abilities to create new life in part of the cyclic reality of nature.  It is also possible to take these associations a step further with “the equivalence of menstruation and sloughing—thus, metamorphosis” (Vaz da Silva 2002, 191).  To Vaz da Silva, fairy tales themselves are metamorphoses, and all the characters within them metamorphose in varying degrees.  Virginal maidens, considered nearly worldwide to be poisonous because they are associated with serpents and with the unavailability taboos of menstruation, must be tamed in order to become accessible for marriage (Va da Silva 2002, 178-79).  The plots of various fairy tales revolve around these transformations, through the agencies of dragon-slayers and magical helpers, affecting an evolution from one state of existence to another.  Or rather, it is a cycle.  Women’s sexuality passes through ophidian and fertile phases, leading to a cyclical logic that underlies symbolism in cultural expressions.

Further evidence of the cyclicity of snake spouse folktales lies in the plots and features of the Japanese folktales.  Structurally, the initial state in both snake wife and snake husband folktales is a lack of spouse, and the final state is the same, as Norimitsu Tosu shows (1985, 135-136).  In particular, in animal bride folktales “the [Violation] of the [Interdiction] by the hero causes the dissolution of the marriage” (Norimitsu 1985, 127).  The result is the same in all tales involving snake spouses: termination of the marriage, almost as though it had never been.  From a wider perspective, taking into account mostly European folktales, legends, and literary retellings, “the story of the animal bride is cyclical, because the bride returns to her initial form” (Sax 1998, 204).  Gender is a dividing factor in the ways in which cyclicity manifests in the tradition.  In general, “in Japanese non-human marriage stories, many non-human bridegrooms are killed whereas non-human wives never are.  They just leave their homes” (Kawai 1982, 117).  The reasons for violence, or lack thereof, towards the supernatural spouses are also a part of the cyclicity of the themes and tales.  Snake bridegrooms are a threat to the human world and cannot, from the human perspective, be allowed to survive.  Sometimes it is enough that they are prevented from claiming their brides, as in Mayer’s non-lethal version of “The Snake Son-in-law” (1984, 38-39).  This forceful parting allows human females, who are associated with rebirth through the properties of menstruation, to resume their own (presumably cyclic) existences.  As Keigo Seki summarizes the tale cycle, “the husband is actually an animal and must be killed so that the bride can return to normal society” (1963, 167).  There is no need to do violence to snake wives, however, because they simply represent another facet of femininity, one that happens to be taboo to men, just as menstruation, birth, and death—other serpent associations—often are.  Their seclusion is enough to restore the balance. 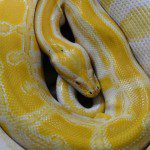 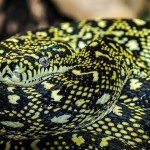 January 3, 2017 Snake Spouses and Feminine Symbols in Japanese Folktales Part 5
Recent Comments
0 | Leave a Comment
Browse Our Archives
get the latest from
Foxy Folklorist: Folklore, Culture, Sex
Sign up for our newsletter
POPULAR AT PATHEOS Nonreligious
1