What I’ve Been Up to in the Folklore World

What I’ve Been Up to in the Folklore World February 28, 2021 Jeana Jorgensen

A lot of academic work is invisible and goes unrewarded…well, somehow a bunch of rewards just dropped into my lap all at once, so I thought I’d share them here (since my blog varies in its folklore content but that’s kinda my main profession, at least for now!).

Like many academics right now, I’m feeling isolated and uncertain about the value of my work. Like, people are dying, why does yet another academic publication filled with jargon matter?! But I’ve had a few things happen lately that reaffirmed the value of academic work especially in a tight-knit community like folklore studies.

First, my folklore colleagues who run Folkwise interviewed me earlier this month. Folkwise is a recent endeavor that involves education around folklore’s connections to modern and daily interests such as gaming, and so they interviewed me on their weekly Twitch stream where they play a folklore-related video game and then interview a scholar with relevant interests. I had a blast, and thoroughly enjoyed both the chatter and the specific interview questions.

If you want to watch the Folkwise recordings on YouTube, you can find them here. Here is part 1 of my appearance, where the hosts play “The Wolf Among Us” (based on the graphic novel Fables) overlaid with my commentary, and here is Part 2, where I’m interviewed about my research. I knew that not every viewer had a background in academic folklore studies, so I tried to make my answers really easy to understand if you’re not steeped in academic jargon…so give it a listen if you’re interested in learning more about folklore and fairy-tale studies!

Then, I got a real shocker this past week…so basically, The Journal of American Folklore, the flagship journal of the American Folklore Society, has been published since the 1880s. And AFS just released some new information, having run the numbers on which of the JAF articles have been viewed/downloaded the most, ever. My article on women’s bodies and beauty in fairy tales made the top 20 list!!! Like, y’all, I am on a list with luminaries such as Zora Neale Hurston and Claude Lévi-Strauss.

The really amazing thing about this, in my opinion, is that this article was originally a dissertation chapter, and the revision process to whip it into shape as a journal article was so discouraging that I almost gave up. I guess there’s a lesson in here somewhere about the importance of persistence, but really, I mostly need to thank all the friends and colleagues who supported me and encouraged me not to abandon the work.

Also in the works, I have 2 journal articles about various aspects of trauma in fairy tales and fairy-tale retellings that will see the light of day, um, sometime in the next year probably? And I have a journal article about doing work in the field as someone who’s on the margins due to labor practices, plus a book chapter about educating about folklore studies through blogging and social media, also set to come out sometime in the next year-ish (and there are 2 collab pieces in various stages of finding homes that are a bit outside folklore studies but still pieces I’m excited to share once they’re live).

Perhaps the actual really amazing thing to note about all this is that I’ve produced most of this work without a stable institutional home. Most prolific scholars are on the tenure track: they have lighter course loads and job security and access to research funds, and research/publishing is part of the job description. That’s never been the case for me, and sometimes I wonder what my research agenda might’ve looked like if I’d actually found job stability earlier, or ever. Maybe I would’ve been able to pick up fieldwork again (try to get through IRB as an adjunct at multiple institutions, lol) or stick with the fancy digital humanities stuff I’d explored in my dissertation. Who knows what direction I might’ve gone in, what books I might’ve written.

I am, again, at a bit of a crossroads in regard to my career, since I really hope I can continue to teach where I’m at, but that may come down to budgetary decisions totally outside my control, which is a familiar and sad story for those of us who are contingent academics. And if I find myself a homeless academic (hopefully not literally, but with the pandemic, who knows), can/should I continue my bizarrely ambitious research agenda to Do All The Things that interest me?

Part of me thinks, yes. The past few weeks have been incredibly validating as I’ve been participating in lots of discussions online with my colleagues, such as the Folkwise guest spot (and I’m being interviewed on a folklore podcast later today!).

But then I get derailed by all the weird cognitive dissonance of being a valued member of my academic community when I don’t know if I can secure employment for myself or not, not due to any personal/professional failings but because that’s how the neoliberal university works these days. Unlike in the “real world” I can’t just send a resume or CV around and hope for the best; the academic job market season is a year long work-intensive blood bath and takes place a year out from any employment one hopes to procure, usually, unless it’s to fill a last-minute opening and then you’re expected to move and plan a syllabus on excruciatingly short notice. There are many people who are not 100% on board the “assumed to be normal” train for whom this contract academic labor DOES NOT WORK, such as people with deep family obligations in one place or people with disabilities and chronic illnesses for whom it’s not worth uprooting to move when you need multiple doctors to keep your body running. And as a queer person who wouldn’t thrive in a rural place that hasn’t unlearned bigotry, I also am not in a position to move for any job that catches my attention.

When I first experienced failure on the job market, I decided that if I let academia be my whole life, it would ruin me. It wasn’t worth feeling depressed and worthless all the time as a result of a crashed job market that disproportionately impacted a small field like folklore studies. So I started a dance troupe (two, now) and made local friends and made a life for myself here in Indiana. My support networks got me through horrifically tough life events such as divorce. Even if the “perfect” academic job would come along (and I’m so burned out, no job seems perfect anymore), should I really give up everything I’ve worked for, every seed I’ve planted here, to move and take it?

I may never be a luminary in my field; I may never write that discipline-defining academic book. But the corner of the folklore world I’ve carved out to inhabit, and then found bridges aplenty to areas populated by allies and friends, seems like enough. For now, at least, I’ll take it as a win. 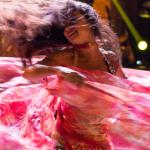 February 21, 2021
If American Belly Dancers Protested Colonialism As Much As Our Dance's Sexualization...
Next Post