Why #AskDrPence Is the Best Thing on the Internet

Why #AskDrPence Is the Best Thing on the Internet March 26, 2016 Jeana Jorgensen 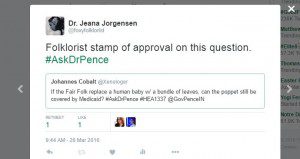 I haven’t written much about internet folklore (maybe in an upcoming #FolkloreThursday post?), but let me briefly state this: folklore circulates on the internet, it’s not just limited to “oral tradition,” and digital/internet folklore is just as interesting to scholars as the really old stuff.

In case you haven’t seen it in the news, Indiana (where I currently reside) just passed one of the most restrictive abortion (and miscarriage) bills in the country, requiring an 18-hour waiting period between the decision to abort and the ability to do it; making illegal an abortion presumably based on the fetus’s gender, disability, or any abnormalities; and requiring providers to pay to cremate or bury fetal remains from every abortion or miscarriage, a cost that will likely trickle down to impact the people seeking abortion.

The local coverage on Nuvo is pretty thoroughly explains the bill and contains personal narratives (one of my fave folklore genres) from women who would be negatively impacted by it. It also contains screenshots of the initial response to the bill, including at least one quoting me.

However, if you want to see the digital folklore evolving, it’s happening over at the Twitter protest hashtag, #AskDrPence. A number of us hopped on board the hashtag between last night and this morning, in order to protest how our governor, who is not an MD, passed a bill that invades a pregnant women’s right to privacy, gets between her and her doctor, makes medical care less accessible and affordable, and is generally awful.

It’s digital folklore because there are jokes being made, traditions being established, and even parodies occurring (with the creation of a satirical @MikePenceOBYGN account topping the list). All in less than a 24-hour span!

I’ve gotta dash, but I wanted to make this blog post ASAP so that we can start documenting and having a conversation about this instance of digital folklore protesting a policy put into place for religious reasons. What do y’all think? Care to join the conversation over at the #AskDrPence hashtag? 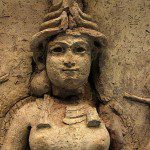