Some thoughts on Martin Luther King, Jr. Day: Are we better than this?

Some thoughts on Martin Luther King, Jr. Day: Are we better than this? January 20, 2020 vancemorgan

On this Martin Luther King Jr. Day, I am reminded of a few days I spent in the nation’s capital last August while Jeanne worked at a large veterinary conference. While she worked, I walked many miles, including past the MLK memorial and the Lincoln Memorial, where he delivered his famous “I have a dream” speech. While we were in D.C., two mass shootings occurred, one in Texas and one in Ohio. I wrote about the whole experience a few days later–my thoughts then remain my thoughts today . . .

In the aftermath of two more mass shootings last Saturday, I read a number of well-intentioned posts and tweets on social media saying something along the lines of “We are better than this” and “This is not who we are.” With all due respect, let me counter that we are not better than this, and this is exactly who we are. Until we recognize what we have become, rather than pretending that we are what we wish or hope we might be, nothing will change. And something must change.

I spent this past weekend in Washington DC, joining Jeanne as she worked a convention. With a number of hours on my hands and beautiful (but hot) weather, I walked over thirteen miles in a couple of days seeing the sites. Saturday was tourist day, as I hit (in sequence), the Washington monument, then the Jefferson, FDR, MLK, Korean War, Lincoln, Vietnam, and World War II memorials in succession.

Sunday turned out to be a “Church and State” day, as I first went back to the Mall to take a picture or two of the US Capitol, then rode the Metro and walked three miles each way to visit the Washington National Cathedral. This had been on my “to do” list ever since the clergy staff of the Cathedral published a statement last week condemning President Trump’s recent racist statements, about which I wrote on this blog a few days ago:

After the news on Sunday morning of the El Paso and Dayton shootings, I had to make the pilgrimage.

As I sat in the beautiful sacred space catching my breath from the mile and a half hike uphill after getting off the Metro, I soaked in the stillness and peace and took a moment to center myself. A few dozen other people were scattered throughout the sanctuary; a group of twenty or so were listening to a docent on a tour. I thought of a prayer that I had seen on a different DC Episcopal church’s website that morning as I looked for the Cathedral website. 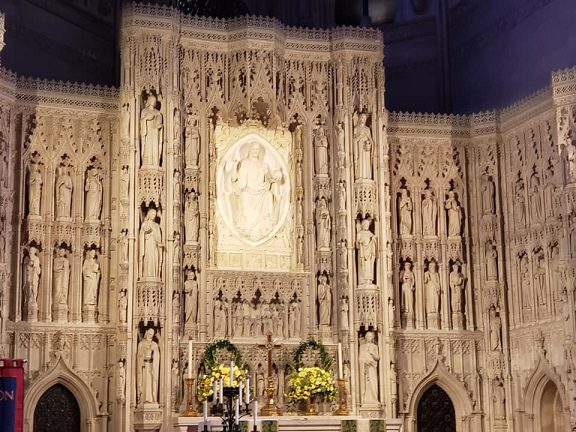 God of Resurrection, may we not forget those who have died in the gun violence that we have allowed to become routine. Receive them into your heart and comfort us with your promise of eternal love and care. For all who have died at the shootings in El Paso and Dayton, those who die today, and those who will die tomorrow, Loving God, Make us instruments of your peace.

Followed by this companion prayer:

God of Justice, help us, your church, find our voice. Empower us to change this broken world and to protest the needless deaths caused by gun violence. Give us power to rise above our fear that nothing can be done and grant us the conviction to advocate for change. For your dream of love and harmony, Loving God, Make us instruments of your peace.

Only the coldest and most heartless among us do not wish for there to be less gun violence in this country, but the second prayer hits my particular nail on the head. “Give us power to rise above our fear that nothing can be done.”

I would like to believe that the violence and racism that has become routine in our country is an aberration that does not reflect our basic goodness and decency. I would like to believe that “this is not who we are” and that “we are better than this.” But violence and racism have been part of the fabric of this country since its inception. Of the many commentaries I have listened to over the past several days on the latest mass shootings, the most profound—and disturbing for people such as I—came from Professor Eddie Glaude of Princeton University.

Glaude notes that we in this nation are not unique in our sins or evils. Where we may be unique, he continues, “is in our refusal to acknowledge them, and in the legends and myths we tell about our inherent goodness.” He continues by pointing out that we have played politics with race for a long time; currently, it is easy for us to avoid culpability by placing the blame on Donald Trump and his hard-core supporters. But, Glaude insists emphatically, “This is us. And if we are going to get past this, we can’t blame it on him. He’s a manifestation of the ugliness that’s in us . . . Either we are going to change, or we are going to do this again . . . and again . . . and again.”

Ever since the founding fathers of our nation dreamed this dream, America has manifested a schizophrenic personality. She has been torn between {two} selves–a self in which she has proudly professed democracy and a self in which she has sadly practiced the antithesis of democracy. Slavery and segregation have been strange paradoxes in a nation founded on the principle that all men are created equal.

We lie to ourselves when we respond to gun violence, racism, and all of the other obvious evils that plague our country by saying that “this is not who we are.” In truth, this is exactly who we are. We will not be able to become better until we admit it.

The day after my pilgrimage to the National Cathedral, Jeanne and I spent a couple of hours at the American Holocaust Museum. The experience was as disturbing and sobering as I expected it would be. Because I have frequently taught a colloquium called “Grace, Truth, and Freedom in the Nazi Era” with a colleague from the history department, I am well-versed in the history, literature, and politics of that time.

I am not anxious in this essay to draw the obvious parallels between Germany in the 1930s and where we find ourselves in this country today. There are many important differences, but we should not fool ourselves. We are not better than the Germans of the 1930s. Nationalism and tribalism are more natural to human beings than living out the ideals of equality, fairness, and justice that we supposedly aspire to.

Each of us has to decide what it will take to rise above what we are and start becoming what we claim to be. It will take a lot of difficult work, tasks much more difficult than telling ourselves consoling stories. A good place to start is to be brutally honest with ourselves about where we come from and where we currently are. This sentiment from Deuteronomy, etched in glass in the room of remembrance that is the final stop in the Holocaust Museum, is a good place to start:

Only guard yourself and guard your soul carefully, lest you forget the things your eyes saw, and lest these things depart your heart all the days of your life. And you shall make them known to your children, and to your children’s children. 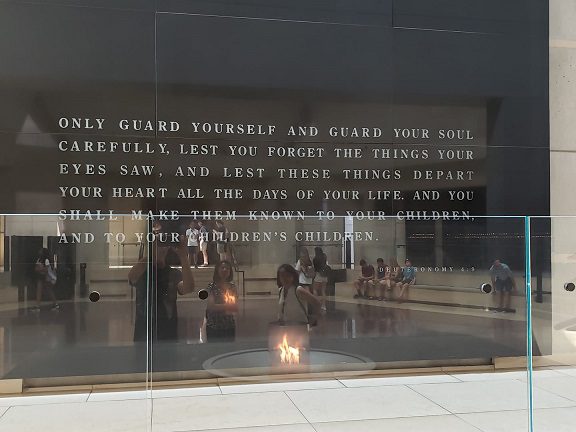 January 19, 2020
American Airlines 4395, Bombing Raids Over Germany, and a Spark of the Divine
Next Post

January 21, 2020 As the Impeachment Trial Begins, Don't Forget to Think--Even When It's Hard
Recent Comments
0 | Leave a Comment
Browse Our Archives
get the latest from
Freelance Christianity
Sign up for our newsletter
POPULAR AT PATHEOS Progressive Christian
1