A Foreign Widow, Seduction, and the Book of Ruth

A Foreign Widow, Seduction, and the Book of Ruth November 13, 2018 vancemorgan

One of my favorite features of liturgical worship is encountering familiar and favorite texts during the lectionary cycle. One recent Sunday, for instance, I read as lector from Proverbs, a selection that included the verses that I used to dedicate my first published book to my mother: “She opens her mouth with wisdom . . . her children rise up and call her blessed.” The assigned Psalm last Sunday was Psalm 127, which includes the passage I used when dedicating my second book to my sons: “Sons are indeed a heritage from the Lord . . . Like arrows in the hand of a warrior are the sons of one’s youth.” Such lovely, unexpected confluences are for me continuing proof that once in a while what’s greater than us takes notice of little old me. I stopped labeling events as “chance occurrences” a long time ago.

As if that wasn’t enough, last Sunday’s first reading was from one of my favorite books, a little, seldom read gem dropped into the Hebrew Scriptures between the historical books of Judges and First Samuel. I always assign the Book of Ruth when we are in Old Testament week in the interdisciplinary program I teach in for several reasons. First, it is brief enough to be read in one setting and I can safely assume that the majority of students in the class will actually read it. More importantly, it is unique among the books of the Old Testament in that women are the main characters and God never makes an appearance. No miracles, no divine insecurity or meddling with the lives of human beings. Ruth is a story of normal human beings trying to live their lives with integrity and care in a middle of a world that is both challenging and unfair. Sounds a lot like the world we live in.

The Book of Ruth is set during the decades between the children of Israel’s occupation of the Promised Land recounted in Joshua and the events leading up to the kingship of Saul and David recounted in First Samuel. The interim period described in Judges is a time of political fluidity during which the various tribes of Israel, in very loose confederation, stake out territory and frequently have to defend themselves against attacks from various indigenous groups they had displaced. One of these groups is Moab, to the southeast of the land occupied by the Israelite tribes. The Book of Ruth is set during the time covered in Judges, and tells a story that is as contemporary as the caravan headed northward toward our southern border—it’s a story of people migrating from their native land in search of better lives.

An Israelite family from the tribe of Benjamin during a time of famine migrates to Moab due to rumors that there is food there. At first things work out reasonably well for Naomi and her family; even though it is a violation of Jewish law described in the Pentateuch for an Israelite to marry a non-Israelite, Naomi’s sons marry Moabite women—Ruth and Orpah. But then disaster strikes—both of Naomi’s sons and her husband die of disease and she finds herself a widow with two widowed non-Jewish daughters-in-law. In a strongly patriarchal world, what options are available for a husband-less middle-aged woman?

Naomi advises her daughters-in-law to return to their families while she, her life in many respects over as an older woman with no male to protect her, will return to her own homeland. Orpah sadly does so, but Ruth refuses to leave. In the best-known passage from the book, Ruth tells Naomi “Where you go, I will go; where you lodge, I will lodge; your people shall be my people, and your God my God.” For many years, a musical setting of this text was standard fare at wedding ceremonies; very few were aware that these words are not about the love between a man and a woman committing themselves to each other, but rather are the expression of a young woman’s love for an older woman whom she cannot bear to leave, even for the best of reasons.

Back in her homeland, Naomi relies on her considerable intelligence and powers of manipulation to worm her way into the orbit of Boaz, a relative of her deceased husband, on whose support she has a distant claim according to the law. Wisely she uses the youthful and beautiful foreigner Ruth to draw Boaz’s attention, first as Ruth works in his fields, then in the following passage that was the first reading last Sunday:

Naomi her mother-in-law said to her, “My daughter, I need to seek some security for you, so that it may be well with you.  Now here is our kinsman Boaz, with whose young women you have been working. See, he is winnowing barley tonight at the threshing floor.  Now wash and anoint yourself, and put on your best clothes and go down to the threshing floor; but do not make yourself known to the man until he has finished eating and drinking.When he lies down, observe the place where he lies; then, go and uncover his feet and lie down; and he will tell you what to do.”

An odd passage to read from a church lectern. I have heard many ministers fumble around with this portion of the story, but my eighteen year old freshmen know exactly what’s going on. Naomi is telling Ruth to seduce Boaz. And it works—Boaz does tell Ruth “what to do,” they soon marry, and their son, Jesse, is the father of David, the shepherd who becomes king and whose descendant will be Jesus himself.

A few takeaways from Ruth’s story: 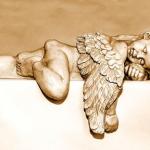