You can either think of the creeds of the great traditions . . . as telling you what you ought to think. Or you can say they are in some sense comparable to the theories of science. Lindon Eaves

Two or three years ago, Harvard political philosopher and professor of government Danielle Allen gave a talk on campus as part of my college’s year-long centennial celebration. I was fortunate enough to be invited to join ten or so faculty and administrators at the President’s house for dinner after the talk. Allen’s most recent book is Our Declaration: A Reading of the Declaration of Independence in Defense of Equality; her talk and the conversation at dinner were so good that I ordered a copy from Amazon that night. It’s terrific, so good that it should be required reading for all American citizens, starting with the outgoing President (a bit late for that, I suspect).  But my first “aha!” moment while reading the book had nothing to do with politics or citizenship—it was sparked by the reference to “Nature and Nature’s God” in the first sentence of the Declaration of Independence. “Wow,” I thought. “That’s what my Honors colloquium is about.” 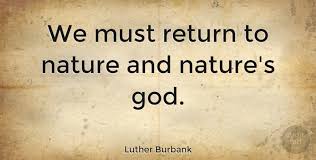 About once every three years I have the opportunity to teach a capstone colloquium for juniors and seniors in our Liberal Arts Honors Program. The semester that Danielle Allen visited, I was teaching “Beauty and Violence: The Problem of Natural Evil,” for the third time, a class that I have come to consider as my “signature course” (and that I will be teaching again next year). My fourteen students reflected the eclectic nature of the texts we studied, with four Accounting majors, two in Biology, two in Sociology, two in Education, and one each in Finance, Marketing, Biochemistry, and Engineering/Physical Systems.

“Mostly left-brain people,” Jeanne observed. No humanities majors, in a course taught by a philosopher who over the years has morphed into more of an interdisciplinary humanities professor than anything else. We considered texts by theologians, biologists, philosophers, novelists, and a couple of people who cannot be categorized, with a Jesuit paleontologist, a Benedictine nun, and an Anglican physicist thrown in for good measure. My kind of course, in other words—I had a ball, and the students (per their comments in class and on discussion forums) had their minds blown. Our connecting theme, as the Declaration’s phrase states, was “Nature and Nature’s God.” From careful observation of the natural world, what might we intelligently speculate concerning what or who put it in place?

Our initial three weeks were spent with reading several essays by Annie Dillard, then her brilliant Pilgrim at Tinker Creek in its entirety. Dillard models the energy and curiosity that I seek to cultivate in this course. As she records her detailed observations of the natural world in all its beauty and violence, then uses them as a springboard for intense and irreverent questions shot heavenward, 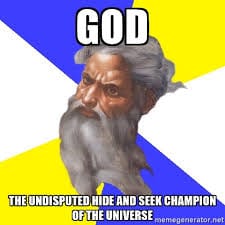 I am reminded of a verse from Proverbs in the Jewish Scriptures: “It is the glory of God to conceal a thing, and the glory of kings to search it out.” This hide-and-seek game, with the divine hiding after leaving cryptic clues behind, and we mortals trying to figure out what they point toward, is Dillard’s continuing obsession.

What have we been trying to do all these centuries but trying to call God back to the mountain, or, failing that, raise a peep out of anything that isn’t us? What is the difference between a cathedral and a physics lab? Are they not both saying: Hello?

Dillard once described liturgy as a set of words and practices that human beings over the years have managed to direct toward God without getting killed. Is science a similar sort of activity, attempting to get a glimpse of the most elusive of prey? Many, probably most, scientists would say that questions of what lies behind the natural world are not within their purview—their task is to figure out what is the case, not why it is the case. But one does not have to look too far to find scientists who think otherwise.

One of my favorite sources of conversations with persons who have spent their lives getting science and faith to talk to each other is Krista Tippett’s public radio program “On Being.” For instance, geneticist and Anglican priest Lindon Eaves describes how although he needs to separate his inner scientist and priest at times, he often notes just how close the energies of his two life-defining activities are.

To be a thorough-going scientist I am compelled in the short term to see really good reasons for not believing the current model for reality because that’s how science perceives . . . You can either think of, let’s say the creeds of the great traditions as it were, as telling you what you ought to think. Or you can say they are in some sense comparable to the theories of science. They are the best distillations of where we’ve been. But we don’t approach reality treating those models as if they are the last word. We treat them as operational hypotheses.

The creeds of the faith as operational hypotheses, our current best shot at what might be appropriate to believe about God? Both science and faith at their best establish that any conviction worth its salt must cohabit with a piece of mystery. All of our traditions insist on a reverence for what we do not know now and cannot tie up with explanations in this lifetime.

In a different conversation, Vatican observatory astronomer Fr. George Coyne tells the story of how, during the question and answer period after he gave a conference paper on the uncertainties of determining the age of the universe, an audience member commented, “Father, it must be wonderful that, with all the uncertainties we have in our scientific pursuits, that you have this faith, this rock of faith to stand upon.” Father Coyne was not amused.

I took off my Roman collar and faced him down and said, “Who told you that my faith was kind of a rock?” I said, “Every morning I wake up I have my doubts. I have my uncertainties. I have to struggle to help my faith grow.” Because faith is love. Love in marriage, love with friends, love of brothers and sisters is not something that’s there once and for all and always kind of a rock that gives us support. What I want to say is, ignorance in doing science creates the excitement of doing science, and anyone who does it knows that discoveries lead to a further ignorance.

Ignorance and doubt are wonderful places to be as we turn our attention toward the unknown. As Rabbi Jonathan Sacks told Krista Tippett, “Whatever God is, he is not as simple as we are. He is in places you would never expect him to be . . . Don’t think we can confine God into our categories. God is bigger than religion.” And than science, I might add.

One of the late Harvard biologist Stephen Jay Gould’s last books was Rocks of Ages, in which he argued that religion/faith and science should be treated as “non-overlapping magisteria,” equally important areas of human endeavor and belief that operate according to entirely different principles and, therefore, should not be allowed to talk to each other. At the beginning of the book, Gould favorably quotes the old cliché that “science gets the age of rocks, and religion gets the Rock of Ages.” With all due respect, Gould is wrong. Charles Sanders Peirce once wrote that the point of investigation is to find out something we don’t know by using those things that we do know. When the stakes are the highest, when the object of investigation is what is greater than us, all of our best human tools are appropriate for use. 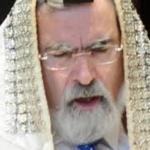 November 24, 2020 Christianity Does Not Solve the Problem of Evil
Recent Comments
0 | Leave a Comment
"forgiveness is earned imo."
Brandon Roberts To Pardon is Human, but to ..."
"Hi Vance, I agree and rejected #3 after a lot of prayer, research, including Bible ..."
James Goetz Christianity Does Not Solve the Problem ..."
"interesting."
Brandon Roberts I Don’t Know. I was Wrong. ..."
"On Jesus being aware of his divinity: when i first concluded that he did not ..."
madalyn baumstark I Don’t Know. I was Wrong. ..."
Browse Our Archives
get the latest from
Freelance Christianity
Sign up for our newsletter
POPULAR AT PATHEOS Progressive Christian
1