Lifting the Fog from Faith

What we call doubt is often simply dullness of mind and spirit, not the absence of faith at all, but faith latent in the lives we are not quite living, God dormant in the world to which we are not quite giving our best selves.  Christopher Wiman

One of my birthday presents earlier this week from Jeanne was a new super-duper Keurig coffee machine that, among other amazing abilities, can make cappuccinos and lattes. Before last summer, I don’t believe that either of us had ever purchased a cappuccino. But when on vacation in Scotland last summer, we began drinking them simply because the Scottish version of “Caffe Americano” was so horrible. Over the subsequent months cappuccinos have become more and more of a regular fixture, especially since we found a coffee shop in the neighborhood that makes them to die for. “Large cappuccino with almond milk, shot of sugar-free peanut butter.” Really. Jeanne realized that the money saved by making such concoctions at home rather than $5 at a time elsewhere would pay for the new Keurig within a month or so. 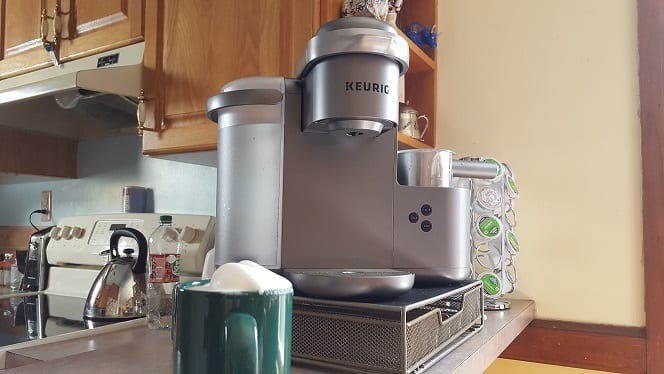 One day not long ago, while at the grocery store, I was surveying the vast array of Keurig coffee possibilities on display. Among the offerings was something from a San Francisco based company called “Fog Chaser.” I immediately moved to the next possibility, assuming that “Fog Chaser” would something like Starbucks on steroids—West Coast people like coffee that will make your hair stand on end. Several years ago while at a conference in Berkeley, CA, Jeanne and I wandered the town’s main street looking for coffee that our New England Dunkin’ Donuts tastes could handle. Knowing from experience that both of us hate headache-producing Starbucks products, we stepped into a little coffee shop and asked “Is your coffee as strong as Starbucks?” “Hell, no!” we were told, “Our coffee is much stronger than Starbucks!” No coffee for us that morning until the institutional fare at the conference. And no “Fog Chaser” for me.

The name reminded me of Nobel Prize winner Kazuo Ishiguro’s 2015 novel, The Buried Giant. Ishiguro’s work is brilliant, creative, and mesmerizing, but this one was not one of my favorites, certainly not as good as The Remains of the Day or Never Let Me Go (which I am using as the basis for the final paper assignment in one of my classes this semester). But it was good enough to stay with, and—a sure sign of a novel worth reading—I’m still thinking about it.

The Buried Giant is set in post-Roman, pre-Norman conquest England, a generation after the already mythical King Arthur and Merlin. We find through Axl and Beatrice, an old married couple at the center of the narrative, that a strange amnesia lays over the land. Axl and Beatrice clearly still love each other several decades into their relationship, but they remember only bits and pieces of their past history. They have a son, but they don’t remember why he left home years ago nor do they know where he went. They know there have been some problematic events in their years together, but can’t clearly remember what these things are. And this memory malaise is not just what one might expect from a couple of people in their seventies—it afflicts everyone.

Without revealing too much of the story, it turns out that the collective amnesia is the work of the dragon Querig, lurking behind the scenes and driving the action throughout. The old couple’s wanderings as they try to find their son intersect with two knights, both claiming to be on a mission concerning the dragon with clearly conflicting intentions. The very breath of the dragon causes people to forget, to lose their memories—slaying Querig will remove this dragon-fog and restore the land to memory health. Yet, as usual, it isn’t that simple.

Years earlier, Britain had been afflicted with civil war between the native Britons and the newcomer Saxons, a war with King Arthur and the wizard Merlin at the center. Peace came to the land when the dragon, empowered with Merlin’s magic, just by its breathing existence caused the warring factions to forget why they were fighting. Fast-forward several decades to the time of the novel, and the land lays under a dreamlike trance having forgotten most of the past.

But not everything has been forgotten. Wistan, one of two knights Axl and Beatrice meet in their wanderings, is on a mission from a neighboring warlord to slay Querig. The mission of the other knight, the aging Gawain from King Arthur’s court, is only revealed toward the end of the story—his mission is to protect the dragon. As long as Querig lives, the land will be at peace. But with peace comes a price—loss of memory, tradition, and identity. What price is worth paying for peace? What things are worth sacrificing one’s identity for? These questions and many others are at the heart of Ishiguro’s work.

Since finishing The Buried Giant, I’ve often thought about the various ways in which I am tempted, as I suspect everyone is tempted, to live in a self-induced fog. Living in a fog is not the same as sleepwalking; rather, it is living with only partial awareness of one’s surroundings and fellow human beings, even of one’s own beliefs and commitments. I find that one of my main tasks as a professor is to provide students with some fog-lifting guidance and tools.

For instance, such tools are useful in making one’s beliefs cohere. Constructing a coherent set of beliefs is not like a trip through the cafeteria line, where everything goes with everything else. What one believes concerning God’s existence and nature should shed light on other things one chooses to believe. The position one takes on the dignity and value of human life should both illuminate and limit what one can believe concerning a host of other issues. To succumb to the temptations of compartmentalization is to choose a fog-enveloped existence in which one wanders from one commitment to the next with no awareness that these commitments are united in one human being.

A few years ago, NBC ran A.D., a multi-week miniseries event about what happened to the early followers of Jesus after he headed home. In spite of the multiple liberties taken with the story, A.D. captured one thing very well—the challenges of and the dangers involved with keeping belief alive after the original inspirations are long gone. Those of us who seek to live out faiths with ancient roots in the contemporary world continue to grapple with these challenges. But as Christian Wiman reminds us, a self-induced fog often makes the challenges even more difficult.

Just as some of Jesus’ first century followers could not credit the presence of the risen Christ, so our own blindness, habit, and fear form a kind of constant fog that keeps us from seeing, and thereby believing in, the forms that grace takes in our everyday lives. . . . In fact the world is erupting around us, Christ is very often offering us the scars in his side. What we call doubt is often simply dullness of mind and spirit, not the absence of faith at all, but faith latent in the lives we are not quite living, God dormant in the world to which we are not quite giving our best selves.

The most effective fog chaser is to focus on something specific, something real, something that isn’t you—like the person right in front of you. As Barbara Brown Taylor writes,

The hardest spiritual work in the world is to love the neighbor as the self—to encounter another human being not as someone you can use, change, fix, help, save, enroll, convince or control, but simply as someone who can spring you from the prison of yourself, if you will allow it.

March 8, 2019
Lent is a Time for Loving Yourself
Next Post 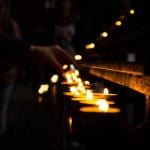