Complicated Truths and the Challenge of Being Good

Complicated Truths and the Challenge of Being Good March 26, 2019 vancemorgan

Once many years ago, a couple I was close friends with was having marital problems. For the first (and only) time in my life, I found myself frequently playing the role of telephone confessor and therapist for each of them—I’m quite sure that neither was aware that I was doing this with the other. The phone calls became so frequent that one evening as I talked to the male in the relationship, the woman beeped in on call waiting. Toward the end of their relationship, she complained to me one evening that “There is no problem so great that he can’t ignore it!” These informal therapy sessions were unsuccessful; the couple soon divorced, one of them remarried, and both seem to have spent the past twenty-five years far happier than they were when together. Maybe that means my input was successful after all. 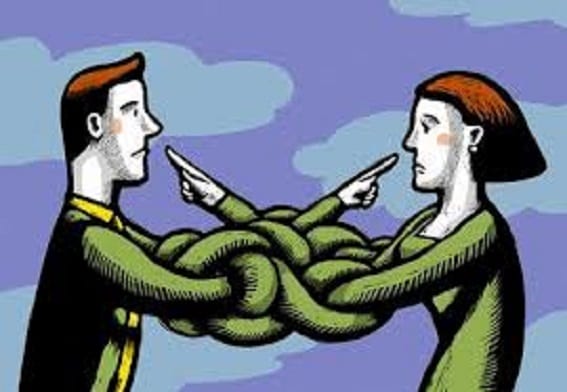 My friend’s complaint about her husband was, unfortunately, all too recognizable as a typical human reaction to information or truths that we don’t want to hear. In the Gospel of John, Jesus is reported as having said “You will know the truth, and the truth will set you free.” I don’t think so. I think the real situation is more like what one of my students wrote in a recent intellectual notebook entry: “The truth doesn’t set a person free, but it does complicate their life.” So what is one to do when the truth about something is so obvious that it cannot be ignored—and you don’t want to deal with it?

Along with a colleague from the history department, I am currently teaching a colloquium entitled “‘Love Never Fails’: Grace, Freedom, and Truth during the Nazi Era.” After several weeks of immersion in the world of the Nazis, including Mein Kampf and Albert Speer’s Inside the Third Reich, I could tell that everyone was feeling the same way I was—worn out by exposure to human pain, suffering, and evil and how these are facilitated by deliberate ignorance and evasion created through the choices we make.

Then this past week, we returned from Spring Break to a different sort of story altogether: Philip Hallie’s Lest Innocent Blood Be Shed. 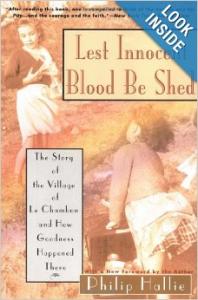 The subtitle of Hallie’s remarkable book is “The Story of the Village of Le Chambon and How Goodness Happened There.” It is, in many ways, more challenging and disturbing than being immersed in the depths of human depravity.

Hallie’s book is the little-known story of Le Chambon-sur-Lignon, a small and insignificant Protestant village in south-central France that, during the later years of World War II, “became the safest place for Jews in Europe.” Between 1940 and 1943, the villagers of Le Chambon, with full knowledge of the Vichy police and the Gestapo, and at great risk to their own safety and lives, organized a complex network of protection through which they hid and saved the lives of at least five thousand Jewish refugees—most of them women and children.

As a woman whose three children’s lives were saved by these villagers told Philip Hallie decades later, “The Holocaust was storm, lightning, thunder, wind, rain—and Le Chambon was the rainbow.” Hallie comments that “The rainbow reminds God and man that life is precious to God, that God offers not only sentimental hope, but a promise that living will have the last word, not killing. The rainbow means realistic hope,” a hope that was incarnated in Le Chambon.

It is a beautiful story, one that is virtually unknown in comparison to more familiar and dramatic narratives. Everyone who cares about the human spirit should read it—I dare you to make it through with dry eyes. My first question to the thirty-some students in the colloquium at our first class on this text yesterday was simply “How did this happen?” There is nothing special about Le Chambon—there are hundreds of similar rural villages throughout Europe. 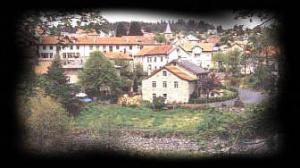 There were dozens of them within a short train ride of Le Chambon. Yet none of them did anything like what the Chambonnais did; indeed, many of them collaborated with the Vichy police and turned their Jewish neighbors and Jewish refugees in to the authorities as the occupying Nazis demanded. What made Le Chambon different? How did goodness happen here?

According to the Chambonnais in virtually every interview Hallie conducted, there was nothing special about what they did at all. After being described as a “hero” or simply as “good,” Magda Trocmé, wife of the village’s dynamic pastor André Trocmé, asked in annoyance

How can you call us ‘good’? We were doing what had to be done. Who else could help them? And what has all this to do with goodness? Things had to be done, that’s all, and we happened to be there to do them. You must understand that it was the most natural thing in the world to help these people. Who else would have taken care of them if we didn’t? They needed our help and they needed it then. Anyone else would have done the same thing.

“Is she right?” I asked my students? “How many think anyone else would have done the same?” Not a hand was raised—certainly not mine. So the question remains. How did this happen? How did goodness happen here? According to Hallie, the most important reason that goodness happened in Le Chambon is so simple and basic that it cannot be overlooked.

The Chambonnais believed one fundamental thing concerning human beings—that all human life, whether French, Jewish, or Nazi, is fundamentally precious and must not be harmed. Period. Many people, then and now, profess to believe this; the Chambonnais not only believed it—they acted on it. Consistently and regularly. Without questioning or equivocation. For such people, Hallie describes, “The good of others becomes a thing naturally and necessarily attended to, like any of the physical conditions of our existence. For certain people, helping the distressed is as natural and necessary as feeding themselves.” The villagers of Le Chambon were such people.

The source of this simple but powerful lived commitment depended on the person. For Pastor André Trocmé, on the one hand, his commitment to nonviolence and active goodness was rooted in his commitment to emulate Jesus and to take seriously, in a remarkably straightforward way, the message of the gospel. During his theological training, for instance, he was taught by his professors that the Sermon on the Mount is intended to be read as an allegory or as a standard set impossibly high so we can understand our sins and failures more clearly. André had no patience for such evasions. In a book written shortly after the end of the war, he asks

André’s wife Magda, on the other hand, had no patience for doctrine, religion, or any esoteric debate that might take her attention away from what was right in front of her. She did not believe that something was evil because it violated God’s commands. She believed that something is evil simply because it hurts people. A person’s need was the basis of her moral vision, not any sentimental love she might or might not feel for the person in need, and certainly not any calling to moral or religious excellence. There is a need and I will address it was her motivating energy. Simple as that.

I have taught this book a number of times; as I worked through the story with my students last week, I realized with a new depth just how disturbing and shocking the story of Le Chambon is. “These people make me uncomfortable,” I told the students. “They let me know just how wide a gap there is between what I say I believe and what I actually do.” When the truth of what I profess is laid out in front of me in a way that I cannot ignore, I want to look away. I shift into philosopher mode—“This is idealistic, this won’t work in real life, real human beings won’t treat each other this way,” and so on.

My students would have been very happy to be told all of this, because they were just as uncomfortable with the Chambonnais as I was and am. But goodness did happen there in the midst of some of the worst evil humans have ever manufactured. Real people created goodness in the midst of evil by actually taking what they believed seriously enough to do it. The best I can do is to make Hallie’s closing words in Lest Innocent Blood Be Shed my own and invite my students to come along.

I, who share Trocme’s and the Chambonnais’ beliefs in the  preciousness of human life, may never have the moral strength to be much like the Chambonnais or like Trocmé; but I know I want to have the power to be. I know that I want to have a door in the depths of my being, a door that is not locked against the faces of all other human beings. I know that I want to be able to say, from the depths, “Naturally, come in, and come in.” 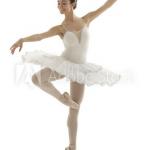 March 24, 2019
Oysters, Ballerinas, and a Reminder that No One Owns God
Next Post 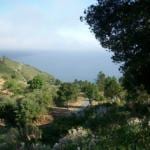 March 27, 2019 What Goes Down . . . Must Come Back Up
Recent Comments
0 | Leave a Comment
Browse Our Archives
get the latest from
Freelance Christianity
Sign up for our newsletter
POPULAR AT PATHEOS Progressive Christian
1 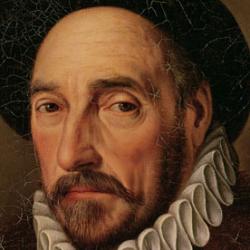