Do You Love Your Life?

Although I read all the time–I once told my ophthalmologist that that I read for a living–I seldom read any book that I’m not teaching out of more than once. So, it is unusual that I am currently reading Stephanie Saldana’s The Bread of Angels for the third time in the past few years. It is a book that was very meaningful to Jeanne and me a few years ago, so meaningful that she gave our copy of it to a friend who never returned it. Not long ago, Jeanne mentioned that she would like to read it again, it arrived from Amazon two days later, and Jeanne devoured it once again. Looking for something different to read for the first few days of spring break, I picked the book up from Jeanne’s nightstand a couple of days ago and started reading. It’s a truly beautiful book, and particularly fitting for Lent.

The very appropriate subtitle of The Bread of Angels is “A Journey to Love and Faith,” described on the flyleaf of the hardback edition as “the unforgettable memoir of one woman’s search for faith, love, and the meaning of her life in the place she least expects to find it.” In the Fall of 2004, after several years as a journalist and finishing a Master’s degree in Religious Studies at Harvard, Stephanie Saldana traveled to Syria on a year-long Fulbright scholarship to study Arabic. She is a restless wanderer, seeking God, relationship and professional happiness, while at the same time running from a dark family history and her latest failed relationship. 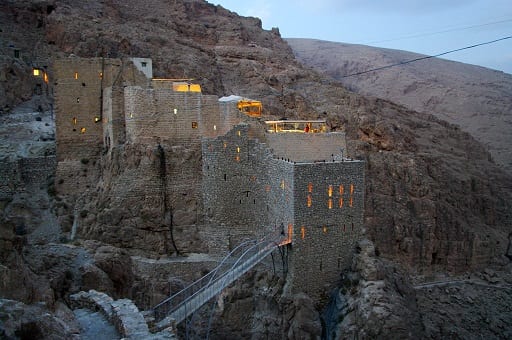 Saldana’s story is both poignant and inspirational—I won’t spoil much of it for you. Of particular interest in the first half of her memoir is her visit to Deir Mar Musa, a monastery of the Syriac Catholic rite in west-central Syria. Stephanie had visited this ancient monastery, literally carved out of rocky cliffs in the desert, during a previous trip to the Middle East; during Advent of 2004 she travelled to Mar Musa from Damascus for an intense, several week-long retreat shaped by the rigorous “Spiritual Exercises” of Ignatius of Loyola, the training manual for the Jesuits.

At the end of her retreat, Stephanie was convinced that she was called to become a nun at this monastery upon her return from visiting her family in Texas for the Christmas holidays. But her trip to the US confused her, shook her resolve, and upon returning to Syria and the monastery in the New Year she informs the abbot that she is no longer certain of her decision to enter holy orders. During a conversation with Frederic, a young novice monk from France, Stephanie shares her uncertainty. In response, Frederic says “Stephanie, you know, I never really thought that you should become a nun.” Hurt, Stephanie wants to know why? “Because you don’t believe in the resurrection,” Frederic replies. “You don’t love your life.”

I am much more of a marker of my books than Jeanne, but in the margin next to “You don’t believe in the resurrection . . . you don’t love your life,” Jeanne wrote “WOW” in big capital letters. Putting loving one’s life and resurrection into the same sentence, let alone implying that they are roughly the same thing, is unusual to say the least. In the gospels, Jesus tells various people who want to follow him that unless they are willing to leave their lives entirely behind, they cannot be his true disciple, and in John’s gospel Jesus says that “he who loves his life will lose it, but he hates his life will find it.”

And then there’s the story of a landowner whose fields are so fruitful that he has to tear down his barns and build larger ones in order to create room for “all my grain and my goods.” A first century success story, in other words. Nothing wrong with  being successful, I suppose, but then the guy says to himself “You have ample goods laid up for many years; relax, eat, drink, be merry.” To which God replies, “You fool! This very night your life is being demanded of you. And the things you have prepared, whose will they be?”

Well, we certainly saw that one coming. If there’s anything that is clear from Jesus’s stories and teaching, it is that God does not like complacency, smugness, or self-satisfaction. With God, one is never “all set” (as Rhode Islanders like to say). The rich landowner had built a life that, by most human standards, was one to be envied and admired. He probably “loved his life.” And look what happened to him. He is a perfect illustration of what Jesus tells his disciples on another occasion—it is easier for a camel to go through the eye of a needle than for a rich person to enter the kingdom of God.

Which makes Frederic’s equating believing in the resurrection with loving one’s life all the more difficult to understand. Stephanie is a bit offended, more than a little confused, and takes his cryptic challenge with her from the monastic mountain into her real life in Damascus. Strangely, the project of learning Arabic—the supposed reason for Stephanie’s being in Syria in the first place—begins to take on an entirely new form. The vocabulary she has learned from her studies thus far—“disciples,” “Lamb of God,” “salvation,” and the like—are of little use in the marketplace. Upon her return from the monastery, she decides to walk the streets instead of going to class, learning the words for “drinking straw,” “knife,” “afternoon,” “carrot,” colloquial phrases that everyone uses but that are never in a text-book, and how to swear like an Arabic longshoreman. Stephanie, in other words, starts learning Arabic rather than learning about it. She is living the language rather than taking vocabulary quizzes—her first lesson in living her life rather than studying about it as if it were something separate from her.

And this is what Frederic had in mind when he said that only someone who loves her or his life truly believes in the resurrection. Because the whole point of the resurrection, Jesus’s conquering of death, was to make it possible for the divine to be embedded in our daily lives. Living a life of faith has little or nothing to do with learning the correct vocabulary, the canonical phrases, the accepted rituals. It rather has to do with infusing the daily with the divine that is the gift in us.

The rich landowner’s mistake was not that he was successful and rich. It was not even that he was happy with his life. It was rather than he loved the wrong things about his life—his money and his apparent security. In the divine economy, success is measured by the extent to which I am willing to bring God into each corner of my life, even the dark and neglected ones, and learn to love and celebrate my life because God is an inextricably intimate part of it. As Frederic tells Stephanie on another occasion concerning her choice to follow Christ: “Your choice doesn’t mean anything until it becomes incarnate, until you take it back into the world.” 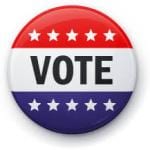 March 8, 2020
God Is Not Choosing the Next President--We Are
Next Post 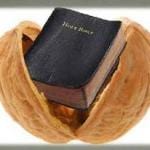 March 11, 2020 The Gospel in a Nutshell
Recent Comments
0 | Leave a Comment
Browse Our Archives
get the latest from
Freelance Christianity
Sign up for our newsletter
POPULAR AT PATHEOS Progressive Christian
1