I currently am working my way slowly through Walter Isaacson’s wonderful biography of Leonardo da Vinci. One of the many fascinating things about Leonardo is that he does not fit the model of a solitary and tortured genius. So far, at least (I’ve got him up to his middle thirties), Leonardo appears to have been an extroverted “people person” who loved bouncing ideas off other creative people, the sorts of folks he surrounded himself with in his studio and travelling entourage. Commenting on this, Isaacson notes that

Unlike Michelangelo and some other anguished artists, Leonardo enjoyed being surrounded by friends, companions, students, assistants, fellow courtiers, and thinkers . . . Ideas are often generated in physical gathering places where people with diverse interests encounter one another serendipitously . . . Leonardo found friends who could spark new ideas by rubbing together their diverse passions.

I must confess that by temperament I am more like Michelangelo than Leonardo (the introverted part, not the “anguished” part). I’m engaged with people all the time, but I do my best creative work, initially at least, alone rather than collaboratively. But I’m always fascinated by how various sorts of spaces feed the intellectual and creative life; I’ve found that my own most productive spaces are often not found where I might expect. Sometimes they turn into sacred spaces.

I went on retreat just before the beginning of this new semester in search of sacred spaces, both internal and external. I’ve learned over the past several years that I carry my most reliable sacred space inside me wherever I go, the place Catherine of Genoa was referring to when she said that “my deepest me is God.” But full access to this space sometimes requires finding appropriate external spaces as well—a well-appointed book room, a coffee shop, a comfortable office—as I seek to remove accumulated rubble from the doorway to my inner sanctum.

An obvious “go to” place for such external spaces is a church; hence, my choice for retreat was a small Benedictine abbey an hour or so north in Massachusetts. I showed up in sub-zero temperatures that arrived in the aftermath of our first snow storm of the winter. The abbey chapel was small and very Catholic. It soon became clear that if I was going to find an effective sacred space this weekend, the chapel wasn’t it. The liturgies did not do anything for me. I much preferred seeing the monks in between shifts in the chapel dressed in comfortable sweaters and snow up to the knees of their flannel-lined and well-worn dungarees, proof that they had been doing something more embodied and earthly than chanting in Latin.

When on self-directed silent retreat, one should not be thinking about basketball games. But on Saturday, my first full day at the abbey, the Providence College Friars men’s team was playing the #5 team in the country at home in the very arena where I have had two season tickets for the past twenty-three years. I have missed only a handful of home games in those years, so my reluctant choice to miss the biggest game of the year so far shows just how badly I needed my retreat. 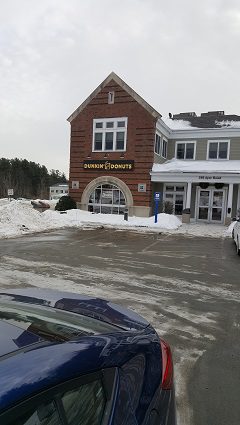 But my need for silence and sacredness did not stop me from figuring out where I might find some public place with WiFi (the abbey didn’t have WiFi) on Saturday afternoon so I could watch the game on my tablet online. Knowing that in southern New England one is always just around the corner from a Dunkin’ Donuts (and they always have free WiFi), I did a search on my smart phone and, sure enough, found four DD’s within five miles of the abbey. I picked one, and ventured into the cold.

Upon arrival, I purchased a coffee and set up in a corner with a comfortable chair. I was able to watch the game uninterrupted (we won!) because the place was pretty much empty throughout my stay. I was one of the few people in the area that afternoon motivated enough to go out in the cold—being a college basketball junkie will do that to you. During half time I read a bit and chatted with the young employee with multiple tattoos and piercings whose job it was to keep the floor clean, which meant mopping it every time after a customer came and went, since each person tracked the salt that was melting the snow and ice in the parking lot into his place of business. “Tough day for that job,” I commented. “Tell me about it, dude,” he responded.

That evening as I read while huddled under a blanket for warmth in my little room back at the abbey, it dawned on me that I had found a new sacred space. I had felt much more at home in that Dunkin’ Donuts than in any space I had yet found at the abbey. Trusting my intuition, I returned to the DD both Sunday and Monday mornings, each time with several books and my tablet in case I wanted to write. 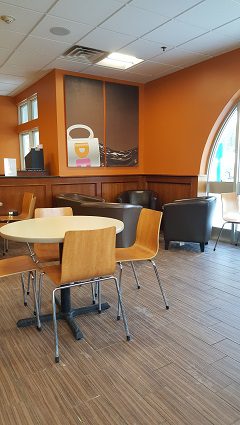 I read, I wrote, I read some more, I wrote some more—I legitimized my three hour stay each morning by purchasing something every forty-five minutes or so. The employees were friendly and left me alone—exactly what I wanted and needed. It was a successful retreat; I returned home with three new completed essays, three Barbara Brown Taylor books read from cover to cover, and ready to jump into a challenging semester.

Upon reflection, I realize that finding my sacred retreat space in a Dunkin’ Donuts should not have surprised me. I do a great deal of my best class preparation on campus in the atrium of our student center, sitting at a table in the corner and working while activity swirls around me. Colleagues and students nod and smile; sometimes one of them drops by for a brief conversation. What is it about being in a space with other people who are all doing their own thing and not paying attention to me that I prefer both to being alone and to being with people with whom I am required to engage? I’m sure something insightful about the interplay between inner and outer, internal and external, would be appropriate here, but all I know is I like that dynamic. That’s the best I’ve got at the moment.

Several years ago I participated in a writers’ workshop called “Apart, Yet a Part,” in which each of the participants was given the whole morning and most of the afternoon to write on their own (“Apart”), but also were required to participate in group sessions in the late afternoon and evening (“a Part” of something bigger than themselves). I thought the conference title was both clever and hokey, but have come to realize that the separate-but-together energies it identifies are very important to my natural rhythms. I’ve also come to realize that any place can turn out to be a sacred space.

The philosopher and person of faith in me both wonder about this. Does this mean that every place can be sacred because I bring that sacredness with me as a earthly creature infused with the divine (which is what “incarnation” means, after all), a sacredness that I simply need to have the awareness and sensitivity to release? Or does this mean that every space is sacred because every part of creation is infused with the divine, whether we notice it or not? Either way, sacredness is ready at any moment to percolate up into even the most seemingly mundane and “normal” spaces and circumstances. Even a Dunkin’ Donuts. 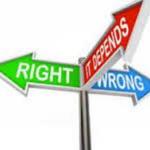 January 23, 2018 Fact or Opinion?
Recent Comments
0 | Leave a Comment
Browse Our Archives
get the latest from
Freelance Christianity
Sign up for our newsletter
POPULAR AT PATHEOS Progressive Christian
1 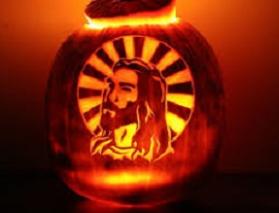