Toward the end of a transformative four-month sabbatical in the spring of 2009, I heard a homily given by a Benedictine monk at the abbey where I had been spending a couple of hours a day reading psalms and praying with the monks for weeks. I don’t remember anything about the homily except this quotation from Saint Catherine of Genoa: My deepest me is God. 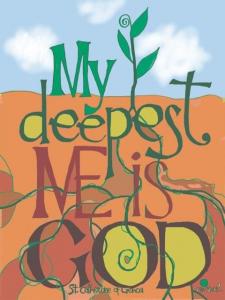 Without exaggeration, any evidence of positive internal change that I have tracked in this blog over the past several years is traceable back to that one simple but profound phrase. The deepest part of each of us is divine. What would it be like if we actually believed that and acted on it?

“My deepest me is God.” Believing this is a significant challenge for someone like myself who cut his religious eye teeth on the doctrine of original sin and total depravity. Catherine of Siena’s insight runs directly contrary to that pernicious doctrine. Shortly after our return from a wonderful nine-day vacation in Scotland last summer, Jeanne and I went to hear a presentation at a local Episcopal church, followed by a Eucharistic service, on Celtic Spirituality. The presenter that afternoon was Rev. John Philip Newell, an ordained Church of Scotland minister who is internationally recognized as an expert and a leader in Celtic Christianity and spirituality. His accent and his peaceful presence reminded us of the beautiful country we had visited and did not want to leave.

Newell began his talk by quoting Julian of Norwich; the most familiar saying from Julian that has come down to us is “All shall be well, and all manner of thing shall be well” (more on this claim in a later post this week!). Newell continued, however, by quoting an even more controversial saying attributed to Julian:

We are not simply made by God, we are made of God.

We are not, Newell said, just fashioned from afar by a distant Creator. We are born from the very womb of the Divine. Newell used this insight to contrast the foundational Celtic Christian insight that all of creation, including all human beings, are bearers of the divine, with a more familiar story about human nature that is central to much of traditional Christian thought and belief.

The Celtic understanding of human nature, expressed eloquently by Julian, is fundamentally opposed to the doctrine of original sin, which tells us that human beings are totally depraved and entirely lacking in any natural goodness. The conflict between which understanding of human nature would dominate in Christian theology was largely fought between Pelagius, a Christian theologian from Britain, and Augustine of Hippo in the 4th century AD. Augustine and his allies won the argument, Pelagius—as all losers in theological disputes—was branded a heretic, and Celtic Christianity became a “fringe element” of Christian spirituality that still survives in hidden corners of the globe.

I am Exhibit A of the damage that being raised on original sin can do to one’s self image and psyche. As I did briefly at the start of this essay, I often ask myself how different I would be, how different our world would be, if we truly believed that our natural state and status is one of “original blessing,” as Matthew Fox says, rather than of original sin. Newell told a powerful brief story that addresses this very question.

A number of years ago, Newell said, he was delivering a talk in Ottawa that focused primarily on the text from the first chapter of John’s gospel that describes the Word as “the Light that enlightens every person coming into the world.” In attendance that evening was a Canadian Mohawk elder. He had been invited to the gathering to make observations about the parallels between his First Nations spirituality and the spirituality of the Celtic world.

In the context in which it was asked, the elder was asking those present to consider whether the violence and destruction caused by the European invasion of the New World, violence and destruction often perpetuated in the name of Christ, might have been ameliorated or even avoided altogether if the newcomers had seen the natives as bearers of the divine light rather than as depraved and godless. But his question is also a timeless one, a question that resonates powerfully in our current polarized country and world.

What if we habitually and naturally embraced ourselves and each other as bearers of light, rather than approaching ourselves and each other with negativity and suspicion? What if we greeted the divine in each other openly and easily rather than assuming the worst as a matter of course? There is no switch to flip in order to accomplish this—especially since the dominant religious perspective that has shaped our culture, regardless of whether a person is religious or not, has told us that there is something fundamentally wrong with human beings.

“My deepest me is God.” And, Catherine of Genoa might have added, “your deepest you is God as well.” It strikes me that there are two types of people in the world. Those for whom it would be more difficult to believe Catherine’s claim about other people, and those for whom it would be more difficult to believe it about themselves. By nature, I fall into the second category; I still have to pay close attention to connect with the divine deep inside and to believe that it is me rather than an external something that occasionally takes up residence. For those who seek to find the divine in their deepest self, I offer this poem—“On Solitude”—from Irish poet John O’Donohue, another teacher of Celtic spirituality:

May you learn to see your self
with the same delight,
pride, and expectation
with which God sees you in every moment. 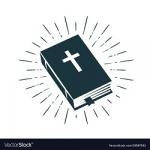 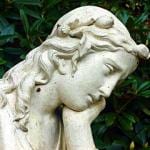 Liberal Christianity on the Rise
Freelance Christianity
Books by This Author Books by Vance G. Morgan