Not long ago, Jeanne and I had dinner with Beverley and Ed, two Long Island friends whom we do not see often enough. Jeanne and Beverley met and became close friends a number of years ago when they both worked for the same university; neither have worked there for some time now, but their friendship has stayed strong over the years and miles. Jeanne calls Beverley “Ethel” to Jeanne’s “Lucy”—which must be okay with Beverley, since I’ve never heard her complain about it. 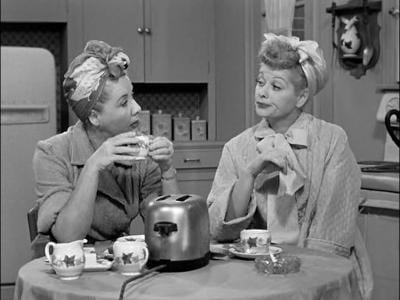 At dinner that evening, Beverley remarked about what an unlikely pair we are, extroverted Jeanne and laid back me. Beverley knows Jeanne well, me far less well—I understand how Jeanne and I can appear to be an odd couple, since our public personas (Jeanne’s extroversion, my introversion) are probably more extreme than is actually the truth. In response to Beverley’s observation, I replied that we’d been at this for over thirty years, so I guessed that we will make probably make it.

Valentine’s Day (and Jeanne’s birthday, and our anniversary in July, and the anniversary of when we met in November) always provides an opportunity to step back and try to observe us from a bit of a distance. Truth be told, though, there is no “objective” place from which to observe something in which one has been fully embedded for more than three decades, almost exactly half of one’s life.  Instead, let me take the opportunity on this “day for lovers” to reflect on a few passages from books and friends that express why I’m so privileged and lucky.

In Small Victories, one of Anne Lamott’s many excellent books, Anne relates in her usual hilarious way what it was like as someone just turned 60 to try online dating for the first time (I’m pleased that now, a few years later, Anne reports that she is in a committed and wonderful relationship). As she read descriptions of what various possible matches were looking for in a relationship, she began to form her own description.

Union with a partner–someone with whom to wake, whom you love, and talk with on and off all day, and sit with at dinner, and watch TV and movies with, and read together in bed with, and do hard tasks with, and are loved by. That sounds really lovely.

Most people would not list this on a dating site as their vision of a great relationship, but those who have been around the block a number of times know that it’s the best thing ever. When I first read this passage, I thought “that sounds like Jeanne and me!” And you’re right, Anne–it is lovely.

I also appreciate this passage toward the end of Rachel Kadish’s Tolstoy Lied, as the main character reflects on what she has learned about love.

Jeanne often observes, usually after spending some time with her drama-laden family in New York, how quiet and comparatively uneventful our daily life together is. We have a peaceful, normal life of the sort that those who know only the extroverted side of Jeanne would find hard to believe. Only those who lived through it would know how many life experiences, many of them challenging and difficult, have brought us to this very welcome place of peace and quiet happiness. Ours is not the sort of love story that people write novels or make movies about—there’s too much of the everyday and too little blockbuster drama to hold a viewer’s attention. But that’s something to be embraced.

In one of her many profound essays, Marilynne Robinson writes that

Human love in the purest forms we can know it, wife and husband, parent and child, has the aura and the immutability of the sacred.

This is profoundly true. Jeanne and I could not be more different by nature, even though we have modified each other’s extremes a bit over the years. But one thing we have always shared is a deep desire to know God. The paths this desire has led us down are not the same; sometimes they aren’t even similar. But we both recognize the divine when we bump into it, and I have learned more about God’s love, acceptance, joy, and presence from over thirty years together with Jeanne than religion could ever have taught me. I’ve learned not to be surprised when the day-to-day and the sacred turn out to be the same thing. Life with Jeanne has taught me that.

One of the most beautiful expressions of grown-up love I have ever read came, unexpectedly, from a Facebook commenter on one of my blog posts a while ago. I truly forget which post it was or what this comment was in response to, but as soon as I read it, I saved it in my “don’t forget this” file. After describing “romantic love” in sparkling terms, this person wrote that

What I know now is that this kind of love, while wonderful, is for kids. Real love is more textured than that. Real love is about fighting for something long after its flaws are laid bare. It’s about caring so deeply, you have no choice but to place another’s well-being above your own. Love is not a feeling. It transcends feelings. Love is what allows us to be disillusioned and to somehow still believe. Love has a way of brightening even the darkest moments.

For a number of years, Jeanne and I have had a good-natured disagreement about which of us is going to die first—neither of us wants to outlast the other. I can’t imagine life without the person with whom I have for better and for worse spent almost half of my years. My Valentine’s Day 2019 wish is what the author of the Book of Tobit asks: Mercifully grant that we may grow old together. 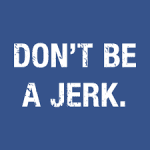 February 12, 2019
The Most Important Lesson from the Sermon on the Mount: Don't be a Jerk
Next Post

February 17, 2019 An Excuse Not To Think
Recent Comments
0 | Leave a Comment
Browse Our Archives
get the latest from
Freelance Christianity
Sign up for our newsletter
POPULAR AT PATHEOS Progressive Christian
1