Happiness is Overrated, but Learning to Live Well is Not

Happiness is Overrated, but Learning to Live Well is Not May 30, 2019 vancemorgan

Is there any human state or condition more elusive, or more difficult to define, than happiness? Aristotle, my top candidate for the greatest philosopher in the Western tradition, famously wrote that every human being above all wants to be happy—they just disagree about the definition of the term. As our culture generally defines happiness, it seems to be a lousy goal for a human life. It’s a feeling, an emotion, a “feel good” state that certainly does feel good when one is experiencing it, but its ephemeral nature makes it more of a tease than a legitimate life project.

But Aristotle’s word usually translated as “happiness” does not mean a feeling, smiling a lot, or anything of the sort. The word is eudaimonia, literally “good spiritedness,” which is best translated as “human flourishing” or “human fulfillment.” What people want, in other words, is not a life filled with nice feelings and lots of smiles and laughter. What they want is a life that means something. A lifelong process that over time turns one’s best potentials into actuality. A life, to borrow from Thoreau, which at the end will not leave one wishing that one had bothered to actually live rather than just mailing it in. That’s a program I can resonate with.

Of the many spiritual guides whose insights have influenced me over the past several years, none is more capable of reorienting me quickly and connecting me with what I know to be true in my deepest me than Joan Chittister. She tells the story of a Muslim elder known for his piety and virtue who, when asked how he become so holy, would always reply “I know what is in the Qur’an.” When he died, everyone raced to his hut to see what was in his copy of the holy book. The person who got there first reported to the rest that “What is in his Qur’an are notes on every page, two pressed flowers, and a letter from a friend.” Chittister comments that the sage had learned that “If the question is, what is really important in life?—the answer is only life itself, living it well, immersing it in beauty, love, and reflection.”

The two pressed flowers in the elder’s Qur’an are reminders of beauty, calling us to remember that there is in life, deep down, an essential basic and beautiful goodness that redeems all the moments we ourselves overlay with greed or hatred or anger or self-centeredness. One morning last summer in the midst of writing on our back yard deck, I heard the distinctive call of a cardinal, my favorite bird (next to penguins). As I paused to listen, the cardinal flew in all of his scarlet glory to perch on the branch of a dead tree in our neighbor’s yard about fifteen feet from where I was sitting.

The letter from a friend in the elder’s Qur’an is a reminder that we are all interconnected—in John Donne’s overworked phrase, none of us is an island. In my own natural solitude and introversion, this is a greater challenge to incorporate than reflection and beauty. Thank goodness for Jeanne who reminds me to stay in touch with a colleague and friend with whom I had a chance conversation, for my cousin who posted old family pictures on Facebook, and even the memorial service in Philadelphia not long ago, remembering the wonderful life of a good friend—these remind me that connectedness to others, even those whom I do not know but are sharing the human journey with me, is the most important part of a well-lived life. 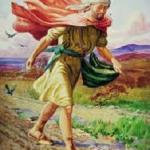 June 2, 2019 Passing the Baton: An Ascension Sunday Reflection
Recent Comments
0 | Leave a Comment
Browse Our Archives
get the latest from
Freelance Christianity
Sign up for our newsletter
POPULAR AT PATHEOS Progressive Christian
1