How is your Optimism Doing These Days?

A few weeks ago in the interdisciplinary Honors course that I am team-teaching in this semester, we are smack in the middle of the 18th century. And that, among other things, means satire. I love satire and frequently use it in class to great effect, an effect heightened by the fact that the average nineteen-year-old can’t tell the difference between satire, irony, and a spreadsheet (even when they are in the Honors program).

The texts for our satire seminar included Jonathan Swift’s “A Modest Proposal,” published in 1729. The complete title of Swift’s essay is A Modest Proposal for Preventing the Children of Poor People From Being a Burthen to Their Parents or Country, and for Making Them Beneficial to the Publick. In it, Swift in apparent seriousness proposes that the impoverished Irish might ease their economic troubles by selling their children as food for rich gentlemen and ladies. He goes to great lengths to support his argument, including a list of possible preparation styles for the children, and calculations showing the financial benefits of his suggestion, all in a matter-of-fact style that can easily convince the reader, for a while at least, that he is perfectly serious. It takes some time for the unsuspecting reader to realize that Swift’s essay is a clever and devastating satire and commentary on the abuse of Irish peasants by their English landlords.

Why was some of the greatest satire ever produced written in the eighteenth century? Undoubtedly for a number of reasons, not the least of which includes the fact that optimism was in the air. In the early decades of the eighteenth century, the European Enlightenment was in full swing.  Over the previous century and a half, spectacular scientific advances, the exploration of the New World, and the rise of enlightened rulers had given rise to a general optimism about human progress and our ability to improve the world around us. The breakthroughs of Galileo, Newton, and others led many to believe that we live in a rational universe, created and overseen by a rational God, a universe whose puzzles and riddles are there for the solving through the systematic and rigorous use of the human mind. 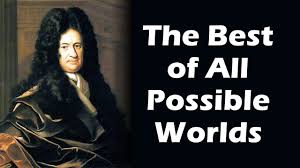 Gottfried Wilhelm von Leibniz, one of the greatest of the Enlightenment philosophers, summarized one aspect of this Enlightenment perspective in a memorable claim: “This is the best of all possible worlds.” A good and omnipotent creating God could do no other than create the best creation possible—the fact that it often appears otherwise from the human perspective is a result of our ignorance, an ignorance that Enlightenment progress promised to reduce and, perhaps, ultimately eliminate.

The earthquake had wide-ranging effects on the lives of the populace and intelligentsia. It had struck on an important religious holiday and had destroyed almost every important church in the city, causing anxiety and confusion amongst the citizens of a staunch and devout Roman Catholic country. Theologians and philosophers focused on and speculated about the religious cause and message, seeing the earthquake as a possible manifestation of divine judgment. One of these intellectuals was François-Marie Arouet, better known by his nom de plume, Voltaire–he was also on our seminar reading list.

Panglossian arguments infect our contemporary world everywhere one looks. Recall, for instance, how over the past two years politicians from all sides defended and argued for their pre-established positions concerning Covid-19 vaccination mandates, often in denial of clear facts to the contrary of their positions. Similarly, ever-present religious rigidity results from the insistence of faithful persons that a handful of doctrines must be true and are unrevisable, even when they explain nothing and do damage on a regular basis.

Toward the end of Candide, the remaining handful of Candide’s friends reflect on what they have learned. Pangloss admits to something that many of us fall prey to—paying lip service to commitments that one no longer believes are true. “Pangloss owned that had had always suffered horribly, but as he had once asserted that everything went wonderfully well, he asserted it still, though he no longer believed it.”

What is one to do when one finds out that what one professes to believe has become, as Macbeth said when reflecting on his wife’s suicide, “a tale told by an idiot, full of sound and fury, signifying nothing”? For those of us who are honest, even our most cherished beliefs and commitments sound exactly like that on some days. After one hundred pages of disaster, the final episode of Candide offers something both practical and hopeful. Candide and his friends meet an elderly Muslim who has spent his life cultivating twenty acres with his children, noting that “our labor preserves us from three great evils—weariness, vice, and want.” Candide is attracted to this and, as his friends make various suggestions as to how they might move forward, responds “we must cultivate our garden.”

After Pangloss’ final attempt to prove that this is the best of all possible worlds, Candide turns his back on big-picture argumentation once and for all in the final line of the novella: “All that is very well, but let us cultivate our garden.” There’s a very important insight here that transfers nicely to our 2022 situation. I like economist Paul Romer’s idea of “conditional optimism.” He explains: “Complacent optimism is the feeling of a child waiting for presents. Conditional optimism is the feeling of a child who is thinking about building a treehouse: ‘If I get some wood and nails and persuade some other kids to help do the work, we can end up with something really cool.’” Pangloss’ optimism throughout Candide has been complacent, while Candide has come to something akin to conditional optimism. Things are more likely to work out for the best when we are clear about what we need to be actively doing to make it so.