In a perfect world, I would never give a written final exam in any class that I am involved with. Since I frequently team-teach with colleagues who do not share my vision of a perfect academic world, many courses I am involved with have traditional final written exams. But in my own classes, at least those past the introductory level, final exams are oral. As I often tell my colleagues who are skeptical of the value of oral exams, I can find out more about what a student has learned in a half hour conversation than hours of writing could tell me. 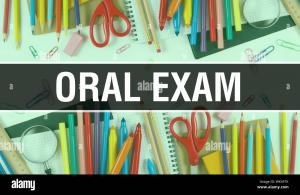 Last spring during the oral exams for the “Grace, Truth, and Freedom in the Nazi Era” colloquium that I teach with a colleague from the history department (he agrees with me concerning the value of oral exams), the conversation took a very interesting turn. One of the authors we considered during the semester was Simone Weil, who suggests that attentive listening, what she calls “attention,” is the first step to bringing those who are “afflicted,” persons whose identity has been stripped from them either by chance or deliberately by others, back toward healing and a restoration of their humanity.

Think of the emaciated, skeletal prisoners of Auschwitz on the day that Allied soldiers liberated the death camp. I’m sure you’ve seen the pictures or film footage. These are people from whom every shred of dignity, identity, and humanity has been stripped. They are the walking dead. And, to use Simone Weil’s word, they are “afflicted.” The temptation, of course, is to seek to address the most obvious physical needs of such persons—food, clothing, shelter, medical care, and so on. But, Weil suggests, there is something more profound and immediate than physical help that those who are afflicted need. She writes that

Those who are unhappy have no need for anything in this world but people capable of giving them their attention. The capacity to give one’s attention to a sufferer is a very rare and difficult thing; it is almost a miracle; it is a miracle . . . The love of our neighbor in all its fullness simply means being able to say to him: “What are you going through?” It is a recognition that the sufferer exists, not only as a unit in a collection, or a specimen from the social category labeled “unfortunate,” but as a man, exactly like us, who was one day stamped with a special mark by affliction.

How do I begin to restore the humanity and dignity of one from who those things have been violently stripped away? Not by addressing their physical needs as one would solve a mathematical equation, but rather by saying “tell me your story.” In this way, Simone Weil argues, I tell the afflicted person—to use a current popular phrase—“I see you. At the core of this starving, filthy, corpse-like creature in front of me I recognize a fellow human being. What are you going through?” And in that way, through the simple but profound recognition of another’s personhood, the restoration of human dignity begins.

Many of our colloquium students found Weil’s thought challenging, but profound. As my colleague and I conversed with one of our students, a strange story from the Gospel of John occurred to me. It’s the tale of a lame man whom Jesus encounters at the Pool of Bethesda in Jerusalem, a pool rumored to have healing powers if one gets into the water when it is intermittently “stirred up.” The guy reportedly has been there for thirty-eight years. After briefly describing the story which, as it turned out, she was familiar with, I said “We know that Jesus is going to heal this guy. But instead of just getting down to business, he firsts asks the strangest question: Do you want to be healed? Why does Jesus ask such a seemingly dumb question?” 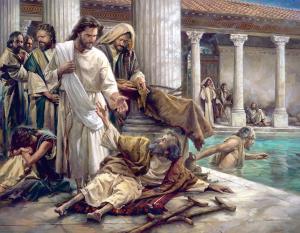 At first, the student speculated that perhaps this man made his meagre living begging as a lame man. Jesus is asking him “Are you sure you are prepared for the consequences of no longer being lame?” The man no longer will be able to make money begging if he can walk. But after some further conversation, she suggested instead that perhaps Jesus is exhibiting Simone Weil’s attentiveness. By asking for the man’s consent, Jesus shows that he does not consider the lame man as a problem to be solved or a disease to be cured, but considers him rather as a person, a human being with dignity, whose permission is needed simply because he is a human being equal in dignity to the one who is asking him the question.

A second season episode of “The Chosen,” the multi-year treatment of the life of Jesus that I have written about occasionally on this blog, centers on the Pool of Bethesda story. The lame man’s name is Jesse; throughout the episode, we are given several insights into his history. He fell when climbing a tree as a kid and broke his back. His family raises him with love (his younger brother is Jesus’ new disciple Simon the Zealot), but he ends up years later, embittered and frustrated, at the Pool of Bethesda. Because he has no one to help him, he cannot get himself into the water before it becomes calm again. Picking him out from dozens of people in similar straits, Jesus begins a brief conversation with his remarkable question.

Jesus: I have a question for you.

Jesse: I don’t have many answers.

Jesus: Do you want to be healed?

Jesus: You’ve been having a bad day for a long time.

Jesse: I have no one to help me into the water, and when I get close, the others step down in front of me.

Jesus: Look at me. That’s not what I asked. I’m not asking about who is helping you, who is not helping you, or who is getting in the way. I am asking about you . . . You don’t need this pool. You only need me. So. Do you want to be healed?

The scene is striking in its simplicity. Jesus asks Jesse the question because he wants Jesse to know that, despite his affliction, his poverty, his bitterness, and his pain, Jesus recognizes in him the beauty and dignity of a human being. And Jesus will not presume to invade Jesse’s world without Jesse’s consent. There is nothing more profound contained in the story of Christianity than that God became human—and that this was not so much a reflection of how far God had to descend, but rather of how infinitely valuable human beings are. As the traditional Hindu greeting “Namaste” says: “That which is holy in me recognizes that which is holy in you.”

January 17, 2022
Thoughts on Martin Luther King Jr. Day: Does the Arc of the Moral Universe Really Bend Toward Justice?
Next Post