Is Tolerance a Luxury or a Virtue?

Is Tolerance a Luxury or a Virtue? December 29, 2020 vancemorgan

Earlier this month, I posted an essay titled “It Isn’t True Just Because You Believe It” on this site, built around Friedrich Nietzsche’s observation that, despite most everyone’s claims to the contrary, “there is no immaculate perception.” In other words, my beliefs—even my most cherished ones and the ones I’m willing to go to virtual battle over—are not true simply because they are mine. Everyone’s beliefs and perceptions are influenced by their experiences and filtered through various preexisting assumptions and prejudices.

Now what? I asked. “If there is no rational, objective standpoint according to which each or any of us can form fair, just, and unbiased beliefs and judgments, what is a more appropriate goal in terms of what we believe and how we act?” Note, please, that nowhere did I claim (nor am I claiming now) that there is no such thing as objective truth. My point was (and is) that I have no reason to think that what I believe matches up to that objective truth simply because I strongly believe it. How do I engage with people with beliefs contrary to mine, beliefs and commitments that they undoubtedly are as strongly attached to as I am to my beliefs and commitments?

As a recent example of fruitful interaction between people of very different political beliefs, I described Thanksgiving dinner at Jeanne’s niece’s house a year ago, a gathering where a couple of dozen people who have many, many serious and possibly volatile disagreements about important political and social issues managed to have a wonderful time for a few hours without getting in each other’s face because they chose to focus instead on what we shared in common: family. I actually thought that this post was pretty straightforward and non-controversial, even somewhat benign. Not one of my edgier efforts. I was wrong.

My post was shared on a popular progressive Christian Facebook site the next day, and comments started rolling in, beginning with this one:

Written from a position of privilege. I’ve cut off family members who believe my marriage to my spouse of twenty years is sinful and that he and I should not have been allowed to adopt our son. When people attack your fundamental right to exist, then it’s incumbent on me to protect myself from their harshness. The lack of Christianity, so to speak.

Another person shared that my essay

Sounds way too much like accepting attacks on the marginalized and vulnerable at the table. I don’t go to family gatherings to be vilified for who I am (whether I’m out to certain people or not). That is not a family gathering; it is abuse. And if you invite someone who abuses me or mine, I’m not showing up.

To be fair, the issues not being discussed at the Thanksgiving table I describe in my essay were not sexual orientation, nor was I biting my tongue as my in-laws dropped racist slurs. But the comments reminded me of just how intimately personal and contextual such matters can be.

I take to heart the observation, raised a number of times in the Facebook comment thread, as another commenter noted.

And that’s entirely fair. The twenty or so people sitting around the Thanksgiving table I described are all white; none of us have had to spend any time during their lives justifying their existence simply because of the color of their skin or their sexual orientation. Our identity does not depend on our political choices and orientations, and we don’t have to work very hard to find things to agree about (although what we strongly disagree about—and virtually never talk about—is important). White privilege, anyone? I’ve worked over the past several years, both individually and with my students, on raising awareness about white privilege, and I appreciate being told that my essay—which I thought was pretty universally applicable—is yet another example of it.

Finally, it became clear that everyone is on “hyper-alert” these days concerning disagreement and its consequences. For my whole life, conservatives have been given more of a pass for saying offensive things than progressives have; this is not surprising, since “tolerance” is a virtue embraced far more by the left than by the right. But after the last four or five years, it strikes me that progressives are less willing to be tolerant of those at whom they used to just roll their eyes.

Before 2016 I would been more supportive of this viewpoint but I think at this point it’s like asking townspeople to be “understanding and compassionate” of the Vandals who want to rape their people and pillage their homes. The GOP now represents un-Christian and immoral stances. They support violent action against normal citizens. I see them as domestic terrorists and you don’t legitimize terrorists by saying their desire to blow you up is just a “unique perspective”

Fair enough, once again. It doesn’t take a lot of effort for me to shield myself from racist, homophobic, and misogynistic language—my profession as a college professor, living in the Northeast, and my white maleness make it easy to create a silo in which I hear and pay attention only to the voices that I choose. I thank the Facebook commenters for making me aware that this is, yet again, something that only those who are privileged in various ways have the freedom to do.

My guess is that many of us were taught as youngsters that tolerance is an important virtue. Many of my (mostly white) students have told me over the past several years in my ethics classes of being taught that tolerance is perhaps the most important virtue, maybe even the only virtue when it comes to interacting with others. But I’m wondering . . . is tolerance a virtue that only privileged people have the luxury of cultivating? What does it cost me, a person privileged in gender, race, and economic status, to be tolerant of those believe differently than I do? Absolutely nothing. But does a person of color or someone in a same-sex marriage have the luxury of being tolerant of those whose opinions and attitudes dismiss and diminish their very existence? Absolutely not.

I hope to be exploring these and related issues regularly over the coming weeks on this blog, particularly when my “Current Problems in Ethics” course begins in a month. I welcome, indeed I need, your comments and input. What are your experiences related to tolerance and privilege? 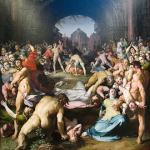 December 27, 2020
A Different Kind of Christmas Story
Next Post

December 30, 2020 Am I Old Yet?
Recent Comments
0 | Leave a Comment
"I'm always intimidated by comments that are longer than my original essay."
Vance Morgan Don’t Put Jesus Back in the ..."
"The Easter Story has traditionally included supernatural miracles and religious meanings. For most Christians, Jesus ..."
John Frederick Noack Don’t Put Jesus Back in the ..."
"agreed."
Brandon Roberts Faith and Doubt Go Hand in ..."
"One of my favourite quotes:Certainty is vastly overrated and is frequently dangerous, especially when claimed ..."
Lost Explorer Why Doubt Is My Favorite Virtue
Browse Our Archives
get the latest from
Freelance Christianity
Sign up for our newsletter
POPULAR AT PATHEOS Progressive Christian
1

The Fallacious Fear Factor, Part 2
As we reconstruct our faith, I believe it is essential to spend...
view all Progressive Christian blogs
What Are Your Thoughts?leave a comment
Copyright 2008-2021, Patheos. All rights reserved.
error: Content is protected !!