Lessons Learned From a Blackberry Bush

A few years ago, Jeanne returned from a weekend with a friend in Vermont with a little plant in a box—a Vermont blackberry bush. It has been trying to take over our back yard ever since. It has also recently been the source of a fascinating, ongoing conversation that Jeanne and I have had about fruit, growth, and how to bring what is greater than us into the world. 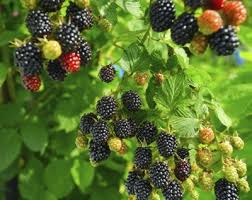 Our new family member looked innocent enough, but it actually had delusions of grandeur and designs on the spaces occupied by its plant neighbors. After surviving its first winter, our new blackberry bush awakened to spring by busting out all over with new leaves, shoots that grew so quickly that I could almost hear them doing it, and random offspring (officially called “suckers”) sticking their little unwanted green heads up as far as ten feet away from the mother bush. In the middle of another, well-established plant, in the middle of the lawn—these new blackberry bush suckers had neither regard for my plans and lawn design, nor respect for the personal space of their neighbors.

At school and at church I would occasionally report the shenanigans of our bossy bush; I discovered in short order that more experienced gardeners than I have known for a long time that berry bushes are aggressive bastards. “You think that’s bad, you should see what my raspberry bush is doing!” was a typical response to my complaints. 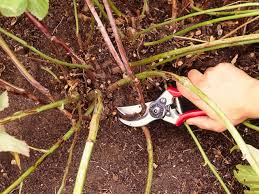 It’s been a few years now. Every spring I pull up random shoots from the blackberry bush in the lawn, but have allowed two or three new shoot to stay in the flower beds—shoots that now are as large as the original. Left untrimmed, each bush would sprout stalks taller than my six feet and branch out a few feet in every direction.

I learned from a Google search how to prune blackberry bushes; blackberries only flower on stems that are two years old, and once a stem has flowered, it will never flower again. The prudent pruner cuts two-year stems to the ground after flowering and fruiting, channeling energy toward the one-year shoots that will flower next year.

I took great delight in ruthlessly cutting our bushes down to size. They look very unhappy post-trimming and going into the fall, but in the spring they always revive with new vigor and obnoxiousness. It doesn’t help that for some reason, this plant is Jeanne’s favorite of the dozens of items in our back and front yards. If it were up to her, our back yard would contain nothing but our blackberry bush and its offspring. While I am annoyed with its aggressiveness and the work I have to put in to keep it under control, she sees nothing but its beauty and productivity—that this plant, as unruly as it is, regularly produces wonderful fruit. I marvel annually at the methodical, predictable, and completely miraculous way in which plants emerge from the ground, grow, 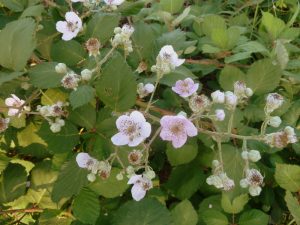 A couple of years ago Jeanne paid special attention to how her favored bush does this, expressing the same wonder and amazement on a daily basis as she did the first time she petted a real cow. A blackberry bush first sends shoots up, then out, and in the midst of its out-of-control spread it sprouts a number of little white flowers at the tips of many of its branches. These little flowers are very pretty and last a couple of weeks; when their petals fall, the tiny center of the flower remains, looking rather lonely and naked. But these innocuous petal-less buds are what grow into blackberries.

Slowly they turn from green, to light red, to darker red, eventually to deepest black, growing larger and larger in the process. Ripe blackberries from our bush have a taste so fabulous that it can’t be described. 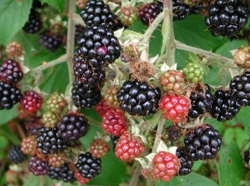 This is a great insight, since many of us who have heard about the fruit of the Spirit from the apostle Paul our whole lives tend to think of it as something describing what the Spirit produces for us. Rather, the fruits of the Spirit—love, joy, peace, longsuffering, gentleness, goodness, faith, meekness, temperance (pardon my King James Version)—are the natural fruits produced by those who live their lives energized by the Spirit within. 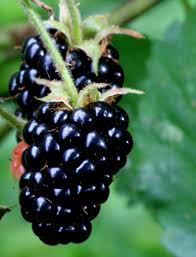 So often we get impatient with ourselves because our natural American results-oriented energy has little or no place in the plant-like processes of the Spirit. We differ from plants because we can choose to cooperate with or resist the Spirit within us—a plant just does what it is fully equipped to do without worrying from day-to-day if it is doing it right.

Patience and confidence go hand in hand as we proceed from the first signs of fruit to full maturity, then cycle back to do it all over again. As Paul writes elsewhere, “he who began a good work in you will see it to its completion.” I’m glad that the cosmic tender of the plants has more patience with me than I have with our blackberry bush. 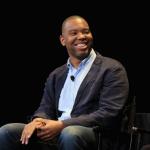 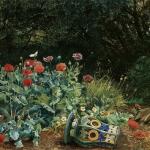