Living On the Edges of the Christian Circus Tent

Living On the Edges of the Christian Circus Tent September 8, 2020 vancemorgan

Jeanne and I celebrated our 32nd anniversary in July—the gifts we gave each other are reflective of a relationship that that has stood the test of time and in which the partners know each other very well.

My gift from Jeanne was a power washer. It came at a perfect time, because we had just dropped a large amount of money on a new roof for the house a week or so earlier. There was nothing the house needed more than a complete bath, after getting a new hat that cost several thousands of dollars. As I’m sure Jeanne expected, I spent the next two days power washing the house from top to bottom, continually amazed by how much dirt can build up over twenty-five years. I enjoyed it so much that Jeanne insisted on getting in on the fun, power washing the outside of our backyard fence so that the neighbors could be impressed by the effects of our new toy as well.

Jeanne’s gift from me was a gazebo for our backyard deck. A couple of decades ago I built the deck after tearing out the horrendous deck (complete with green Astroturf-like carpeting) that originally came with the house. The deck I built now shows the wear and tear of many years as well as the many imperfections resulting from being constructed by someone who didn’t know what the hell he was doing. Before assembling the gazebo, I power washed the deck (obviously), then spent a couple of days once again engaged in manual labor well above my pay grade, resulting in a comedy of errors that deserves its own blog post (coming soon). 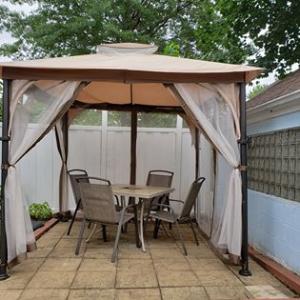 We’ve already hosted friends twice (socially distanced, of course) for evening drinks in our new gazebo—we love it. The other day, as I was grading some student essays out back, it occurred to me that our gazebo, with its diaphanous zip-up walls intended to keep undesirable bugs out while allowing people to see in and out, is a metaphor for something I’ve been thinking about for a long time: membership in the community of Christian faith.

“Who are you writing your blog for?” I am often asked. There are several answers that I have given over time, but the one that both surprised me and that is probably the most accurate is when I once answered “I guess I am writing for people like me.” What kind of person am I when it comes to faith, philosophy, and the real world? My gazebo actually helps with answering that question, but think bigger.

Imagine a large tent. Make it a three-ring circus tent, since inside the tent I am imagining things both entertaining and silly happen regularly. This gigantic tent is not for the entertainment of spectators, though; rather, it is a place for groups of people who call themselves “Christian” to stake out space and set up shop. Baptists occupy one section of the tent, Catholics over there, Presbyterians in a third location—overall, there are dozens of groups who call the Christian tent home, and within these larger sub-groups there are often sharply defined sub-sub-groups. 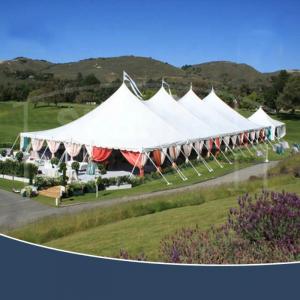 One might expect that while recognizing their important differences, the various groups inside the Christian tent would celebrate their common, shared name and home, but this often is not the case. Some groups have open borders around their area of the tent, and frequently converse with people from different parts of the tent, but others erect fences, barriers that tend to become more complicated and impenetrable over time. Many groups have gatekeepers tasked with ensuring that no one enters their section of the tent without satisfying various, often complex and intricate, criteria verbally and/or in writing. Over time, many groups within the Christian tent have come to believe that their own section is the only place where real Christians are to be found. Groups in other parts of the tent are posers, “Christian” in name only and, perhaps, also recipients of God’s displeasure and headed to hell.

Regular readers of this blog know that I come from an inner section of the tent, an area whose residents consider themselves to be the exclusive, favored “real Christians” as opposed to everyone else who doesn’t really belong in the tent at all. Over the years I have wandered throughout the tent, venturing closer and closer to the edges, often appearing to others—sometimes to myself—as having at least temporarily ventured outside the flimsy walls altogether. But this is where I’m most at home, conversing with those for whom the life of faith is not defined by a commitment to dogmas, doctrines, or prescribed rituals.

Once several years ago, I was asked after a presentation by an obviously annoyed questioner “Isn’t there something that a person has to believe with certainty in order to be a Christian?” “I don’t know,” I answered. “Is there?”

With less snark, I would answer somewhat differently today. Yes, there is “something” that a person must embrace in order to be a person of Christian faith, but that “something” is extraordinarily resistant to easy summary or logical statement and argumentation. That “something” is experiential rather than doctrinal, and it most definitely is not dogmatic. Looking back, I realize that exploring and engaging with why I confidently call myself a Christian while resisting traditional religious formulae and straitjackets has been the central focus of this blog for the past nine years. That it is still going strong tells me both that this engagement is a journey and exploration, as well as that many others experience faith similarly.

The tent of faith is large and has permeable walls allowing for easy access and exit. It has as many imperfections and quirks as the gazebo I just built in our back yard. But it’s a great place to be. For me, it’s the only place to be. 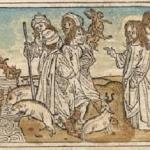 September 6, 2020
What it Truly Means to be Free
Next Post

September 10, 2020 Silence: The Best Answer to Prayer
Recent Comments
0 | Leave a Comment
Browse Our Archives
get the latest from
Freelance Christianity
Sign up for our newsletter
POPULAR AT PATHEOS Progressive Christian
1