Of Introverts and Sheep

Of Introverts and Sheep July 18, 2021 vancemorgan

I have the privilege of giving the sermone at Trinity Episcopal Church in Pawtuxet, RI this morning. Here’s what I will say.

If you are able, everyone stand up! Really—good to get a bit of exercise at the beginning of a sermon! If you suspect or know for sure that you are an extrovert, sit down. Now, if you suspect or know that you are an introvert, sit down. Those of you still standing are part of the balanced few. My mother used to regularly test as equally balanced between extrovert and introvert on various personality texts. She thought it was evidence that she was wishy-washy and boring. I told her that, no Mom, this means that you are a rarity: A well-adjusted human being. 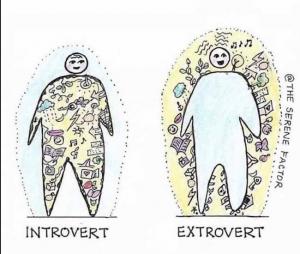 It will not surprise anyone who knows me, or even anyone who has seen me in operation around other people for more than a minute or so, to learn that I am an introvert. Big time. Just to make sure I haven’t significantly changed over the past decade or so, I took an online version of the Myers/Briggs personality test this past week. I’m still an extreme introvert.

When I have shared the news of my off the charts introversion with my students in class over the years (usually when seeking to inspire the quieter students to be more actively engaged in discussion), they are usually shocked. How can an incurable introvert do what I do for a living? In order to challenge the common impression that introverts don’t like people, I provide them with the distinction between extroverts and introverts that I learned from my father (who was also an introvert).

Extrovert: A person who is fine being alone, but gets her batteries recharged by being with people.

Introvert: A person who is fine being with people, but gets her batteries recharged by being alone.

What do you need when you are exhausted and are running on fumes? Do you need to be with other people, or do you need to be alone? As an introvert, I absolutely love being a teacher and being with people for several hours every day. But after a full day of teaching, I’m exhausted. I feel like I’ve run a marathon (or at least I feel like I think I would feel if I could run a marathon). Jeanne knows that when I get home at the end of the day, what I need most is to be alone in our little library room for a while or to veg out in front of mindless TV. I love being with people, in other words, but it exhausts me.

Jeanne is as extroverted as I am introverted. She works from home by herself, interviewing applicants to veterinary on Skype or Zoom. She reports that on occasion she needs to take some time to go to the grocery store even when we don’t need anything, just so she can be with people for a little while. It takes all kinds.

According to the Myers/Briggs personality test, I’m in good company with my particular type of introversion. I’m an INFJ—other famous people with INFJ traits include MLK Jr., Nelson Mandela, Mother Teresa, and Lady Gaga. But the Myers/Briggs website fails to mention the most influential and important introvert of all: Jesus. How do I know that Jesus was an introvert? All I can say is that it takes one to know one. This morning’s gospel reading is a case in point.

There are few chapters in the Gospels in which more happens than in Mark 6. It’s enough to keep the lectionary selectors busy for a full month.

Jesus is surrounded by multitudes over and over again in Mark 6; notice how he processes his growing fame.

First, Jesus knows how to delegate; realizing that he cannot do everything himself, he empowers the disciples by taking the training wheels off and sending them out to spread the good news in pairs. When the disciples return with plenty of exciting stories to tell about their initial forays into the countryside carrying the message and power of God’s love, he invites them to “Come away to a deserted place all by yourselves and rest a while.”

There’s no reason to think that all of the disciples are introverts—Simon Peter strikes me as an extrovert, for instance—but Jesus knows that for some, at least, solitude and quiet are needed in order to recharge. Next week in the gospel reading from John, after the miracle of feeding the 5000, Jesus once again withdraws by himself to a solitary place, intending to catch up with the disciples later as they sail across the Sea of Galilee. He does so by walking on the sea in the middle of a storm.

Despite evidence that Jesus was often exhausted by extended engagement with large groups of people, he undoubtedly knew that his ministry, for however long it lasted, would involve just that. And he never sought to avoid it. Why does he not withdraw and become a hermit or a guru that people have to come to? Because he has compassion for the multitude. According to today’s gospel, he saw that those thronging about him “were like sheep not having a shepherd.”

The Bible is full of sheep and shepherd texts, from Psalm 23 to Jesus’ parable about the shepherd who seeks and finds a single lost sheep. As a youngster, I always bristled at the frequent Biblical comparison of human beings to sheep, because I knew (or had read at least) that sheep were both smelly and stupid. My resistance to being called a sheep was reinforced when our youngest son Justin, who spent several years working as a veterinary technician, reported that sheep were his least favorite animal he ever had to deal with. Goats apparently are interesting, but not sheep.

It is not a compliment when a group of people are referred to as a “flock” or as a bunch of sheep. Sheep are mindless followers with little independent thought; people who mindlessly follow a political agenda or leader are often disparagingly called “sheeple.” But in the summer of 2018, Jeanne and I spent 10 days on vacation in Scotland. This wonderful week and a half began to change my opinion of sheep, providing some new possibilities for why Jesus likens us to sheep so often. One of my prized possessions, purchased on that vacation, is a Harris Tweed wool cap. I bought it in a small shop in Oban, a beautiful port on the west coast of Scotland that is the gateway to the Hebrides islands (where they make Islay single malt scotch, the real reason we went to Scotland in the first place). I wear this cap to work frequently when it isn’t hot and am pleased to report that I have managed not to lose it yet, although it has gone temporarily missing a few times.

Once at the beginning of an oral exam, I set my cap on a nearby bookshelf and asked my colleague and the student who had just arrived for her exam not to let me forget my cap when we were done, noting that “I can’t lose this hat. It’s from Scotland.” “Is it made out of wool?” my colleague asked; upon finding out that it is, he reported that “it’s waterproof then—wool is naturally waterproof.”

I estimate, conservatively, that Jeanne and I saw about seven billion sheep in our ten days in Scotland. Actually, according to 2019 numbers, there a bit over one million more sheep in Scotland than people. Sheep were everywhere, including across the road from two of the B and B’s we stayed in, as well as along the side of (and sometimes in the middle of) virtually every road that we drove on the wrong side of.

I don’t recall that we ever saw a shepherd. We experienced all sorts of weather, as one expects in Scotland, and saw sheep out in the middle of all of them. When I asked someone about this, she seemed surprised by the idea that sheep might need constant shepherding. Most of the sheep Jeanne and I saw had a some sort of symbol on their rear flank for identification purposes—these “brands” had clearly been spray painted on the unfortunate animal. Finally, sheep in Scotland are clearly for wool growing, not eating. I don’t recall seeing mutton or lamb chops on the menu at any of the restaurants we visited.

Our experience in Scotland revealed several features of sheep that make the God-as-shepherd-and-we-as-sheep metaphor very interesting. Sheep are tough and resilient. A shepherd can stick his or her sheep out in a pasture, mark them as his or her own, then walk away—apparently for days or weeks at a time. Sheep don’t need constant pampering and attention. They are naturally equipped to survive all sorts of weather, all the time slowly but surely growing the wool that is, after all, the primary purpose of their existence.

If God is the shepherd and we are the sheep, we can expect to be left alone and to have to rely on our own devices for long stretches of time. But the slow work of growth and productivity continues reliably whether the divine shepherd is in the pasture or not. As the sheep of God’s flock, we are naturally designed and intended to be useful and productive in all sorts of ways, no matter what the circumstances are, and regardless of whether it seems as if nothing is happening and that the shepherd has left for good. The shepherd knows that we are both tougher than we think we are and are a lot more valuable than we might appear. And when the storms come, as they always will, the shepherd knows that we can handle that as well. Sheep are waterproof, after all.

A night with Lot in Sodom,...
slacktivist
Books by This Author Books by Vance G. Morgan