Roofs, Vineyards, and the Kingdom of Heaven

Roofs, Vineyards, and the Kingdom of Heaven July 21, 2020 vancemorgan

Last Wednesday, after three delays (one our fault, two their fault), our house got a new hat. We have known for a couple of years that our roof needed to be replaced. We bought the house 24 years ago; the roof had been replaced the year before we purchased the house, so this was a first-time experience for us. Upon hearing about the event, a friend posted on Facebook that getting a new roof is like getting new tires on your car. Very necessary, very expensive, and no one knows that you did it except you. And now all of you as well. 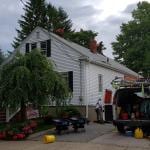 Around 7:00 on Wednesday morning, a van pulled up in our driveway. While they waited for the dumpster to arrive, the five guys got out and started unloading. Jeanne, as is her custom, immediately started asking them if they needed anything. Coffee? Water? Breakfast? After providing coffee for four of the guys and orange juice for the one non-coffee drinker, things got started. We have a small house, so it was a one-day (roughly twelve hour) event. Jeanne provided bottles of water for everyone mid-morning, then jumped in the car to run to the bank. Upon returning, she put an equal amount of cash (a significant amount of it) in five different envelopes, sealed them, and wrote “Gracias” on each—an additional “thank you” for each man’s hard work to be distributed at the end of the day. 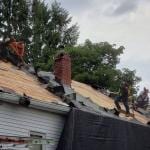 “Wait a minute,” you say. Why is your wife giving the roof guys envelopes of cash in addition to whatever hourly wage they are making? Getting a tip for doing your job might be expected in the food service industry, but for roofers? My explanation: Jeanne is the most generous person I have ever met. Period. Furthermore, she would simply say “I’m Italian! I take care of people!” It’s her language of love.

Toward the end of the day, Jeanne noticed that at some point an extra roof guy had showed up—neither of us noticed when. “Do you have a ten-dollar bill?” she asked me. “I have to make envelope for this other guy, and I’m $10 short.” After she gave everyone their envelope, she laughed that “This is like the crazy vineyard owner in the parable who pays everyone the same thing at the end of the day, no matter how many hours they worked!” 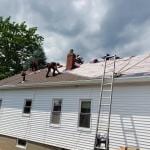 Indeed, it was. I have the opportunity to use this parable, one of my favorite New Testament texts, in seminar every fall with largely parochial-school educated freshmen who are under the false impression that they pretty much know everything that they need to know about the Bible. In Matthew 20, Jesus says that “the Kingdom of Heaven is like” a crazy vineyard owner who pays everyone the same daily wage no matter how long they have worked, from a full day’s labor to just an hour or so. The workers aren’t unionized, it is clearly a “supply and demand” and “hire and fire at will” situation, so what is going on? What is this vineyard owner up to?

The situation described has a very contemporary feel to it. People out of work gather at an agreed location, hoping that they will be one of the few picked when bosses with work available arrive at the crack of dawn. Those looking for work might not have proper documentation, might be illegal immigrants—whatever their situation, they are not blessed with the security of regular employment. The vineyard owner or his representatives arrive at dawn, agree with the handful selected to work for an agreed upon wage for their day of labor, and those who are not selected are left unemployed for yet another day. But the harvest is ready to be gathered, and the owner returns every three hours, at 9:00, at noon, and at 3:00, hiring more workers each time. Even at 5:00, a few more are grabbed from the marketplace to help make a final push in grape-harvesting for the last hour of the work day.

Only when wages are paid at the end of the work day do things get weird, as the vineyard owner pays all of the workers the same amount of money, no matter how long they worked. Why does he do this? Is it because, as my students suspected, he has bought into a social and economic experiment that forces him to pay everyone the same, no matter how hard or long they have worked? No—when he responds to the complaining laborers who have worked all day and have just been paid the same amount of money paid to the one-hour people, it is clear that this is no economic innovator or radical:

So why does he distribute wages in such a non-capitalistic way? In the Kingdom of Heaven, which is the kingdom that it is the responsibility of all of us who profess to follow Jesus to establish on earth now, familiar rules are not eliminated. Rather, they are transformed. With Kingdom of Heaven eyes, the vineyard owner sees something more important than profit—he sees that at the most basic level, all human beings share the same needs. A daily wage is meant to meet daily needs—and each person has these needs regardless of how long they work. The vineyard owner never asks why his workers were unemployed, nor does he ask why some of them were not available for work until late in the day. These details simply do not matter.

In the Jewish scriptures, the prophet Micah asks a basic, crucially important question: What does the Lord require of us? He then provides an answer so direct, so seemingly simple, that it always jerks me up short.

July 23, 2020 I'll See It When I Believe It
Recent Comments
0 | Leave a Comment
"There was a movie some decades ago (which spun off into a TV series) about ..."
Neil Brown A Modest Proposal: Should My Time ..."
"First of all…GREAT article on a subject that already interests me…Personally I have seen things ..."
Charlie Rivers The Truth Will Mess You Up
"I always love it when people quote random scriptures out of context. Now explain what ..."
Vance Morgan Faith Is About Asking the “What ..."
"The FallNow the serpent was more crafty than any of the wild animals the Lord ..."
AM Faith Is About Asking the “What ..."
Browse Our Archives
get the latest from
Freelance Christianity
Sign up for our newsletter
POPULAR AT PATHEOS Progressive Christian
1