For the past several years, I have had the privilege of giving a sermon at the Episcopal church I attend during Advent season. Four years ago, I gave this sermon; I called it “Righteous Peace, Godly Glory.”

Over the past several weeks I have been working through the second draft of my current sabbatical book project; as I completed each chapter draft I had Jeanne, who is my “go to” reader for everything, to give me her impressions. After finishing one chapter she said that she liked it overall, but thought that I should rework the first section because it was “too depressing.” I made the suggested changes, replacing the opening section with something more upbeat and deciding to move the depressing part to today’s sermon.

Don’t worry–it gets better at the end.

Jeanne, who manages to be on the road every time I am giving a sermon,  got on the Amtrak early one Sunday morning a couple of years ago, beginning two weeks of work-related travel. Bummed out, I decided to head south for church an hour and a half early in order to spend that extra time in the River’s Edge coffee shop just down the street, reading and doing my introverted thing. My text for the morning was Herodotus’s Histories, the primary text for the coming week’s Development of Western Civilization freshman seminars.

Herodotus is considered to be the first true historian, but historian or not, he’s a great story-teller. His “history” is often page after page of anecdotal tales about strange and distant lands, stories based more on second-hand rumor than direct observation. Consider, for instance, his description of a certain Thracian tribe’s practices at the birth of a baby:

When a baby is born the family sits round and mourns at the thought of the sufferings the infant must endure now that it has entered the world, and goes through the whole catalogue of human sorrows; but when somebody dies, they bury him with merriment and rejoicing, and point out how happy he now is and how many miseries he has at last escaped.

That’s a sixth-century BCE version of “life’s a bitch and then you die,” codified into the very fabric of a culture. The first stop on Jeanne’s two-week travels was to visit New Jersey briefly to help celebrate the first birthday of her great-niece with her family.

Something tells me that Emma’s first birthday was not marked with a recitation of “the whole catalogue of human sorrows.”

But if brutal honesty were the rule of the day, perhaps her Emma’s first birthday celebration should have been so marked. The ancient Greeks, Herodotus included, understood better than any group of people before and perhaps since the often tragic tension that lies just below the surface of human life. In Aeschylus’s Oresteia, the trilogy of plays that was the previous week’s focus with my DWC freshmen, we encountered the horribly messy history of the house of Atreus, undoubtedly the most dysfunctional and f–ked up family in all of literature. In the midst of this powerful and tragic work, Aeschylus occasionally reminds us that tragedy and pain is not just part of myth and legend—it is an integral part of the human condition. We must, Aeschylus writes, “suffer into truth.”

It’s not as if we need regular reminders of how a seemingly benign and beautiful world can turn dark at a moment’s notice. Just a year ago, on the day before Thanksgiving, a colleague at Providence College was killed far too soon in an automobile accident. 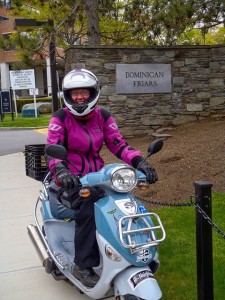 I’ve told people frequently since that time that if, out of the hundreds of faculty and staff on campus, I made a list of those persons who everyone liked and respected, Siobhan would have been at the top of the list. Truth be told, she might have been the only name on the list. Siobhán was the college’s Instructional Technology Development Program Coordinator, a position that put her in charge, among other things, of bringing the faculty into the twenty-first century technologically (after guiding them first through the nineteenth and twentieth centuries).

Over the years I had dozens of interactions with Siobhán both in person and via email, sometimes asking for help with something that a two-year old probably would know how to do, other times asking for advice concerning what new technology might be useful and user-friendly for the faculty in the program I direct. She always had the answer, delivered both in language that I could easily understand and without a hint of condescension or impatience (even though I undoubtedly deserved both). Often Siobhán provided solutions for the next eight problems to follow that I didn’t even know about yet. She was gracious, creative, generous, funny, and had a smile that lit up every space she entered. I pride myself in responding to emails quickly, but Siobhán was the fastest I have ever encountered. I once complimented her on her immediate helpfulness; she responded “That’s because I like you!” I asked “What do you do to people you don’t like?” “I make them wait a week.”

During the days and weeks after Siobhan’s death, everyone on campus wasin shock. How could such a wonderful person have been killed in a freak accident while still in her thirties? On the Friday of the first week after we returned from Thanksgiving Break, a memorial service for Siobhan was held on campus. As I settled into my seat in the chapel with the several hundred persons who closed offices and cancelled classes in the middle of the day to honor Siobhan and celebrate her life, 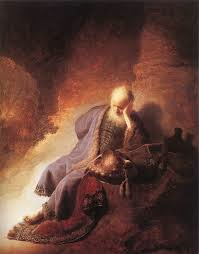 I noticed in the program that the Old Testament reading was from Lamentations. “That’s appropriate,” I thought. “At least there’s nothing in Lamentations that will give us the unwelcome advice that we should not feel the devastating loss and sadness that we feel.”

If you are not familiar with Lamentations, it’s probably just as well—it is undoubtedly the most depressing text in the Jewish scriptures, perhaps anywhere. I came face to face with it when on sabbatical several years ago. Of the many liturgical celebrations I participated in at St. John’s Abbey in Minnesota, the most striking is the Good Friday morning prayer service. At 7:00 in the morning, the service sets the tone for the day as a solitary monk chants the entire book of Lamentations, a litany of five poetic dirges over the destruction of Jerusalem.

Traditionally attributed to the prophet Jeremiah, the tone of the poems is bleak: God does not speak, the degree of suffering is presented as undeserved, and expectations of future redemption are minimal. In Psalm 129 the Psalmist writes “Plowmen have plowed my back and made their furrows long”—Lamentations is page after page of that sentiment. Except for a passage right in the middle of the book I had forgotten about, a place where for a moment Jeremiah comes up for air—the very passage read at Siobhan’s funeral.

Advent is the season of expectation and hope, energized by the desire that we can be better, that “life’s a bitch and then you die” need not be the final word concerning the human story. The Incarnation that Advent anticipates is the beginning of this narrative; the promise of Advent is that a glimmer of light in the distance is about to dawn. 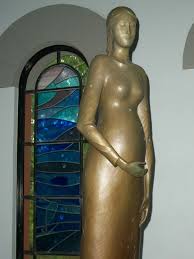 Advent’s strongest image is pregnancy. Elizabeth’s . . . Mary’s . . . so unexpected, so miraculous. A distant, long-promised hope is about to literally be fleshed out. As we turn our attention away from our obsession with the human condition toward distant promise, we choose to believe that when the divine takes on our human suffering and pain, we in turn take on divinity itself.  The choice to look outward in expectation is within our power, as described in Baruch:

Take off the garment of your sorrow and affliction, and put on forever the beauty of the glory from God. Put on the robe of the righteousness that comes from God; put on your head the diadem of the glory of the Everlasting; for God will show your splendor everywhere under heaven. For God will give you evermore the name, “Righteous Peace, Godly Glory.”

The phrase “It’s always darkest just before the dawn” is usually little more than a platitude, but in this case it makes sense. We have reason to hope, because help is on the way.

December 3, 2019
The Incarnation in a Post-Truth World
Next Post

December 5, 2019 How to tell the difference between elitism and knowing WTF you are talking about
Recent Comments
0 | Leave a Comment
"Thank you for your thoughtful insights."
Vance Morgan White Privilege on Parade
"cry baby."
Brandon Roberts White Privilege on Parade
"The values I see in Christianity today, are the exact opposite of those I was ..."
Willow Rose Noah and his Children: Bad New ..."
"What exactly is racist or bigoted about identifying a group by their accepted label - ..."
Willow Rose Noah and his Children: Bad New ..."
Browse Our Archives
get the latest from
Freelance Christianity
Sign up for our newsletter
POPULAR AT PATHEOS Progressive Christian
1