Staying Sane During the Impeachment Trial

The other day somebody wrote on Twitter that “President Trump is the best president in my lifetime.” I responded that “You must be three years old.”

That’s my dominant attitude in the middle of, as the lead into every 24/7 wall-to-wall news coverage segment reminds us, “The Impeachment Trial of Donald John Trump” (my oldest son is annoyed that he shares his middle name with this president). It’s a good thing for my sanity that my work schedule on campus makes it impossible to watch any of the proceedings live during the day. I choose not to watch the evening session even though I could, simply because I prefer for my heart rate to be below 120 (and because Jeanne wouldn’t let me—she would confiscate the television remote). 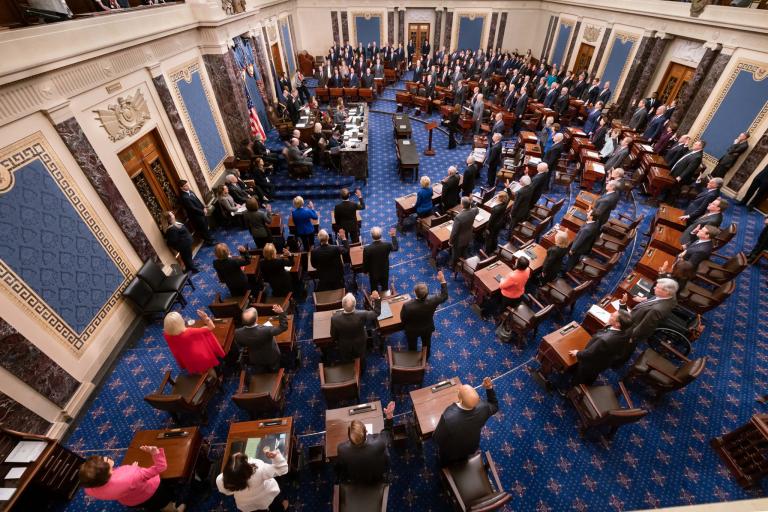 Instead, I check in occasionally with my favorite biased news network at the times when the senators tend to take a break, allowing a panel of folks who get paid lots of money to watch this stuff wall-to-wall to summarize and provide highlights. Or lowlights, when mentioning that one senator fell asleep, another is doing crossword puzzles and making paper airplanes, others are wandering around while complaining that they are bored, and still others are finding some way to send out snarky tweets in favor of the accused, even though the senators are supposed to be in an electronics-free zone while the trial is on.

I want to be informed. I want to believe that all of this matters and that Jesus himself might make an appearance in the hopes of making an impression on a few of Trump’s senatorial sycophants. But I’m not sure that any of this will actually matter in the long run, and I’m quite sure that Jesus has better and more important things to do.

I’m glad that I’m teaching an Honors colloquium on Michel de Montaigne this semester, because his voice of wisdom, intelligence, open-endedness, and commitment to a reasonable resting heart rate helps a great deal. In the middle of the 16th century French Wars of Religion, a time in which moderation, balance, reason, and intelligent discussion were in even shorter supply than they are today, he wrote this toward the end of his life:

Thanks, Michel, I needed that. Montaigne wrote that passage when he was in his middle fifties; if he had lived to the sixty-three years that I now have under my belt, he would have received confirmation of just how important this commitment to preserving his inner peace at all costs becomes as one gets older.

There are some interesting parallels between Montaigne’s 16th century France and the U.S. in the 21st century. The 16th century in Europe began with a great deal of promise and optimism. The literature, art, philosophy, and science of the Renaissance had opened doors of possibility for human achievement never before dreamed of. The Reformation opened up new hopes for religious freedom and tolerance. Discovery and exploration were expanding everywhere. The prospects for human progress and excellence seemed unbounded.

But just as an ocean wave that rises to unexpected and glorious heights eventually crests and crashes, so elements of the Renaissance and humanism that first seemed so hopeful turned out to be poisonous. The Reformation sparked unrestrained barbarism in the Wars of Religion that encompassed all of Montaigne’s adult life. Similarly, over the past few years, an optimism that millions felt with the election of a vibrant, young African-American man as President has, with remarkable speed, dissolved into polarization and ugliness, racism and misogyny, as well as complete disregard for moral, legal, and constitutional norms that many of us thought were secure.

Montaigne’s Essais, the primary text in my colloquium this semester, is an extended engagement with how Montaigne—who, for all of his brilliance and fame, was just an average guy trying to find his way through difficult times—sought to find peace and centeredness in the middle of a world that was pushing everyone to go crazy in many directions at once. What I want my students to discover in Montaigne, as I have found in the Essais for years, is why this incomparable man of letters, more than four centuries dead, matters now in moral terms and how, in an intolerable period of history, Montaigne showed better than anyone else that one could still remain free.

Stefan Zweig, a Jewish writer and refugee from the Nazis whose lengthy essay from the 1940s on Montaigne is perhaps the best I’ve ever read, lists the following as some of the questions that Montaigne is asking himself:

There is something eerily relevant about these questions to our current situation—the questions could have been written down yesterday rather than well over 400 years ago.

It takes a conscious decision and a certain amount of courage to stay centered and sane in a world of polarization, fake news, refusal to compromise or even dialogue, and tweet storms. Comparing the stresses and challenges of his own life and times with Montaigne’s, Zweig writes that

Only a person who has lived through a time that threatens his life and that valuable substance, his individual freedom, with war, power, and tyrannical ideologies—only he knows how much courage, how much honesty and determination are needed to maintain the inner self in such a time of herd insanity.

Each of us has the capacity and the resources necessary to prioritize and to choose not to bite our fingernails to the quick out of stress, anger, or fear.

One of my own primary resources is my faith, an often unexpected source of peace, considering that so often religion serves to polarize, leads to judgment and superiority, and inspires violence both virtual and real. When I repeat “truly I have set myself in silence and peace; as a weaned child at its mother’s breast, so is my soul” from Psalm 131, a passage that has become an important mantra of sorts for me over the past decade, I gain access to a space in which the latest invitation to set my hair on fire and wish violence upon those with whom I disagree so intensely no longer is compelling.

When I was young, Jesus’ famous soliloquy about “consider the lilies” inspired a “whatever” in me at best. Nowadays it strikes me as one of the wisest things Jesus is reported as having said. It’s his way of reminding us that most things are not worth biting our nails or losing our peace over.

January 28, 2020 When to Care, and When Not to Care
Recent Comments
0 | Leave a Comment
Browse Our Archives
Follow Us!