Bleary-eyed at the 8;00 service yesterday morning, I noticed that a reproduction of the above familiar yet peculiar painting was propped up on a stand at the base of the reader’s lectern. Shortly thereafter, the Old Testament reading for the morning–the following familiar passage from Isaiah–nudged me into awareness:

The painting is one of many versions of “The Peaceable Kingdom” by 18th century Quaker artist Edward Hicks. Hicks’ artistic rendition of Isaiah’s vision is complete with rather flat representations of all the above animals plus three children, all hanging out on a grassy knoll with pop-eyed and glazed looks that have all the earmarks of drug inducement. The promise of the day’s Advent readings was a future world of peace where natural enemies will no longer be enemies. Drugs are one way to produce peace, I suppose. 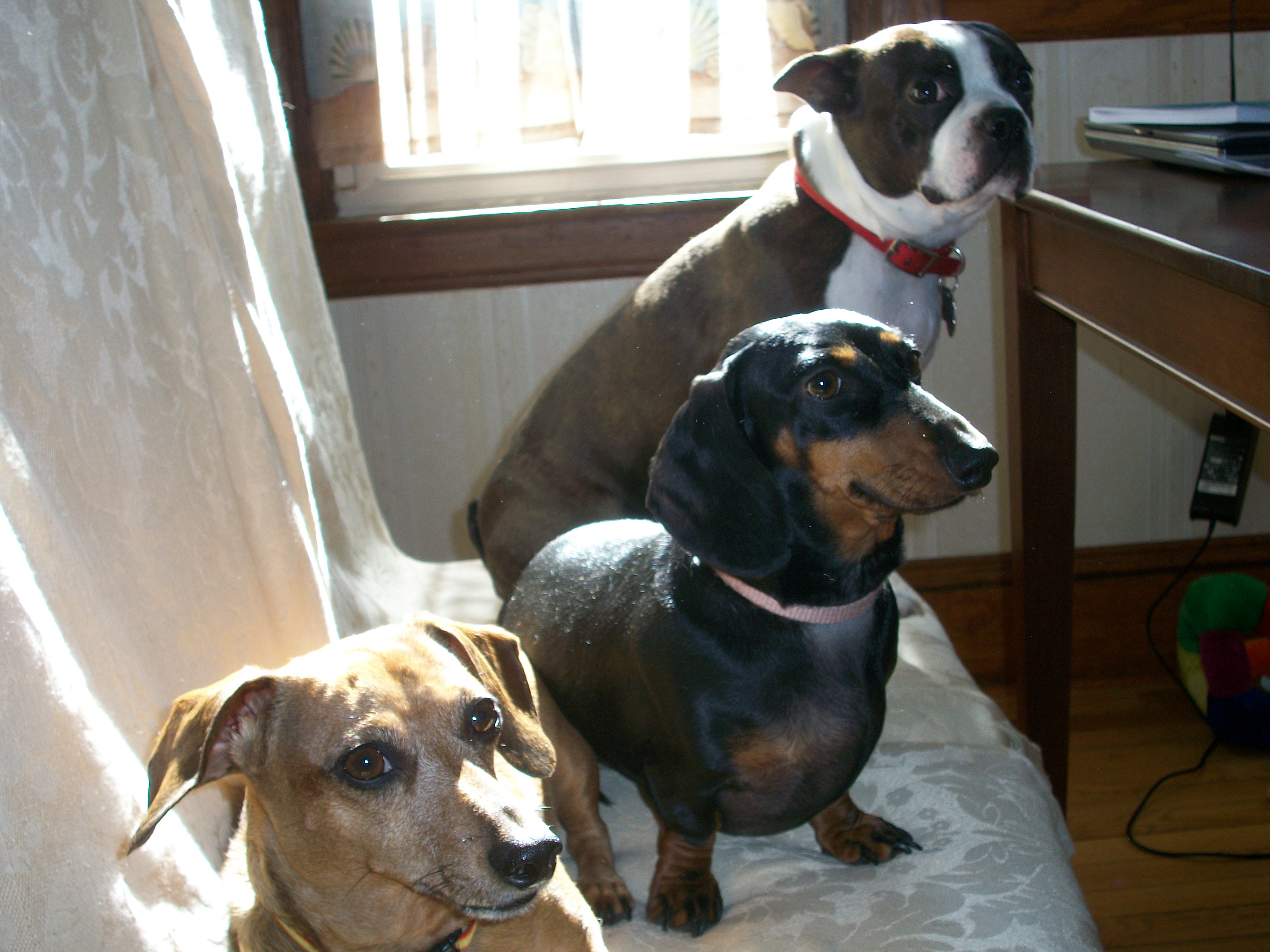 At home we have a less diverse menagerie of beasts than Isaiah’s. Our group consists of two dachshunds—fifteen pound tubular bundles of extroverted energy—and a Boston terrier who is badly in need of a psychotherapist. A new friend who has never been to our house, upon hearing my description of our canine trio, said “well just make sure that they know who’s in charge.” To which I replied “oh there’s no doubt about who’s in charge—they are.” Although Jeanne and I love our four-leggers, let’s just say that peace is in short supply on the home front.

Lacking Isaiah’s prophetic powers and Hicks’ drugs, we tried something else not long ago. On a friend’s recommendation, Jeanne purchased a CD called “Through a Dog’s Ear,”

a collection of piano arrangements of classical music that, according to the CD jacket, have been selected precisely to soothe and quiet even the most hyperactive dachshund and anxiety-ridden terrier. The companion website says that the CD “is recommended for when you want your dog to rest, when your dog is left alone, or when anxiety or excitement in your dog is anticipated — thunderstorms, fireworks, or the arrival of guests.

” Most of the music is Mozart (also good for silencing babies and making them smart), along with some Bach and a bit of Beethoven.

We hoped that this CD would be useful when we want the dachshunds not to bark at people walking their dogs a quarter-mile away, or at me when I open the back door after being outside for thirty seconds taking out the garbage. Maybe it would even lessen the likelihood of Boston terrier incontinence and cardiac arrest when a male human being (especially me) is within ten feet.

We put the CD on the stereo and pressed the 24/7/365 button (I’m glad I love classical music), just to see what would happen.

Although Jeanne thought the music made the beasts sleep more. I can’t say that I noticed a lot of difference in them. I did, however, find that I felt lazier than usual.

This same passage from Isaiah was one of the readings a few years ago for a service focused on an international day of prayer for peace. I suspect that such days were established with something more than canine tranquility in mind. Another of that morning’s readings was from Isaiah, who in chapter 2 invites us to go to “the mountain of the Lord” where, at some unspecified future time, the Lord will reign supreme and human beings will be acting quite differently than we do now.

They will hammer their swords into ploughshares, their spears into sickles. Nation will not lift sword against nation; there will be no more training for war.

Whatever Isaiah was seeing in this memorable vision, it sure isn’t the present. Although the writer of Ecclesiastes says there is “a time for war, and a time for peace,” the time for war has stretched for as long as human existence, and its end doesn’t appear imminent.

That’s probably why, in the religious tradition of my youth, we considered Isaiah’s peaceable kingdom either to be a description of heaven itself, or of God’s millennial kingdom of one thousand years which would occur after the second coming of Christ and the tribulation in which, after a lot of violence and judgment, the bad guys would be destroyed and only we good guys would remain. When we prayed “Thy kingdom come, thy will be done,” we really meant “Please come back soon and rescue us from this totally crappy and ruined world in which we live.”

So what am I supposed to be praying for on the day of prayer for peace and every other day? What can I do to help bring about world peace? Put “Visualize Whirled Peas” and “Who Would Jesus Bomb?” bumper stickers on my car?

Commit random acts of kindness? Sing “Give Peace a Chance” along with John and Yoko? Play Mozart tunes as loudly as possible? Why not just spit into the wind and be done with it?

One possible place to begin is to remember that the Kingdom of God for which we pray, the Peaceable Kingdom, is here. “The Kingdom of God is within you.” The peaceable kingdom, the kingdom of heaven, begins in me, just as every one of Isaiah’s beasts is in me. I am a wolf, a lamb, a leopard, a goat, a calf, a lion, a cow, a bear, an ox, an adder, and an asp, as well as some other things Isaiah didn’t mention. There is probably a dachshund and a Boston terrier in there too. And, lest I forget, both a nursing child and a weaned child.

The key to establishing a peaceable kingdom within me is not to tame the scary beasts and put the fuzzy and cuddly ones in charge. Rather, it’s welcoming them all, allowing each their place, and not getting nervous when the lion and lamb decide to sit next to each other. To cite another John Lennon song, “Let It Be.” As I welcome and release each of the beasts, I commit myself, at least for today, to listening to as much Mozart as possible and following the example of the psalmist in Psalm 131:

Truly I have set my soul in silence and peace. As a weaned child on its mother’s breast, so is my soul.

December 14, 2013 The Great Homesickness
Recent Comments
3 Comments | Leave a Comment
Browse Our Archives
get the latest from
Freelance Christianity
Sign up for our newsletter
POPULAR AT PATHEOS Progressive Christian
1