The Real War On Christmas

A few days ago I stumbled across one of the most remarkable tweets I have encountered in my limited experience with Twitter. A friend retweeted something from the Twitter feed of 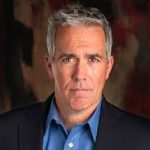 Joe Walsh, a former Illinois congressman turned conservative talk-show host, who had this to share:

If Jesus was back among us, he’d be a law-abiding gun owner. He’d support the Police. And he’d say “Merry Christmas” not “Happy Holidays.”

This, of course, led to a number of creative responses, including

The best I could come up for my own response was

Apparently, Joe Walsh is imaging a Jesus ready to actually fight in the “War Against Christmas” that certain folks annually claim is being fought by political and social liberals such as myself as part of a continuing effort to make atheism the religion of the land.

A recent salvo in the war against the war on Christmas a couple of years ago was Sarah Palin’s Good Tidings and Great Joy: Protecting the Heart of Christmas. I won’t be reading this book, but I’m quite confident that I know the general thrust of her argument, if she bothers to have one. Liberal atheist grinches are out there trying to steal our crèches, monitor our language so that we will be embarrassed to say “Merry Christmas,” be forced to say something insipid like “Happy Holidays” or “How are you doing during this lovely Holiday season?” and make it a thought-crime to think about the baby Jesus. I find this paranoia amusing, sad, or maddening depending on my mood. If one’s faith is rattled by such matters, one has larger issues to confront than the possibility that not everyone shares one’s faith. The Incarnation that I celebrate at Christmas is at the center of what I believe concerning God—whether an oversized fake baby with a halo and pious expression gets to lay in a manger while observed by other pious statues and animals on the front lawn of city hall doesn’t have much effect on that belief.

This is not to say, however, that I deny that Christmas is under attack. It is, at least on two fronts. One of them is obvious—all you have to do is walk into any store where you can buy something between Halloween and January 1. 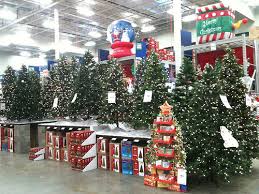 One Saturday in the middle of November, I needed a package of large paper lawn-and-leaf bags as I cleaned leaves from our tiny yard. Upon entering the Lowe’s a mile away and heading for the place where blowers, bags and rakes were two weeks ago when I bought bags the last time, I was immediately disoriented. Autumn leaf-control tools and accessories had been replaced by mass quantities of the worst that commercial Christmas has to offer. Fake trees, gaudy and tasteless lawn decorations and tree ornaments had taken over the right front quadrant of the store, supported by the ever-offensive strains of Xmas muzak in the background. WHAT THE FUCK!!!??? I thought, as I do every year in November when I am smacked in the face by the Ghost of Capitalist Christmas for the first time in the season. Halloween was just two weeks ago! Thanksgiving isn’t for another ten days! Thanks for making me hate Christmas all over again, Lowe’s!

I’m convinced that this is more than simple capitalism run amuck. There’s something sinister lurking behind the scenes. Everything we see and hear at the end of each calendar year is designed to convince us that we need to buy a bunch of stuff we can’t afford in order to prove our affection for people in our lives, all overseen by a fat guy with a white beard in a red suit. 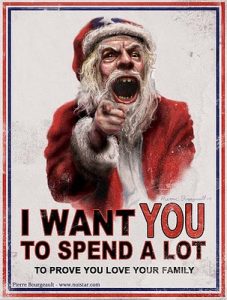 What more insidious undermining of an adult, vigorous, intelligent faith could there be—the divine turned into a fat guy with a beard who can be bribed by good behavior into fulfilling even the most trivial desires? A jolly elf who effectively seduces millions of people every year into believing that and behaving as if the best place to celebrate Christmas is in one of our contemporary cathedrals of worship— 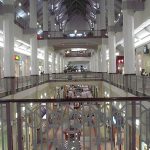 the shopping mall. Get thee behind me, Santa.

The war on Christmas has been underway for a long time, waged not by liberal, politically correct atheists seeking to undermine traditional values, but rather by the insidious and inexorable pressure to trivialize and commodify everything. The heart of Christmas is no more present in lawn ornaments, “Put Christ Back Into Christmas” slogans, and “Merry Christmas” lapel buttons than it is in the extravaganza of holiday paraphernalia that screams at me every time I drive down the street or walk into a store between Halloween and New Year’s Day. The heart of Christmas is in the silent mystery of the Incarnation, in the strange and beautiful ways in which the divine chooses to enter our world in human form on a daily basis. There are many ways to connect and resonate with the heart of Christmas—Santa is not one of them.

But there is another front in the war on Christmas, this one self-inflicted by those of us who claim to be Christian. In a recent interview with Krista Tippett on NPR’s On Being, Jesuit author and spiritual advisor James Martin spoke of how we have sanitized the Christmas story into something appropriate for polite conversation, crèches, cards, and movies. 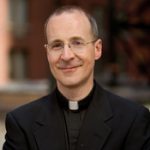 I think it’s been tamed. It’s not only been commodified and commercialized; it’s been tamed. It’s a nice, pretty story about two nice, good-looking people, usually white, who had a pretty baby in a manger. But in a sense, it’s a terrifying story in terms of what they had to undergo. And it’s also—I have to say—it is a shocking story. It’s not just a baby. It is God being born in human form. And it’s just as shocking as the resurrection. And I think we’ve tamed it. And in a sense, it doesn’t demand our belief. We can just kind of look on it, and say, “Well, that’s cute” . . . And I actually have to say, I am really getting to the point where I’m starting to loathe the Christmas season.

As I had the opportunity this semester to discuss some of the seminal texts of the Christian faith with my freshman students, I reminded them that at the heart of the Christmas story is an outrageously ridiculous, but beautifully attractive, idea: God chose to become human. God continues to engage with the world through humans. We have surrounded ourselves with all sorts of distractions in order to avoid grappling with a most basic truth: God loves us. That changes everything. And it doesn’t make me want to go to the mall or to church.

December 12, 2016 Constellations
Recent Comments
2 Comments | Leave a Comment
"Own it, become woke, and use white privilege to help open doors for non-white people. ..."
Zeigler John I’m White, I’m Privileged, and I’m ..."
"As another white Christian, I've also been looking for different things I could do, and ..."
Phil Ledgerwood I’m White, I’m Privileged, and I’m ..."
"I'm fond of this definition: a proposition is "true" to the extent to which it ..."
Illithid Does the Arc of the Moral ..."
"Why did "Jesus" tell stories?Because the men who invented (and for many centuries reinvented edited ..."
rationalobservations? Why Did Jesus Tell Stories? Because ..."
Browse Our Archives
Follow Us!

The liturgy of 'handicapped' parking spaces
slacktivist
Books by This Author Books by Vance G. Morgan 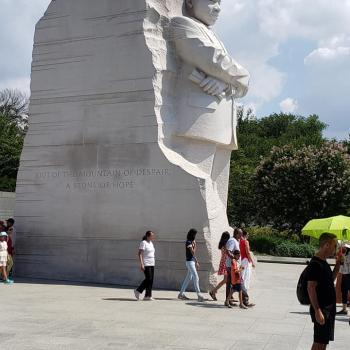