I saw a bumper sticker once that said

“So many books, so little time.” I agree. Even though I sometimes feel as if I read for a living, the fear that I might live my allotted fourscore years and never get to read the greatest novel I’ve not yet read or the most profound play that has not yet crossed my path is palpable. At age 59, for instance, I’ve not yet read all of Dickens’ novels.

That worries me. I’ve read most of them, but what if Little Dorrit or Martin Chuzzlewitt is better than Bleak House, my favorite? What if one of the handful of Flannery O’Connor short stories I’ve yet to read is more profound than “A View of the Woods”? What if I die without ever having read The Fairie Queen? Very disturbing.

I’ve chosen to address this fear systematically, by dedicating a central part of my summer reading list to one great author (by reputation) whose work I have never read. One summer it was Zola, another summer it was Trollope;

I even slogged through the first half of Swann’s Way and joined the legion of readers who started and never finished Proust. Three summers ago, it was George Eliot. I had read Silas Marner,but never Middlemarch or Daniel Deronda. I was pushed in the Eliot direction because a colleague of mine had told me that his wife, who is also a voracious reader, has proclaimed Middlemarch as the greatest novel ever written. I finished it a few days before a visit to The Coop with my son. My colleague’s wife has a point.

Cambridge, Massachusetts is a book lover’s paradise. There are more bookstores per square inch in Cambridge than any other town I’ve visited

, so many that I once even found a copy of my first book, a reworking of my dissertation, on an out-of-the-way shelf in the corner of an out-of-the-way little shop there. The only other place I’ve ever seen that book, other than collecting dust on my own bookshelf, is collecting dust in various libraries on college campuses I’ve worked at or visited. As David Hume said about his first publication, “it fell stillborn from the press.”

The central, largest bookstore in Cambridge is The Coop, an impressive establishment with several stories, balconies, nooks and crannies in which to sit and read—the sort of place I could easily spend a week’s vacation. Probably alone, though–I don’t think Jeanne could survive for more than a morning. Once while visiting the Coop with my youngest son, we walked past a table with a seemingly random collection of books on display. I picked up a copy of Middlemarch. Handing it to my son, I said “read the last paragraph.”

“I’d give my left testicle to be able to write like that,” I replied.

The paragraph he read was Eliot’s closing meditation on the remaining life of the main character, Dorothea Brooke.

Her finely touched spirit had still its fine issues, though they were not widely visible.

Her full nature, like that river of which Cyrus broke the strength, spent itself in channels which had no great name on the earth. But the effect of her being on those around her was incalculably diffusive: for the growing good of the world is partly dependent on unhistoric acts; and that things are not so ill with you and  me as they might have been, is half owing to the number who lived faithfully a hidden life, and rest in unvisited tombs.

Through Dorothea Brooke, Eliot inspires reverence for the sacredness of ordinary acts and feelings, bringing to mind the prophet Micah’s injunction to “do justice, love mercy, and walk humbly with our God.”

Dorothea, to the great consternation of her wealthy uncle and guardian, regularly looks for ways to improve the living conditions of the impoverished tenant farmers working the hundreds of family acres, treats everyone as her equal even though societal norms claim otherwise, and improves the lives of those she touches with her natural generosity and truthfulness.

Her gracious humanness is not religiously motivated; indeed, the only cleric in the novel is Dorothea’s ill-chosen and unfortunate first husband Mr. Casaubon, an academic so cerebral and lacking in affect that he regularly fails to recognize the real existence of anyone other than himself. The wellspring of Dorothea’s goodness is simply her own, expansive heart.

But the normal human constitution is not well tuned to the importance of ordinary deeds—all of us want to accomplish something magnificent, to perform historic acts, to live lives that are recognized, and to establish a great name on the earth. What is the value of attempting to live the life of virtue if no one notices? At the time I read Middlemarch I had not yet started this blog. I had written several dozen essays over the previous three years, both the vehicle and record of a spiritual awakening that was transformational. Family and friends had let me know, at various times and in various ways, that they were been touched deeply by them. But I wanted them to be published, and no publishing house had the good sense or spiritual acumen to take on the project. After the latest “thanks for sharing, but no” from a publisher, I said in exasperation to Jeanne “If these aren’t meant to be in print, what are they for?” As has happened so often over the past twenty-five years, she responded with the truth—“You may never know, and that’s alright.” In my thinking, the value of something is established by its being recognized. But perhaps in a different economy, value is measured in secret, even unknown ways. 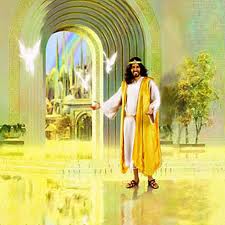 Matthew’s gospel, those who are invited to enter into the joy of their Lord are those who fed the hungry, clothed the naked, gave the homeless shelter, and visited those in prison, all the time unaware that by doing so, they were advancing the Kingdom of God. It’s almost as if they are surprised that simply acting out of human kindness and solidarity was enough to satisfy the divine requirements. But in a sacramental and incarnational world, it makes sense. What does the Lord require of us? Justice. Mercy. Humility. Perhaps I simply need to keep WWDD? in mind. What Would Dorothea Do?

June 5, 2015 Divine Stalking
Recent Comments
14 Comments | Leave a Comment
"You're welcome! Thanks for reading"
Vance Morgan Don’t Be Afraid to Die
"Thank you for this meditation. Very much needed."
Phil Ledgerwood Don’t Be Afraid to Die
"i think jesus was talking about the actual end of the world when he said ..."
crackerMF Jesus’ Advice Concerning the Coronavirus: Don’t ..."
"Be afraid. Be very afraid. https://uploads.disquscdn.c..."
Robert Conner Jesus’ Advice Concerning the Coronavirus: Don’t ..."
Browse Our Archives
Follow Us!