We Are the Hands and Feet of God

We Are the Hands and Feet of God December 19, 2020 vancemorgan

I begin with a couple of stories.

Story #1: There has been vigorous debate on my campus for years concerning what the real goals of the Development of Western Civilization program that I directed for four years, and have taught in for twenty-five years, are. Although my own ideas have evolved over the years, I’ve always been clear about what the goals are not. For more than fifteen years, I’ve been telling students to never treat this course as a museum tour. We’re not entering the ancient Greece or Rome wing of the Western Civilization museum and noting how interesting and odd the Greeks and Romans were, how different (and better?) we are. I usually tell the students that if there is nothing that we can learn from the texts we read that is relevant to us, if there is nothing we can apply to our lives now, if all we are doing is taking a museum tour, then we’re wasting our time.

Story #2: In one of my favorite movies, Amadeus, the brilliant but struggling composer Mozart has finally managed to get an audience with Joseph II, the enlightened emperor of the Austro-Hungarian empire. Joseph II is a great patron of the arts; Mozart knows that favorable notice from the emperor, as well as a commission or two, will make his career. As Mozart enters the audience room where the emperor and his fine arts cabinet await, he rushes to the emperor, kneels, and covers the emperor’s hand energetically with kisses. The emperor, obviously pleased, still replies “Mozart, Mozart, please! A little less enthusiasm, I beg you! It’s not a holy relic!”

I tell these two brief stories because I believe that over the centuries Christians, including those of us here today, have made two mistakes concerning Mary, the mother of Jesus. We have treated her either as a museum piece or as a holy relic. In the tradition I grew up in, we treated Mary as a museum piece. The only time I ever heard about Mary was around Christmas or if the text for the day was the marriage at Cana when Jesus is unaccountably rude to his mother. 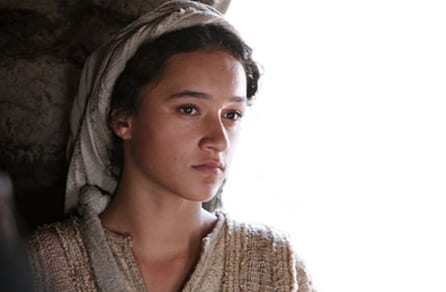 At Christmas, Mary showed up in the pageant. I remember in various Christmas pageants being the innkeeper, a wise man, a shepherd—all of the usual male roles. My most triumphant pageant appearance, though, was the year I got to be Joseph. Wearing a white dish towel on my head secured with a bathrobe belt, I gazed with a holy aspect at the plastic headed Jesus in the make-shift manger while the narrator read the Christmas story. Actually, I was gazing at Mary, played by Bonnie, whom I was planning to marry in 15-20 years. It was my usual pattern when I was in single digits of age. If I thought a girl was cute, I’d think “you’re cute—I wonder what our children will look like.” So, there was a Mary wing in the Baptist Christian museum of my youth, but it was small and uninteresting.

In other Christian traditions, such as the one in which my wife Jeanne grew up, Mary plays a slightly more central role. In these churches Mary often gets more face time in artistic representations than Jesus himself. Attention to Mary has evolved into complicated ritualistic forms which in some cases border on the cultish. You may remember a scene from the movie Godfather II in which a much larger than life, gold-and-jewel-encrusted statue of Mary is carried reverently through the streets of Manhattan as onlookers attach dollar bills to her. Jeanne tells me that such Mary-as-a-holy-relic events are by no means uncommon—if it’s Tuesday, it must be time for another Mary parade!

Because we have either placed her virtually behind glass or smothered her in ritual, Mary has been effectively hidden from us. But if Mary is neither a museum piece nor a holy relic, who or what is she?

From the few details in passages such as today’s gospel reading, joined together with what we know about the culture in which Mary lived, we can sketchily picture Mary. Mary is young, most likely twelve or thirteen years old. She is engaged to Joseph, a man much older than Mary, an engagement arranged between Joseph and Mary’s father. Mary is almost certainly poor. Her skin is darker than suggested in traditional artwork. She has dirt under her fingernails. We do not know whether she has siblings, nor do we know from the gospels anything about her parents. She’s nothing special, just an insignificant young girl living in a nothing town in the eastern backwater of the Roman Empire. And she is visited by an angel.

We are all too aware of our humanity, of our shortcomings and failings, that we bear the burden, as John Henry Newman wrote, of “some aboriginal calamity.” But we are also the bearers of the divine. The promise of incarnation is that God chooses, inexplicably, miraculously, to inhabit flawed and imperfect matter, to become human. The promise to Mary is the promise to us—the Lord is with us. We, as Mary, are the wombs from which the divine enters the world each day. We are the incubators of God.  Mary’s response to Gabriel is the only one possible—“How can this be?” It is a mystery. It is also a great story.

When Mary gathers herself sufficiently to comment on the angel’s announcement after he leaves, she begins in the right place. “For he has looked with favor on the lowliness of his servant. Surely, from now on all generations will call me blessed.” Mary is saying that “I’m nothing special. I’m just a garden variety human being. But the divine has showed remarkable and glorious favor toward me and has bestowed abundant blessing on me by choosing to inhabit me.” There is only one possible reason for this favor, because Mary knows that she has done nothing to earn it. This reason is love.

Love is holy because it is a lot like grace—the worthiness of its object is never really what matters. The astounding mystery and wonder of God’s love for us permeates throughout the beautiful story of the Annunciation. This favor and blessing continues. The incarnation narrative—the story of God becoming flesh—is a direct response to our inherent flaws, imperfections, limitations, and evil. Divine favor and blessing is offered to all of us. And the status of humanity is raised when God inhabits it. I remember singing a Sunday School song as a child that included the lines “we are his hands, we are his feet.” That is the mystery, the scandal, and the beauty of the incarnation story: God entrusts flawed human beings to be the divine in the world.

One final story. At St. John’s University and Abbey in Collegeville Minnesota, Benedictine priest Godfrey Diekmann was a rock star. He and his mentor, Fr. Virgil Michael, were perhaps more responsible for liturgical reform and renewal in the Catholic Church than any others. When I was a resident scholar at an ecumenical institute at St. John’s in the Spring 2009 semester, I heard many Godfrey Diekmann stories—his wit as well as his temper were legendary. My favorite of these stories might be apocryphal, but I heard it so often that I suspect it is true.

One evening while eating with colleagues and students in the student dining room, Diekmann got involved in a spirited conversation about the heart of Christian theology and life. He startled those at his table as well as those within earshot by slamming his hand on the table and shouting “It’s not the Resurrection, god-dammit! It’s the Incarnation!” As students, stunned into silence, slipped away he added “But we don’t believe it. We don’t believe that we are invited to become the very life of God.” 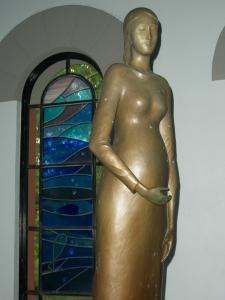 The Christmas we anticipate—that is incubating in each of us this morning—is the moment of salvation as God enters time, history, and each of us.

Advent’s strongest image is pregnancy. Elizabeth’s . . . Mary’s . . . so unexpected, so miraculous. Advent reminds us that in our lives there is always a child ready to enter the world—the divine child that is in each of us and the child of God that each of us is. So here we all are this morning, favored of God, loved by God, regardless of whether we feel it or deserve it. A great gift has been placed in us, a gift that carries with it unlimited responsibility. How will we nurture this child? How will we bring it to birth? What is incubating in each of us is as individual and unique as each of us is—and it is divine. How will we welcome this child? Mary’s response must be ours: “Here we are, the servants of the Lord. Let it be with us according to your Word.”

December 17, 2020
What to Say when Any Word is the Wrong Word
Next Post 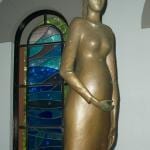