We Have Met the Nazis, and They are Us

We Have Met the Nazis, and They are Us January 15, 2019 vancemorgan

We ought not to hide from ourselves that Nazi Germany is a mirror for all of us. What looks to us so hideous is our own features, but magnified. Simone Weil in 1937

Yesterday was the Spring 2019 semester’s first day of classes on my campus. Tomorrow will be the first meeting of one of my favorite courses, an interdisciplinary colloquium that I team-teach with a colleague from the history department: “‘Love Never Fails’: Grace, Truth, and Freedom in the Nazi Era.” I wrote a bit about this course in my post on Sunday:

This is the fourth time in the past six years that Ray and I have offered this colloquium; it is the most wildly popular course I have ever taught, filling up immediately on registration day with a list of dozens of students on a waiting list hoping to get in. 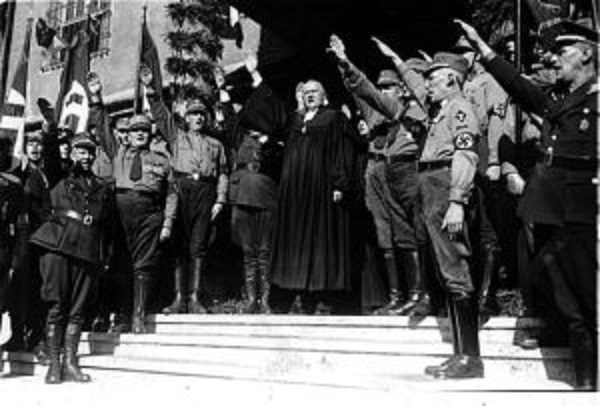 I would love to think that the colloquium’s popularity is due to Ray’s and my teaching excellence, but the real reason everyone wants to take this course is simple: Nazis sell. Put the adjective “Nazi” together with any course content—Nazi Accounting, Nazi Calculus, Nazi Basket Weaving—and the class will fill up immediately. Like the worst train wreck ever, people can’t look away from the Nazis. Just about everyone agrees that they represent the worst that human beings can be, but still—or perhaps because of this—no one can look away.

This is not just the case in the educational world. Mention the Nazis in any public conversation and people’s ears prick up. Describing someone’s activities or attitudes as Nazi-like is the third rail of public discourse, a bridge too far even in the most vigorous debate. And yet it happens on a remarkably regular basis. The Nazi card has been played frequently by all sides during the Trump political era, including a bit over two years ago when the then President-elect criticized the intelligence community for not prohibiting an unsubstantiated document containing damaging allegations from being published. “Are we living in Nazi Germany?” Trump tweeted, a question that immediately met with outrage from many quarters, while at the same time attracting prurient interest because the Nazis had been invoked.

Playing the Nazi card has actually been a popular activity on all sides of political arguments for the past fifty years. Not long ago, I read  Stephen Prothero’s Why Liberals Win (Even When They Lose Elections); in his final chapter on culture wars in this country from the 1970s to the present, he mentions at least a half-dozen different times when one side of a given squabble has accused the other side of Nazi-like behavior or beliefs.

Why do we do this? I’m sure that many articles, books, and dissertations have been written on the psychology and politics of Nazi-shaming, but on one level the attraction is obvious. If X accuses Y of Nazi-like behavior, X is intending to either derail the conversation entirely or deflect it in an entirely new direction. Except for skinheads, no one takes Nazi attributions lying down. To accuse someone of being or acting like a Nazi is to accuse her or him of being on the very outer fringes of humanity, perhaps having even crossed the line into non-humanity. But my impression is that people seldom mean it when they play the Nazi card—it’s just the worst thing the person can think of to say in the moment. Accusing someone of Nazi-like behavior is like accusing them of being an evil alien—and that’s a problem. Because the Nazis were people, no different at their core than the rest of us. We forget this at our peril.

One of the most important tasks Ray and I will seek to accomplish early this semester is to convince the students that the Nazis were not aliens, monsters, or mutants. To consider them as such is to remove the possibility, at least theoretically, that we share anything in common with them. We assign significant portions of Mein Kampf, study the NSDAP’s “Twenty-Five Point Program” (the Nazis’ socio-political “platform”), and consider the lengthy chapter on Hitler’s tortured childhood from Alice Miller’s For Your Own Good, because understanding the Nazis requires first understanding that they were human beings just as we are. Human beings with histories, experiences, commitments, worries, fears, desires, hopes and dreams. Human beings who hoped for a better world than the one they believed had been unjustly imposed on them by outside forces. Studying the Nazis is remarkably relevant to studying our present political and social situation, because in both cases we are studying the same thing–ourselves.

For those who believe that their religious faith provides them with a firewall against the elements of human nature regularly on display during the Nazi era, think again. The story of the Christian churches, both Protestant and Catholic, in Germany during the time of the Nazis is both sobering and disturbing. People like Lutheran minister Dietrich Bonhoeffer and Franciscan priest Maximillian Kolbe are examples in our colloquium of persons who exhibited grace and truth during the Nazi era, but they were voices and persons of resistance. A significant majority of Christian pastors and priests, ministers and bishops, as well as the majority of the good citizens in their their German Christian congregations, not only supported the policies of Hitler and the Nazis but also truly believed that this support was sanctioned and supported by their commitment to their Christian faith. It did not turn out to be that difficult for millions of good Germans to find a way to be both believers in Christianity and supporters of Nazism.

I spent a great deal of time on this blog over the past three years wondering how evangelical Christians, millions of Catholics, and many others with whom I share my Christian faith could square their faith with their political commitments and how they voted in the 2016 Presidential election, as well as their continuing support of Donald Trump. I’m still wondering, but returning to the Nazis reminds me that human beings can convince themselves that absolutely anything is true, and can readily believe that incompatible commitments and values are actually compatible, if they are sufficiently motivated by their experiences, circumstances, fears, and anger to do so.

That includes me. The next time the Nazi card get played publicly, we would do well to not treat it as twisted entertainment or the tweetings of uninformed people with too much time on their hands. As offensive as it may sound, each of us has a Nazi inside of us—only regular vigilance and a constant refusal to be duped or complacent can silence it. As Pogo told us many years ago, we have met the enemy—and he is us. 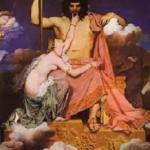 January 17, 2019 Know Your Bible, and Know Your Greek Mythology
Recent Comments
0 | Leave a Comment
"I'm glad that you've found a way that works for you. There are many reasons ..."
Vance Morgan When the Bible is Not the ..."
"My question to you is why havent you left christianity? Christians are constantly pushing their ..."
Brianna LaPoint When the Bible is Not the ..."
"You can get app from the producers for your smart device and see all the ..."
Kirk Janowiak Do You Want to be Healed?
"Thanks for sharing your story! Here is a link to their website. You can watch ..."
Vance Morgan Do You Want to be Healed?
Browse Our Archives
get the latest from
Freelance Christianity
Sign up for our newsletter
POPULAR AT PATHEOS Progressive Christian
1 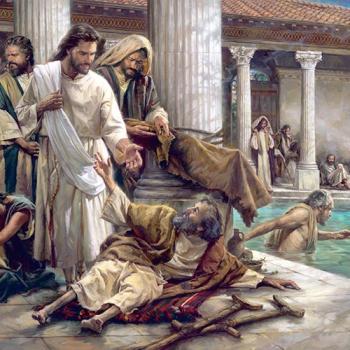