What Does the Lord Require? More Cowbell

What Does the Lord Require? More Cowbell August 10, 2021 vancemorgan

Guess what? I got a fever, and the only prescription is more cowbell. Bruce Dickinson

Regular readers of this blog know that I very seldom make it through any post without refering to something from the Bible. This is partially because I know the book well; extensive study and memorization of scripture beginning at an early age was a required part of the religious world I was raised in. More often than not, I use the Bible as a tool to push back against Christians who worship the book, attempting to demonstrate that—as any book written by human beings—the Bible is subject to as many interpretations and applications as there are interpreters and appliers.

But I do take many portions of the book very seriously. I go to the gospels most frequently, but for my money, the best one verse expression of the heart of the Christian faith is from the Jewish scriptures, written by the prophet Micah centuries before Jesus ever showed up. Micah 6:8 is undoubtedly the verse I have quoted most often over the years in this blog

What does the Lord require of you? To do justice, to love mercy, and to walk humbly with your God.

Not surprisingly, I almost peed my pants laughing the first time I saw this: 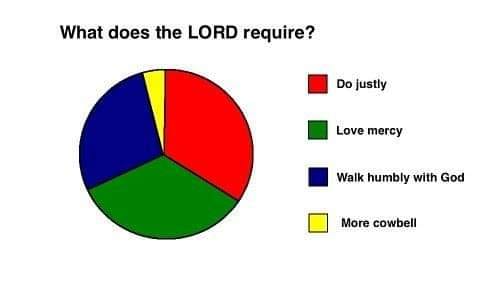 The reference, of course, is to one of the greatest skits ever from Saturday Night Live in 2000, where the Bruce Dickinson (played by Christopher Walken)—who says that “I put my pants on just like the rest of you–one leg at  time. Except once my pants are on, I make gold records”—guides the iconic rock band Blue Oyster Cult as they record their mega-hit “Don’t Fear the Reaper.”

Hilarious throughout, one of the funniest features of the skit is how much difficulty Jimmy Fallon, Chris Kattan, and Horatio Sanz have not cracking up at Will Farrell’s over the top performance (something that, apparently, was far more outrageous than anything he had done in rehearsal). The “more cowbell!’ meme went viral shortly after the SNL skit first played in April 2000. In a 2007 interview, Christopher Walken reported that after ordering a salad for lunch at a Singapore restaurant, the waiter delivered the salad and said “You know what this salad needs? More cowbell!” Will Farrell has frequently apologized jokingly for ruining Christopher Walken’s career. But even for a respected and serious actor, it’s hard to overcome the claim that “Babies, before we’re done here, y’all will be wearing gold plated diapers.”

The theme of the need for irreverence and “more cowbell” gets a fascinating treatment in the 1984 classic film Amadeus (one of my top five favorite films). Wolfgang Amadeus Mozart has been commissioned to compose a new opera for the royal opera of Emperor Joseph II of Austria. The problem is that the libretto for Mozart’s proposed opera is based on The Marriage of Figaro, a controversial play by Beaumarchais that portrays the servant and peasant classes as more intelligent and humane than their aristocratic and royal “betters.”

Members of the cabinet are appalled and, along with the Emperor, push back against Mozart’s plans. One of the cabinet member says “Mozart, music is not the issue here. No one doubts your talent—it’s your judgment of literature that’s in question. Even with the politics taken out, this would remain a vulgar farce. Why waste your spirit on such rubbish? Surely you can choose more elevated themes.” An exasperated Mozart complains in response:

Elevated! Elevated! What does that even mean, elevated? I am fed to the teeth with all these “elevated” things! Old dead legends? Why must we go on forever writing about old dead legends? . . . Come on, now, be honest. Which one of you wouldn’t rather listen to his hairdresser than Hercules? Or Horatius, or Orpheus? People so lofty they sound as if they shit marble!

Fortunately the Emperor’s curiosity is greater than his caution, and after some convincing he gives Mozart the green light to write one of the greatest operas ever composed.

I’ve always loved this scene from Amadeus, because it directly parallels the problem I had with representations of Jesus in the religious world in which I grew up. In artwork, music, literature, and general discussion, Jesus was always portrayed as someone so lofty that it sounded as if he shit marble (or, as I might have said, whose crap didn’t stink—now there’s irreverence and more cowbell for you). I’m not going to get into the “fully divine/fully human” thing here—I’ve done that occasionally on this blog. Suffice it to say that I’ve always leaned strongly in the direction of Jesus as human.

This is why I so thoroughly enjoy and appreciate what The Chosen, a crowd-sourced multi-season treatment of the life of Jesus, is doing in its portrayal of Jesus. Two seasons of the series are now complete (with a proposed five or six more to come); Jesus, as well as the disciples, are presented as full-fledged people rather than stained glass representations or cardboard cutouts. The writers pay full attention to Jesus’ divinity—he performs miracles regularly, just as he does in all four gospels. But he also is thoroughly human. Jesus is just about always late for his appointments and rendezvous, he is often distracted from his stated plans for the day by something or someone interesting on the side of the road, he is terrible at giving or following directions, and he has a wry and subtle sense of humor. Just like a lot of people I know. I detect a subtle cowbell ringing behind the scenes—let’s stir the waters a bit.

The disciples in The Chosen behave just about like any random collection of people who leave their established lives to follow a charismatic person to who-knows-where would act. There are personality clashes, ego competitions, and there is an incessant jockeying for position as to who will be Jesus’ favorite. But to be honest, if I was writing the script, I would ring the cowbell even more vigorously.

In my imaginary screenplay,

The next time you find yourself being far too serious, even about serious matters, remember that you need more cowbell. We all need to heed Bruce Dickinson’s challenge to Will Farrell and his cowbell playing: “Really explore the studio space, baby.” And have fun doing it. 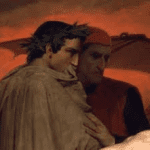 August 12, 2021 What is the Point of a Professor?
Recent Comments
0 | Leave a Comment
"Please demonstrate precisely how the absence of belief -- atheism -- is a 'power of ..."
Wile F. Coyote A Question for Atheists and Theists: ..."
"Yup. These things tend to boil down to a fundamentally different conception of how the ..."
Iain Lovejoy Why We Believe Things that Aren’t ..."
"The good bishop is indeed the one who made "To exist is to be perceived" ..."
Vance Morgan Why We Believe Things that Aren’t ..."
"I don't want to just leave you hanging, but I'm beginning to think we're too ..."
Illithid Why We Believe Things that Aren’t ..."
Browse Our Archives
get the latest updates from
Freelance Christianity
and the Patheos
Progressive Christian
Channel
POPULAR AT PATHEOS Progressive Christian
1 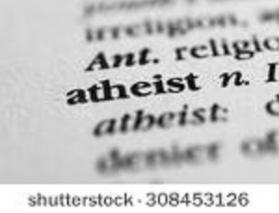 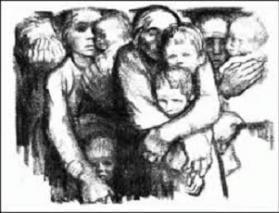