What the Scots Think Of Donald Trump

What the Scots Think Of Donald Trump July 13, 2018 vancemorgan

Donald Trump’s visit to the United Kingdom is underway—something that makes me very happy that Jeanne and I vacationed in Scotland at the end of last month, thereby escaping most questions about why he is the American President, what the hell is wrong with Americans for allowing this to happen, and similar unanswerable queries that we were able to largely avoid during our wonderful nine-day stay. 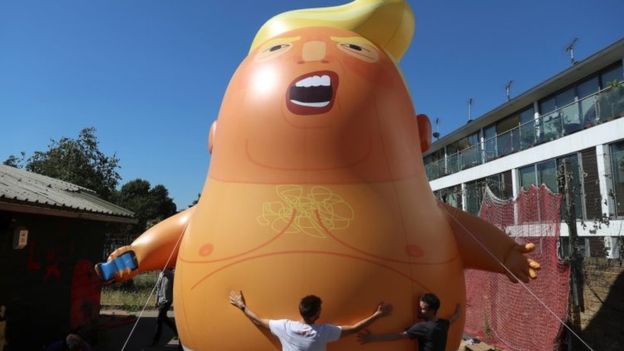 I told friends and family before we left that we were going to do our best not to let anyone know that we are from the States while in Scotland; interestingly, it turned out that the Scots themselves made that relatively easy. It was, of course, clear to everyone we met that Jeanne and I are not from Scotland as soon as we said anything, although we did meet many ex-patriots while there (something we considered the possibility of becoming several times during the vacation). But the Scots are some of the nicest and most accommodating people we have ever met, regularly asking pleasantly “Where are you folks from?” rather than the more direct “You folks are from the States, aren’t you?” which understandably might have been accompanied with a bit of an attitude.

During a visit to one of the several whiskey distilleries that served as the organizing locations for much of our vacation, Nadine, the person running the front counter, told us that she and others had been coached on how to engage with people whose accent and/or demeanor suggest that they are from the other side of the pond. As it turns out, Scots have a difficult time distinguishing on the basis of accent between Americans and Canadians (they are apparently unaware of the difference between the American “abowt” and the Canadian “aboot”). Accordingly, Nadine said, she was advised either to simply ask “Where are you from?” or, in the alternative, to err on the side of Canada. These days, it turns out that Americans don’t at all mind being mistaken for Canadians, but Canadians take great umbrage at being mistaken for being from the States. I wonder why that is.

Whenever we revealed that we are indeed Americans, Jeanne often followed the revelation up by assuring whomever we were talking with that “we don’t like Trump.” Thankfully, we never did get into a political conversation with anyone. That does not mean, however, that the general attitude toward our current President in Scotland was not obvious throughout our travels. This sign, for instance, was outside a restaurant in Fort William: 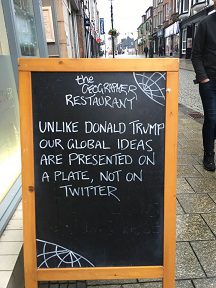 A gentleman at one of the many bars we visited told us of when Trump, who (unfortunately) has Scottish heritage, told the Scot from whom Trump wanted to buy coastal property for golf course development that part of the deal would be that the windmills off the coast “would have to go” because of their “ugliness.” The Scot told Trump to “bugger off,” and that was the end of that particular deal. I think that “go bugger yourself” was the general attitude we encountered on vacation concerning Trump.

We spent the final two days of our vacation in Edinburgh, walking the Royal Mile from the cliffs of Edinburgh Castle on the west end to Holyrood Castle at the east end. Adjacent to Holyrood Castle is the Scottish Parliament complex. As it turned out, Parliament was in session that day, and we got to observe forty-five minutes of Scottish government in action in the most strikingly beautiful hall for such purposes I have ever seen. 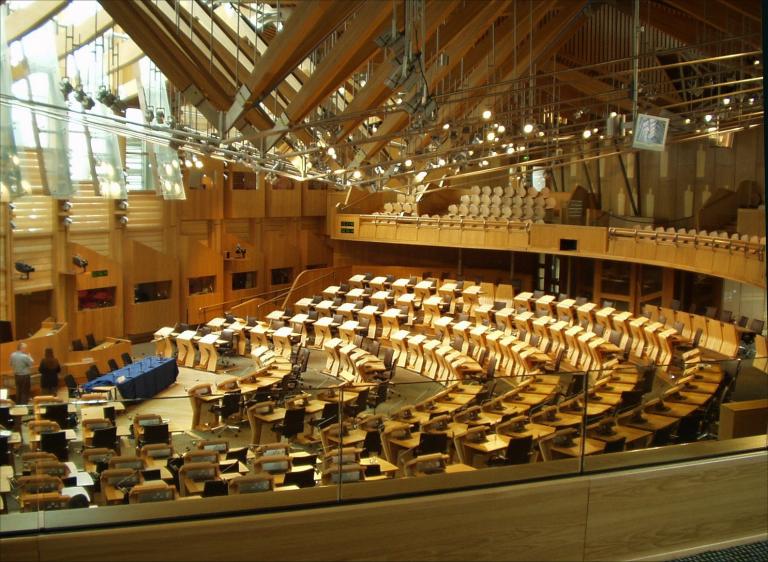 We listened from the observers’ gallery as Nicola Sturgeon, the First Minister of Scotland, fielded questions from elected representatives from various parts of the country we had fallen in love with in just a week.

It became clear in short order that people in Scotland share many of the same concerns and problems that we struggle with in the States. One minister, for instance, vigorously pressed the First Minister for an explanation of why she fully supports the mandatory standardized testing of five-year-old kids in their first year of school. Partisanship raised its head (there are more than two important political parties in Scotland) when economic issues were up for discussion. But nothing united the room, representatives and observers alike, more than when one of the ministers asked the First Minister about the upcoming visit of Donald Trump to the United Kingdom.

“Madame First Minister,” the representative asked, “do you think it is appropriate for the United Kingdom to roll out the red carpet for Donald Trump’s upcoming visit, given the news of the past months and the pictures we have all seen this week?” Jeanne and I had deliberately stayed away from the news over the preceding week that we had been in Scotland, so we first learned of the pictures of immigrant children, separated from their parents and in cages, during First Minister Sturgeon’s response. In a two or three minute statement, the First Minister made it clear in no uncertain terms that not only was it inappropriate for the United Kingdom to roll out the red carpet for Donald Trump, but it was arguably inappropriate for him to be visiting the UK at all, given the latest news from the U.S.’s southern border. Although those of us in the gallery were advised ahead of time that reactions from the gallery were not welcome while Parliament was in session, gallery observers joined the representatives with thunderous applause and thumping of desks in response to the First Minister’s statement.

Last Sunday’s edition of “The Scotsman” (Scotland’s leading national newspaper) included an article called “Donald Trump Proved Wrong on Impact of Wind Turbines in Scotland.” Trump predicted in 2012 that increased wind turbines in Scotland would have a strongly negative effect on the Scottish tourism industry.

Windmills are so unattractive, so ugly, so noisy and so dangerous that if Scotland does this, I think that it will be in serious trouble . . . If you dot your landscape with these horrible, horrible structures, you will do tremendous damage. If you pursue this goal of having these monsters all over Scotland, Scotland will go broke.

The opposite has turned out to be true; Scotland’s tourism industry has exploded positively in the past six years. The article concludes with a quote from Scottish Green activist Patrick Harvie containing insights that more and more Americans have come to recognize as entirely accurate.

As subservient Tory politicians get ready to roll out the red carpet for an increasingly fascist president who puts children in cages and brags about sexual assault, we should remember that this man is as delusional as he is dangerous, and cannot be trusted on any subject . . . We’ve long challenged his bluster and bullying, and we will continue to support American friends and colleagues working to end Trump’s chaotic rule. 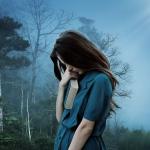 July 15, 2018 What If God and Morality Have Nothing to Do with Each Other?
Recent Comments
0 | Leave a Comment
Browse Our Archives
get the latest from
Freelance Christianity
Sign up for our newsletter
POPULAR AT PATHEOS Progressive Christian
1 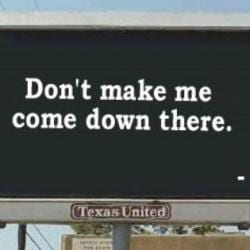